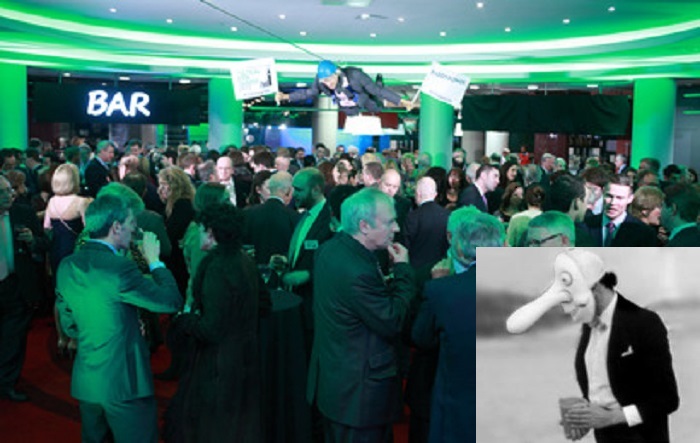 We were delighted that our friend Terry Stiastny triumphed at the Paddy Power Political Book Awards last night, beating Andrew Marr, James Naughtie and others in the Fiction category for her fine novel Acts of Omission.

The Dabblers went along to the swanky reception party, which was attended by every political journalist and Parliamentary grandee you can think of.  Unfortunately, so did Noseybonk, who managed to spot an outsider who had somehow penetrated the Westminster Bubble…

Stately, plump Guido-Paul Fawkes came from the stairhead, bearing a bowl of bubbly and a pair of predatory eyes, crossed.

His tum-tum led the way, followed at intervals by the rest of him.  He beady-eyed the throng, left and right. As a notorious outsider and maverick, nobody at the Political Book Awards would ever recognise Guido-Paul, he said to himself with an inner cackle.

For like Zorro and Banksy he was a shadow, a phantom, a legend. A glinting blade in the night honed to prick over and again the Westminster Bubble, and nobody inside that Bubble knew his corporeal form. Not Lord Adonis, not Andrew Mitchell, not David Davis, not Alan Johnson, not Charles Clarke, not Chris Bryant, not Neil Hamilton, not any of these corrupt Westminster scumbags.

I am perfectly invisible, he said, as he sidled like a seacow through the pinstriped swamp, bellybarging grandees east and west, knocking elbows, sending nibbles sailing from fingers,  champagne flutes descending, vin rouge sloshing over crisp white shirts, strappy dresses snagged and ripping on his sharp bits, the curses and yelps that followed in his wake drowned by the room’s party roar.

And ghostlike, the glutinous ghost of a manatee, he insinuated himself amidst a squabble of op-ed hacks, the better to earwig. None recognised him: not Matthew Parris, not John Rentoul, not Isabel Hardman, not Hugo Rifkind, not Michael Crick, not Julia Hartley-Brewer, not Nick Cohen, nor yet Andrews Marr and Neil. None would dare dream that he, Guido Stained-Fawkes, scourge of old media, destroyer of newspapers and their cosy Bubble, could ever have acquired, through machinations devious and expensive, a ticket to their ball and even now be standing slap in their midst.

They see me yet they see me not. And they fear me. He snickered inwardly at the glances they gave, all in the same sequence: puzzlement, confusion, then the faint shiver of unnamed horror as they turned quickly away. They fear me and they know not why. For I am Red Death at the Masque. I am Banquo at the feast. I am Voldemort in Hogwarts.

Then, when he had what he needed he slipped away, tum-tum first, as a walrus bludgeoning through penguins, and back to his lair to write his devastating bomb. And that night he dreamed his dream again, and he was Andrew Neil snuggled up on the sofa with Abbot and Portillo, and his heart sang and it flew up, up and away like a nightingale over the lonely squares and turrets of Westminster.

One thought on “Noseybonk: Guido at The Political Book Awards”