Tap tap tap. What is that determined tapping? Tap tap tap go the elegant fingers of Nina, loyal housekeeper to the Mayor of London, on the computer keyboard.  A frown crinkles her handsome Latvian features. She is on the trail of a lead.

Tap tap tap. What is that so-timid tapping? Tap tap tap go a pair of plump knuckles on the door. “May I come in?” says a small, infinitely sad voice. It is Boris, coddling a brood of stuffed bunnies (there’s Hazel, Fiver, Bigwig, Geoffrey Howe and Silver).

“Mr Boris, come in of course. You are feeling more bucked?” She musses his thatch, fondly.

“Not bucked, Nanny, not yet. But the Black Rabbit has popped off out of sight…for now at any rate. Though he’s not far away, I can feel the beating of his wings. What are you doing, Nanny?”

“I am detectiving, Mr Boris. Like the Misses Marples. Tell me, Mr Boris, what do you know of Grayson Ellis?”

“The poet? Well not much. We did him at school…. I say, Nanny, hang about. I know that look. What’s forming in that splendid cerebral cortex of yours?”

“Someone is a Grudge for you, Mr Boris. Someone to do with Grayson Ellis. That’s why they send you that bad, bad poem by Messiah White about the Spot, to steal your Shtick. But I am going to discover the bottom of this for you, Mr Boris, and then we will vanish the Black Rabbit for ever. Amen.”

“Oh, Nanny. What would I do without you? “ says Boris. After a short pause he adds, “Rumpeta,” and raising the vuvuzela to his lips he tentatively parps.

Tap tap tap. What is that so-sprightly tapping? Tap tap tap goes Noseybonk, umbrella-dancing down an air vent like Alex de Large’s nightmare of Gene Kelly, off to hop onto the crooked back of Erica, his tame vulture…

… which whomps away over the city and up, up, soaring highkite on a winddraught, bearing little leering Noseybonk over the M1, the M6 Toll and the M6, Chesterwards, Chesterwards, dropping here at last down, down, dipping down over the serene and symmetrical citadel of Little Dubai, a fractal warren of leisure hubs and helipads, where the Premiership foopball players live…

…Tootling along an empty dual carriageway towards Little Dubai’s immense gates is an open-top Satsuma Castanet XR4 Turbo. Kissing Erica goodbye, Noseybonk leaps from her crooked vulture back and umbrellachutes down to land moistly in the hairgrease of its driver. At the gates the driver halts while robotic guards scan his eyeballs, fingerprints, liver, lungs, buttocks, ankles, wallet, spleen and solar plexus. Satisfied, the robots stand aside and we pass…

Built according to blueprints discovered amidst the testatory documents of the late JG Ballard, Little Dubai is home to the top 17% of wage-earners at the top 2% of British foobpall clubs, namely Liverton, Everpool, Manchester United, Lokomotiv Chelsea, Melchester Rovers and Arsenvilla Hotspots. Words alone cannot convey its soul-obliterating naffness. To get an idea, you would have to spend a week in a Milton Keynes branch of MegaBowl watching The X Factor with Richard Dawkins.

To our right, in the secondmost prestigious penthouse of PoleDance Heights, Ashley Cole reclines in a vibrating sofa, awarding a little Playstation version of himself a maximum 100 skill points.

Alone in the Games Room of his Plastic Mansion, John Terry pots endless pool balls to the sound of Elton John’s latest on MTV Adult Contemporary 2. He will spend an infinite retirement this way.

But our driver passes through all this bleak comfort into the twisted heart of Little Dubai. His name is Paul Stretford and he is the Agent of Darkness for the most celebrated Earner in British foopball. Noseybonk rides on his shoulder as Stretford parks the Satsuma by the side of a moat, alights and rumbles in the boot for a huge, seambursting suitcase. This he drags in stifled agony across the drawbridge, through the courtyard, past the Hall of Mirrors and down the secret tunnel into the jungle. On we go, panting and heaving through ever-thickening undergrowth. The air is fetid. Deep drums roll distantly. Screeches and rustles. Eventually a clearing. Stretford winces at the vast wooden structure disappearing heavenwards before him. Hacking his throat clear, he calls out: “Wayne! Wayne it’s Paul, mate. I’ve got yer fifties!”

A guttural roar shakes the jungle  and a ladder of rope tumbles from the impossible heights of the treehouse to dangle before Stretford’s sweaty  mass.

“Aw come on, Wayne! Can’t you come down? Do I have to shift it all the way up the bladdy ladder agai-“ A second terrible roar silences him. Cursing, he begins the awkward ascent, wobble grimace gnash wail haul grapple dangle reach twist stretch heave. Finally, high in the treetops, a platform, and a stagger through a bamboo corridor to the Great Chamber. Stretford stops, starts, emits a low whistle. “Jeez, Wayne…” he mutters. “You have been a busy boy.”

Wall to wall, floor to roof, a hundred foot high, the Great Chamber is plastered in red and grey. At its centre is a towering figure, or totem, constructed in the same colours from what looks like papier-mâché. “Jeez, Wayne…is it a, a self-portrai-?”

Stretford never finishes the sentence, for swooping horribly down the side of the chamber, arm over arm like a spidermonkey from the ledge where he makes his nest, comes Rooney, clad in a filthy loincloth and clotted ginger hair, trailing unspeakable ooze. With an animal grunt he snatches the suitcase and vaults away snarling to vanish into the darkness behind the Papier-Mâché Man.

A scrotumtightening roar from deep within the bowels of the Man shatters the jungle…“MORE. FIFTIES.”  Then silence.

Trembling, Stretford totters back to the ladder. Glancing back over his shoulder he gapes again at the great pagan horror that stands in the chamber. It is barely homo erectus;  a hellish Shreknosed troll in football boots and no neck. It is papier-mâché, but instead of newspaper there are countless fifty pound notes.  And instead of glue there is the unspeakable ooze secreted from the pores that cover Rooney’s back and forearms.

Even Agents of Darkness have their limits; Stretford runs retching from this unholy place. Leaving him to his descent, Noseybonk perches on a branch and whistles for his vulture. 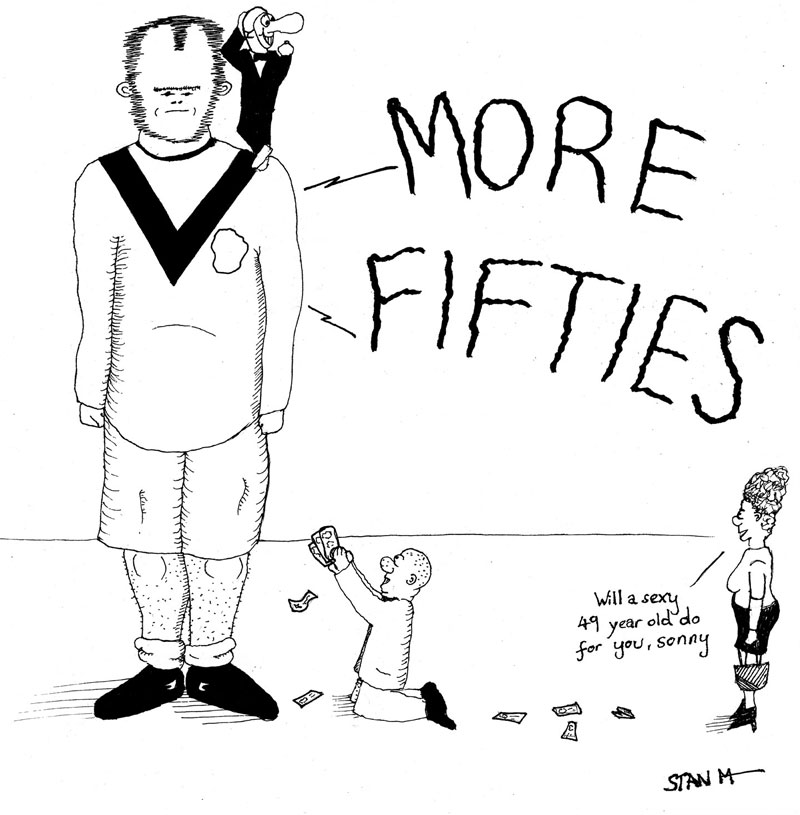 Black rain thrashes the cobbles of Knocknee Alley, Soho, outside the discreet side entrance to the The Kipper Klub. It is midnight and two figures are hunched against the deluge, waiting to be admitted. Noseybonk, grown for the hell of it to the height of a mammoth, is nonetheless invisible behind the iron firestairs. When the door is opened and the pair shuffle inwards, Noseybonk leans to press one great glassy eye against a high window and sees all.

The men are nervy and shiftous. Slavoj Zizek, the  Deranged Academic,  bulky with bedraggled beard, beckons his companion, smaller and boiled egg-headed, to follow into the ill-lit room. In a tallbacked armchair a mysterious third party sits in darkness.

“Chief,” says Zizek. “This is Messiah White. He desires to join us.”

White coughs timidly as the gaunt figure in the chair leans forward into the cheerless light. Like Tollund Man he has an elongated skull, but his bright slant eyes tell of wicked genius. His spindlefingers interlock in a steeple. The voice is a Belfast scrape.

To be continued. Noseybonk can see you. Illustration by Stan Madeley.