[The story so far… Boris has been haunted by the Black Rabbit; Slavoj Zizek has defeated Rod Lidl in an exclusive interview; Grayson Ellis is more elusive than ever. So elusive, in fact, that he doesn’t even appear in this episode…]

The G writes a song

Across the face of this sad planet Adult Contemporary singer-songwriters are slumped at white pianos, weeping for an absconded Muse.

In a Holland Park mansion Elton John flings absurd curses at Bernie Taupin, who is morose and emasculated. In Marin County, California, Al ‘Year of the Cat’ Stewart has got stuck on Liege and Merlot in his interminable alphabetically-sequenced concept album constructed around the themes of fine wine and the Battles of World War One* (Ypres and Zinfandel seems a long way off). And in a Hawaiian shack built from recycled surf boards and the bleached bones of hot, gullible chicks**, Jack Johnson is dipping his toes into the ocean and humming ‘a babba dee baba da bee dooby doo, be dooby doo doo’ with intense hatred. All are bereft…

All, that is, save one… “K!” cries Art ‘The G’ Garfunkel in ecstasy from the Music Room of his New York penthouse. “K come in here! I think I’ve written a song!”

Kathryn (Kim) ‘K’ Garfunkel (Cermak),as she pedantically insists on being known publicly, is in the den compiling a list of Art’s Interesting Eccentricities for his website. Noseybonk is staring from a framed Bookends cover on the wall and sees all. So far K’s list consists of:

1) thinks of America topographically
2) keeps a list of every book he has ever read from 1968 to the present day
3) has an intense need for creative and even flamboyant expression, thanks to Leo rising with Pluto
4) put JS Bach’s The Christmas Oratorio, Arioso No. 38 (soprano chorus, bass) at both numbers 3 and 4 in his Top 23 Favourite Classical Things
5) calls himself ‘The G’
6) has written a poem about Wales
7) does not discriminate against the disabled
7) his hair

On hearing the ecstatic yelps of her husband she drops her crayon and bolts into the Music Room. “You’ve written a song? But Art that’s wonderful! Although you have collaborated with and directly inspired many great songwriters including but not limited to Paul Simon, and although your unique vocal stylings have added new depths and dimensions to the songs of others – again, including but not limited to Paul Simon –  without which they would never have achieved the levels of success and critical acclaim that have always been unfairly denied to you (popular as you are), until now you have not been known as a songwriter despite your prowess as a poet, apart from co-songwriting credits with Buddy Mondlock and Maia Sharp on the 2002 album ‘Everything Waits to be Noticed’, a work largely inspired by your prose-poem collection ‘Still Water’!” she exclaims.

“That is true, K”, says Art. “But wait til you hear this…” Striking the piano keys at random, he warbles…

It can be a bare and lonely feeling to outgrow the capacity for self-pity,
She was so private, there were things she even forgot to say to herself
Yabba yeah yeah hey!
The problem with people who would be outstanding in a shipwreck
is that there aren’t – in the end – so many shipwrecks, so many shipwrecks,
Lie la lie! Lie la lie lie lie la-lie
When it finally briefly happens, happiness can feel very worrying,
A decline in a narcissistic desire for self-promotion can easily lead you to be mistaken for boring.
Mmmm mmmm yeah hey yeah yeah…..

He hammers notes in an approximation of a flourish of a finale. “Well what do you think, K?” he asks with confidence.

K is awed. Tears gush from the relevant glands. “OMG, Art, that is so beautiful. So true, so profound and so beautiful…I’m going to update the website right now. Art ‘The G’ Garfunkel: Adult Contemporary Singer-Songwriter.”

She trots to the den and Art smiles after her, in triumph and fondness. His happiness will not last. Noseybonk knows all secrets. The G has been peeping on the internet and plagiarising the tweets of thin-skinned philosopher Alain de Botton to make what he thinks will be Adult Contemporary hits.

Noseybonk destroys for reasons beyond your ken. He taps at a tiny internet-enabled device. Re-tweet! Re-tweet! @BernieTaupin; @JackJohnson; @Al_Year_Cat_Stewart1976…. All are now followers of @AlaindeBotton and his twittered profundities….

“I’ve found my Muse!” they cry at the same moment, in Holland Park; in Marin County, California; in the Hawaiin shack built from boards and bones.

Bernie scribbles furiously on a silk handkerchief and tosses it to the still-cursing Elton. “Here, put this to one of your bloody tunes, you old tart,” he says collaboratively.  Elton pauses mid-tantrum, reads It can be a bare and lonely feeling to outgrow the capacity for self-pity.  “Oh I say darling that is good…wheel me to the piano!”

Back in New York, The G is yet unaware of the inevitable thwarting of his hopes. He sees something in the corner of his eye and turns, but nothing is there. He feels a strange, intolerable tickling in his ear and beats it with his palm…but it is gone. Noseybonk has retweeted into his shell. 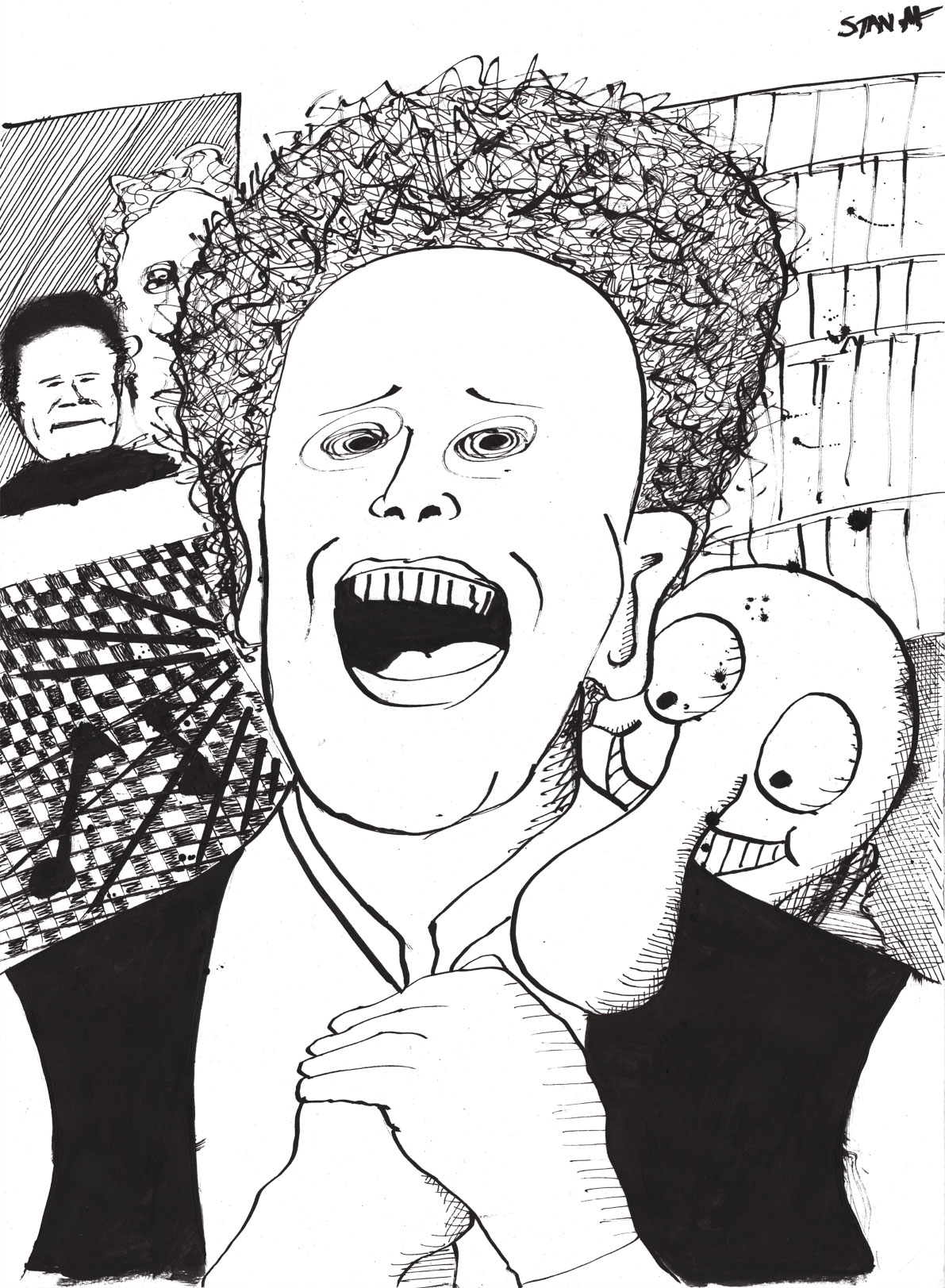 According to sauces close to Ed Balls…

In case he happens upon an unexpected pie or pasty when roving, Ed Balls, Shadow Home Secretary, always carries emergency sachets of ketchup (for pies) and HP fruity (for pasties) in his breast pocket. Noseybonk, shrunk to the size of a baby rat, is nestling amongst these condiments and hears all, as Balls pounds down Victoria Street belching dictation at Pamela Spanks, his Permanent Dogsbody, who skips in his wake.

“Ms Cooper is not only a hardworking and devoted MP for Normanton, Pontefract and Castleford, she has a comprehensive grasp of the intricacies of international diplomacy and a sound record on fiscal matters both local and national. She will make for an incisive Shadow Foreign Secretary who will scrutinise Government affairs thoroughly and call them to account when necessary…That’s why I married her.”

Pamela searches in those scrunched eyedots for signs of ironic humour. There are none. Inside Balls’ office, strewn with soiled straw and family chickenbuckets, the plasma screen shows Ed Miliband speechifying. Balls glowers in bottomless hate. Look at that jammy fugger, with his voice like a hearing-impaired Vice-Chancellor with the sniffles.

“There is a defining difference between us and David Cameron – and that is optimism…” says the new Labour leader in his fugging voice, like a sixth-form debating captain gargling frogspawn.

“…We are the heirs to an extraordinary tradition, to great leaders who were above all the optimists of history.The optimism of 1945 which built the National Health Service and the welfare state.The optimism of Harold Wilson and the white heat of technology and the great social reforms of that government…” says fugging Miliband, with his voice like a choirboy with superglue for saliva.

“…The optimism of Tony and Gordon who took on the established thinking and reshaped our country…” with his voice like the back wheels of a Fiat stuck in a mudslide.

“…We are the optimists in politics today.So, let’s be humble about our past. Let’s understand the need to change…” with his voice like a village idiot after two and half elocution lessons.

“…Let’s inspire people with our vision of the good society.Let the message go out, a new generation has taken charge of Labour…” with his voice like a barrister with two tongues and no nostrils.

“…We are the optimists and together we will change Britain,” says the jammy fugger with his voice like a gastric band operation.

I. Will. Squash. That. Fugger!

Balls changes channels in loathing. On MTV Adult Contemporary 2 ageing singer-songwriter Billy Joel is addressing a white piano and singing that It can be a bare and lonely feeling to outgrow the capacity for self-pity… Balls switches off.

To be continued. All tweets are copyright of Alain de Botton and speechifyings of that bloke who writes Ed Miliband’s speeches. Noseybonk can see you. Illustration by Stan Madeley.

5 thoughts on “Noseybonk – 5. The G writes a song; Sauces close to Balls”