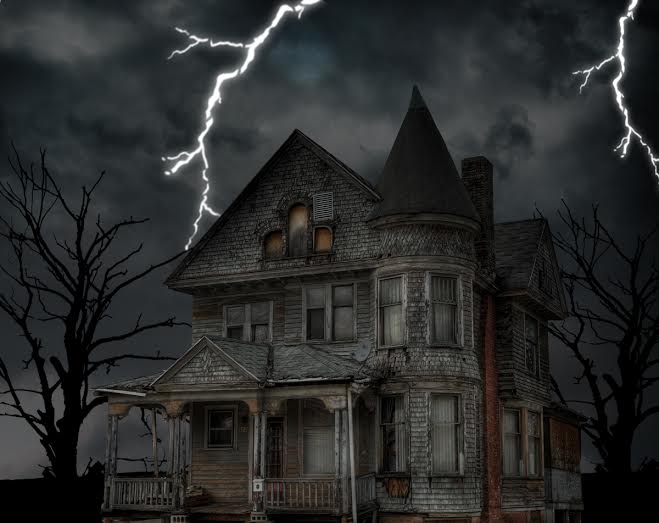 In honour of Halloween, Rita shares her own ghost and haunted house stories…

First I should stipulate that I don’t believe in ghosts, even though I’ve seen one. Nor do I believe in poltergeists or demonic possession or any of the other emanations of the paranormal world. I think psychics and spiritualists are quacks and exorcisms a kind of magic show, a ritual of tricks and distractions to bedazzle the gullible. But despite my determined skepticism about all things ghostly, I have had two experiences in my life that I can’t explain away by rational means.

First the ghost. Years ago when I was a convent school student some friends and I accepted an invitation to stay overnight in the convent during Holy Week. We would attend the special liturgies of the season and sing the Divine Office from Lauds to Compline each day in the convent chapel. From the nuns’ point of view it was a chance to groom us for possible vocations. For us it was a bit of a lark, a chance to creep about the deserted school at night and have midnight feasts in the sixth form common room. One night, after sneaking back to bed without being caught by one of the patrolling nuns, I lay wakeful in my cell, one of the partitioned off little bedrooms in a large dormitory. At the foot of the bed hung a curtain for privacy. Slowly a human form materialized from the curtain and stood silently by the bed looking at me. It was a young woman with cropped hair wearing a long white shift, which I supposed was a nun’s nightgown. I didn’t feel goose bumps or any kind of fearful reaction that might be expected in the presence of a ghost. Only a sense of great calm and peace. I blinked several times, testing to see if the figure was just a trick of the eye, an accidental pattern of folds in the curtain. But no, it was definitely a young woman. Time seemed to stand still as we looked at one another. Then slowly the woman dissolved through the curtain and disappeared.

I know there are many possible rational explanations for my ghost, not least the overwrought imagination of a teenage girl immersed in an intense religious experience including not very subtle pressure to consider life as a nun. Perhaps it was just a dream or one of the patrolling nuns checking up on us in her nightgown. All I can say is I know what I saw and I am convinced I was wide awake. But if my ghost was an emissary to summon me to the religious life it didn’t work. I never seriously considered becoming a nun, though two of my best friends entered the convent as soon as we graduated.

My haunted house experience was quite different. I didn’t see or hear anything, certainly not any of the traditional hauntings – no clanking chains or animated suits of armor, no antique portraits coming to life, no furnishings moving of their own accord, no ghosts flitting through moonlit hallways. It was more like a feeling, an intuition communicated by the house itself.

My story begins in 1988 when my husband and I bought a house, the one we’ve lived in ever since. It is certainly not the type of house you would expect to be haunted, just a typical suburban home built as recently as 1970. Even by American standards, where most ghosts date only as far back as the nineteenth century, this is far too young for hauntings. We met the original owner briefly at the real estate settlement. All I knew about him was that he was a widower, recently remarried and planning a move to California. We moved in two weeks before Christmas, combining the chaos of settling into a new home with the busy holiday season.

On our first night in the house I lay awake unable to sleep. Perhaps it was the excitement of the move or adjusting to a new bedroom. As I lay there a strange feeling came over me, a conviction that someone had died in this house. I tried to shake it off, dismiss it as fantasy, but the feeling was overwhelming. Well, I reasoned, the owner was a widower. Perhaps his wife had died here. But I dismissed this as unlikely on the grounds that most people who die in the prime of life do so in a car crash or in a hospital. The feeling returned on subsequent nights leaving me with a vague unease about my new home. But gradually, as I plunged into unpacking and organizing our possessions and decorating for Christmas, the house began to feel like my own. For long periods I forgot all about it. Then at unexpected moments the feeling would return as strong as ever. It often came upon me when I stood at the top of the stairs and gradually I became convinced that the owner’s wife had died falling down the stairs.

It was several years before I learned more. One day a neighbor I hadn’t spoken with before rang my doorbell after I came home from work. She thought I should know that my son and his friends were climbing on the garage roof and sliding down on trays while I was out. She was very talkative and insistent and before I knew it she was inside the house seated at my kitchen table. Perhaps my son’s exploits were just an excuse for her to finally tell me the dramatic story of my house, for how she segued from one topic to the other was a master class in a gossip’s conversational arsenal. She told me that the previous owner’s wife committed suicide with a shotgun in the master bathroom of my home. Her young son found her when he came home from school and ran to this neighbor’s house for help. Something strange we had noticed in the master bathroom was explained. There were several chipped floor tiles that looked as if someone had taken a hammer to them. The damage didn’t look like anything that could have occurred accidently. Except perhaps for a ricocheting bullet. So it was not the stairs but the master bathroom – just steps away from the bed where I had first felt the presence of death in the house. For some time afterwards I had to consciously push the bloody scene from my mind whenever I was in the bathroom.

I mentioned to another neighbor that I had finally learned about the suicide in my house. “Oh that woman has no tact,” she declared. “You would never have heard it from me.” But now that I knew she added fresh details. The young wife sinking into depression when her husband was diagnosed with cancer, a disease that ironically he survived while she did not. The guilt felt by everyone around her who never realized how desperate she had become. The troubled lives of her children, left reeling at the loss of their mother while their grief-stricken father underwent cancer treatment. My house seemed drenched in sorrow but I felt grateful that I hadn’t learned the truth right away. It may have been too hard to absorb this knowledge before years in the house made it feel like my own.

More years passed before the next revelation. It was time to purge our out of date kitchen and bathrooms of their 1970’s vibe. We hired a contractor for a complete remodel of all three rooms. On the day the workmen started the tear out of the master bathroom the supervisor came downstairs looking pale and shaken. “Can you come up and see something?” he asked. “Did anything bad ever happen in here?” I went upstairs with him, withholding any comment until I knew what he was talking about. In the bathroom the men had just removed a large mirror from above the sink. The wall behind was streaked with dark brownish red drip marks, unmistakably dried blood. The exposed surfaces of the bathroom may have long ago been swabbed clean of blood, but the mirror hid the last evidence of the violent death that had occurred here. I told the contractor the story of the suicide and pointed out the chipped tiles. He ordered the workmen to scrub down the wall and he never entered the bathroom again until the work was completed.

I’ve become used to living in a house with a violent history and long periods of time go by when I don’t think about it at all. But one thing still bothers me. The fact that I got such a strong feeling of a death on the stairs. Maybe it wasn’t an intuition about the past, but the future. I’m always very cautious and make sure to hold the handrail when I go downstairs.

2 thoughts on “Of A Ghost and A Haunted House”