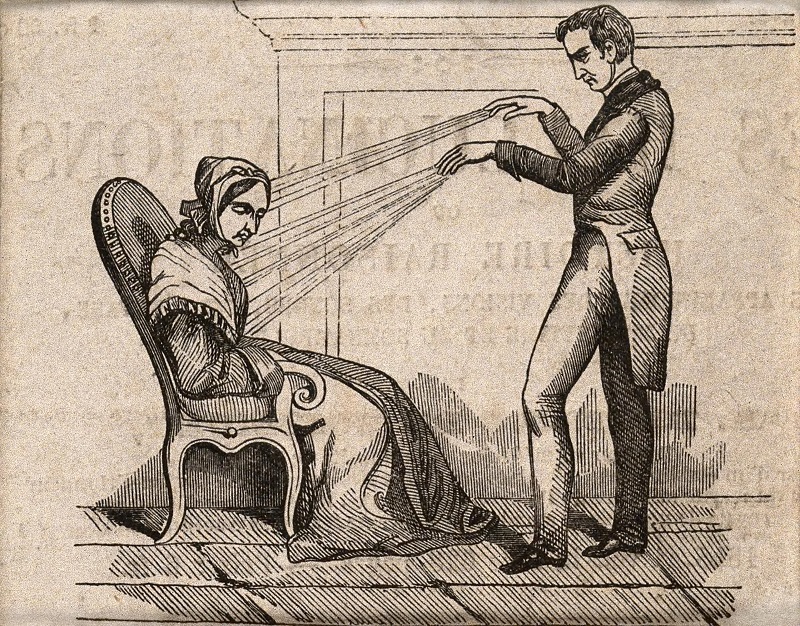 Herewith my report of the events of the 14th inst. If I am required at a future date to give similar accounts of the 14th ult. and the 14th prox. I will be happy to oblige, present circumstances permitting.

My name is Dr Slop and I am a mesmerist, duly certified as such by the Worthy Fellowship of Victorian Mesmerists. On the morning of the 14th inst. I received a summons to the bungalow adjoining the bungalow of which I had recently taken possession. I was given to understand that the maidservant of the bungalow, one Baines, of slovenly yet devoted disposition, had taken leave of her senses and was giving vent to her inner life, in spite of being a person of the lower orders. In a matter of such urgency I dispense with the social niceties and I swept with élan and steely determination out of doors without wearing a hat.

Upon opening the gate of the adjoining bungalow and proceeding along the garden path, I was disconcerted to encounter a cad. The cad began to explain that his dearest wish was to entice the lady of the bungalow into the garden, and could I assist in persuading her? I cut him short with a clean gentlemanly thrust of my fist into his windpipe, a ploy I learned when serving overseas in the tropics, where it saved my bacon on more than one occasion. The cad collapsed upon the garden path and will not, I warrant, pester the lady for some time to come. My ears were offended by his unmanly gasping and gurgling noises, so before continuing to the front door I kicked him in the head several times.

I rapped upon the door of the bungalow with great urgency, whereupon I was ushered inside by a sloven I took to be the maidservant, Baines. Before I had the opportunity to place her head in a vice and make strangely significant passing movements of my hands in order to mesmerise her, her mistress cried weakly to me from the breakfast parlour. She insisted that I join her for a breakfast of devilled kidneys before dealing with the patient. My own preference has always been for kedgeree, bloaters, and raw liver as the first meal of the day, and indeed I had already eaten double helpings of all, and had additional portions tucked in my pockets in case of sudden peckishness, but one does not refuse a breakfast invitation from a neurasthenic lady, so I sat at the table with her and tucked my napkin under my chin.

While I waited for Baines to pile my plate high, the lady, who I was given to understand had already eaten one devilled kidney, began to rock back and forth on her chair. Her pallid face blushed crimson, her Pre-Raphaelite tresses stood stiffly on end as if she were attached to one of those newfangled electromagnetic machines, and she began to declaim incomprehensible gibberish in a grating and disturbingly masculine voice. This was no mere attack of the vapours.

I leapt up from my chair and was about to place the lady’s head in a vice and make strangely significant passing movements of my hands over her, when Baines, behind me, dropped the plate and clutched at my arm. Before I was able to berate her for the unseemly and socially reprehensible nature of her action, she gibbered something. Incapable of understanding her strangulated lower class vowels, I slapped her several times across the face, then several more times, and demanded that she speak slowly and clearly and in the best approximation she could manage of civilised human speech.

I must commend her efforts, for by listening closely I learned that in all likelihood the lady’s alarmingly unladylike plight was due to some malign tampering with the devilled kidneys, which had been prepared by a person from Porlock who was the devil incarnate and who was chained up downstairs in the basement where he had been acting as a skivvy but today had been recklessly entrusted with cooking the breakfast.

Apprised of this information, I tossed the maidservant a farthing, as one might to a performing monkey, and proceeded with élan and steely determination down to the basement to confront the fiend. The sloven had spoken the truth, for there he was, red and horned and cloven-hooved and goaty. I was about to place his head in a vice and make strangely significant passing movements of my hands over him when something quite unprecedented happened. Nothing in all my experience, not even when I was serving overseas in the tropics and witnessed all sorts of weird and mind-numbing doo-dah, was anything like this.

One moment I was taking a quick bite out of a bloater from my pocket preparatory to manoeuvring the vice into position, the next I was chained and red and horned and cloven-hooved and goaty and gazing back at… myself. I, or he, had not even swallowed the mouthful of bloater. Somehow the person from Porlock, the devil incarnate, had exchanged bodies with me, in an instant. I watched in horror as he proceeded up the stairs with élan and steely determination, bent on who knows what maleficent purpose. I rattled my chains and wept.

Thus far, I have nothing further to report. So loud does the steam hiss through the pipes in this basement kitchen that I cannot hear anything of what is transpiring upstairs. I must wait for Baines, I do not know for how long. My only solace is that the length of my chain is sufficient to allow me unhindered access to the pantry, where there are handsome supplies of kedgeree and bloaters and raw liver.

And on that cliffhanger, season one of Maud comes to a close. Season two will follow if and when the actors portraying Maud and Baines and the devil incarnate and the mesmerist and the cad manage to negotiate lucrative new contracts with the production company.