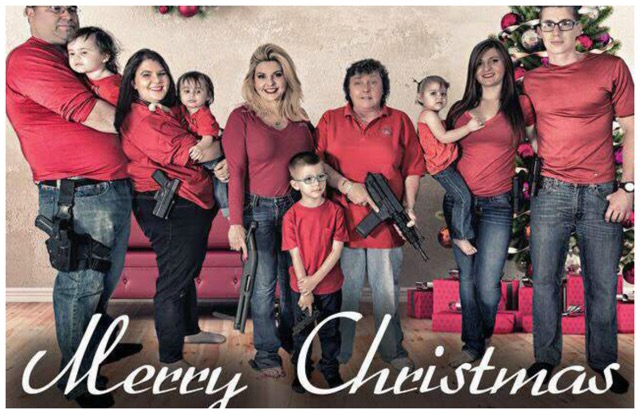 Twas the night before Christmas, when all through the land
Fear and loathing were stalking, “Merry Christmas” was banned
By those secular fiends the Politically Correct,
They hate America, what do you expect?

Assault weapons were stowed by the chimney with care
Stockings stuffed with ammunition to spare,
The children were cowering alert in their beds
While visions of terrorists danced in their heads.

Mama in her bulletproof vest and I in a fright
Kept watch for the enemy all through the night,
Mexicans, Muslims, the ACLU
The enemy is everywhere, coming for you!

Tonight we expected to greet good St. Nick
And look out for evildoers who might try to trick
By planting a pipe bomb inside Santa’s sack
Or hitching a ride on dear Rudolph’s back.

So when the sounds came of a sleigh in the air
I picked up my gun and took aim with great care.
It might be St. Nick, but how could I know
Till I saw his fat belly and heard his Ho Ho?

As the reindeer drew up on the new-fallen snow
I knew old St. Nick by his ruddy cheeks’ glow,
But from up in the bedroom there arose such a clatter
And then on the snow I saw reindeer blood spatter.

Alas, we had trained our children too well,
They thought jolly St. Nick was an agent from Hell
So they took up their weapons and blasted away
Yelling, “We are Americans, have a nice day!”

Twas a sad Christmas morning when on the TV
Came news of another mass shooting spree,
Santa and reindeer were all blown away
No toys in kids’ stockings thanks to you, NRA.

With apologies to Clement Moore

2 thoughts on “A Very Amerrycan Christmas”