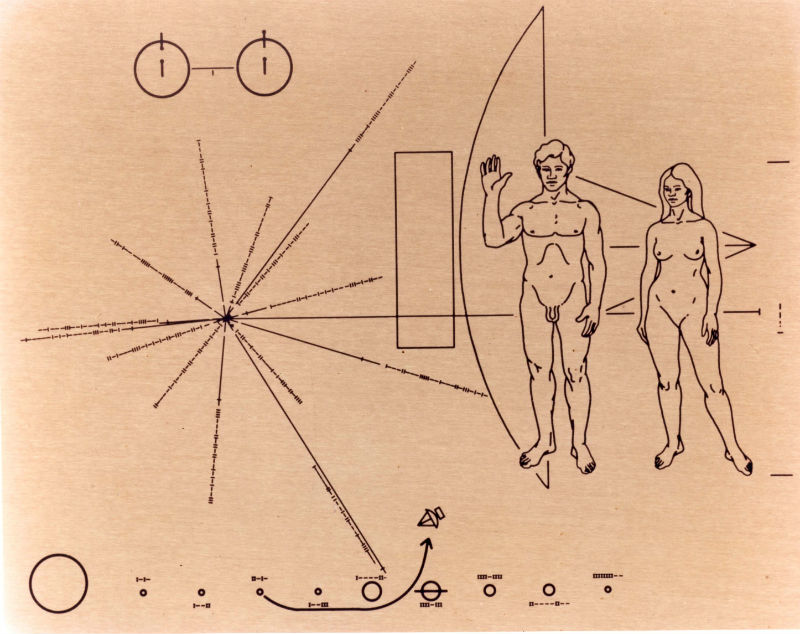 The picture above is, I’m sure you’ll agree, appallingly sexist. Whatever will the aliens think of us?…

There has been a bit of a kerfuffle in the search for extraterrestrial life. Back in 1972, the Pioneer 10 spacecraft was launched, and forty-three years later it is still zooming, beyond the solar system, hoping to bump into intelligent life. There is a plaque attached to the craft, on which, among other things, are illustrations of a man and a woman.

Now Dr Jill Stuart, an outer space expert at the LSE, has pointed out that the figures shown are hopelessly sexist and Western-centric and will give the aliens completely the wrong idea about the diverse ‘n’ vibrant nature of human life.

The best way to resolve this, I think, is to send out a new probe with a new plaque. To avoid any hoo-hah about ethnicity and diversity, I would suggest that the man and woman shown are the original Adam and Eve. Nobody could argue with that.

Fortunately, we have – in the testimony of the seventeenth century mystic Antoinette Bourignon – a vivid pen-portrait of exactly what Adam looked like:

The body of Adam was more pure, translucent, and transparent than crystal, and as light and buoyant as air. In it were vessels and streams of light, which entered and exuded through the pores. The vessels were charged with liquors of various colours of intense brilliancy and transparency. Some of these fluids were water, milk, wine, and fire. Every motion of Adam’s body produced ineffable harmonies. Every creature obeyed him, nothing could resist or injure him. He was taller than men of this time. His hair was short, curled, and approaching to black. He had a little down on his lower lip. In his stomach was a clear fluid, like water in a crystal bowl, in which tiny eggs developed themselves, like bubbles in wine, as he glowed with the ardour of Divine charity. When he strongly desired that others should unite with him in the work of praise, he deposited some of these eggs, which hatched, and from one of them emerged his consort, Eve.

Alas,  Antoinette Bourignon did not give a similarly detailed description of Eve. However, in the interests of cultural and religious diversity, the plaque could show her dressed in a burqa. Everybody’s happy!