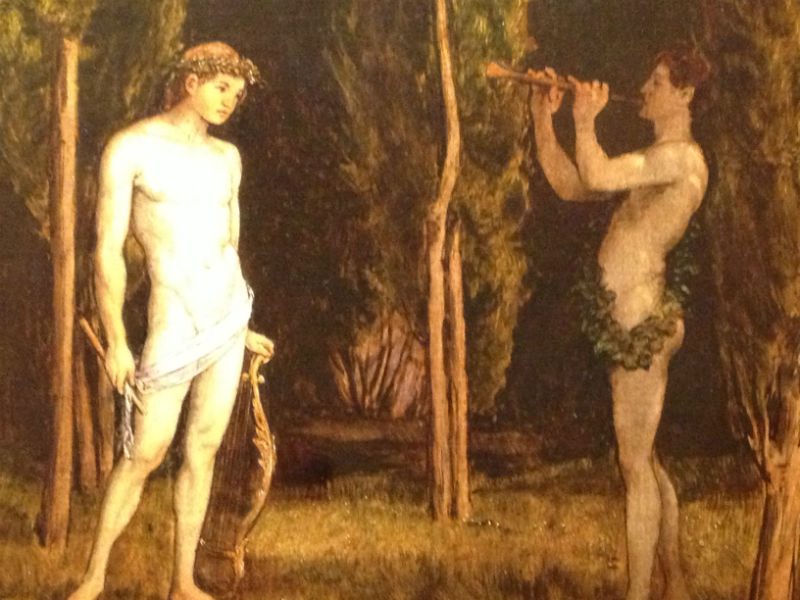 Mahlerman explores the idea that music can be a balance between order and freedom, control and intuition, between the Apollonian and the Dionysian…

What is important for the lucid ordering of the work – for its crystallisation – is that all the Dionysian elements which set the imagination of the artist in motion and make the life-sap rise must be properly subjugated before they intoxicate us, and must finally be made to submit to the law:  Apollo demands it.

Thus spake the composer of Le Sacre Du Printemps, the work that immediately springs into the mind when the words ‘music’ and ‘Dionysus’ find themselves in close proximity (along with, perhaps, the extraordinary Symphonie Fantastique by Hector Berlioz).  But in truth Igor Stravinsky, at various times in his life, produced music that was as ‘Apollonian’ as, well, Mozart’s – if we accept that Apollo was a god of elegance and grace, associated with the virtues of civilisation and polis.  But like the true contrarian that he was, in the later phases of his development, Stravinsky makes a determined attempt to exclude from his music anything in the nature of emotional expression.  His view was that music should be nothing but a logical system of ‘ordering sounds’. The beauty which is the aim of such ‘ordering’, is presumed to be free of the taint of specific emotion. The Symphony in Three Movements is a good example of this ‘style’, this point of view.

In the summer of 1927 the wealthy patroness Elizabeth Sprague Coolidge offered a commission to the composer; a ballet score for no more than six dancers which should not last more than half an hour; the subject matter would be entirely his own choice. It was Stravinsky’s good fortune that the concept of Apollon Musagete had been percolating in his mind for some time, and writing in a fever of creativity, for an orchestra of strings only, the work was ready in a matter of months. Sergei Diaghilev, who would produce and stage the ballet, visited Stravinsky in Nice whilst he was composing it, and the composer played through the first half on the piano’. Afterwards, the great impresario had this to say:

It is, of course, an amazing work, extraordinarily calm, and with greater clarity than anything he has so far done;  and filigree counterpoint, round transparent clear-cut themes, all in the major key (Apollonian); somehow music not of this world, but from somewhere above.

In this wonderful recording, the Russian violist Yuri Bashmet plays the opening Birth of Apollo, with the Moscow Soloists.

The warp and weft of these conflicting orders goes back several hundred years in music. Baroque music maintained a balance between Apollonian order and control (fugues, chaconnes), and Dionysian intuition and freedom, as expressed in, say, the encouragement performers eventually received to embellish and improvise. The use of Apollonian major keys alongside Dionysian minors became quite common until the so-called Age of Enlightenment (Apollonian) ushered in the regularity, symmetry and yes, predictability that we find so comforting in sonata form.

Most of Mozart’s piano concertos and all but two of his symphonies were all in a major key: and of the 108 symphonies written by Franz Josef Haydn, 100 were in the major mode. But joy can be found in the Dionysian exceptions, and here is a personal favourite, the almost operatic K466 Piano Concerto No 20 in D minor. It was quite common in late 18th Century Vienna for symphonies and concerti to begin with a theme, a tune; but not here. The opening is all atmosphere and gesture, with no theme to be heard, the upper strings agitated, concentrating upon rhythm at the expense of melody. The picture emerging is dark, and full of foreboding and trepidation. This is Dionysus made flesh. It is played here by the brilliantly eccentric Friedrich Gulda, now sadly gone from us.

The aforementioned Symphonie Fantastique was perhaps the Dionysian high point as the Romantic Era rolled into town. Its opus number (14) tells you that it was a product of youth, but lend your ears to just a few bars from any of the movements and it will quickly become obvious that here is a young man, Hector Berlioz, in love – with the Shakespearean actress Harriet Smithson as it turned out.  She agreed to marry the composer when he threatened suicide if she did not.  How Dionysian!  As we have heard the ominous fourth movement Marche au surplice in these pages before, here is the light-as-thistledown second movement Un bal, a few minutes of aural magic confirming, as if that were needed, that this ‘symphony’ is one of the most remarkable outbursts of genius in the history of music.  It is played by the Concertgebouw Orchestra of Amsterdam conducted by the great Berliozian, Colin Davis.

‘…a symphony should be like the world – it must contain everything’. These oft repeated words by the arch-sentimentalist Gustav Mahler sum-up the swollen, Dionysian excesses that this composer was often capable of. The early second symphony (Resurrection) of 1894 was considered (if it was considered at all) as a bit of a joke when I was in short trousers: a composer striving for effect by throwing an armada of instrumentation into the mix. 10 horns, 6 Trumpets, 2 Gongs, 3 Deep Bells etc.  There is great beauty, of course, buried away in its fastness (it is Mahler, after all) but back in grey 1950’s Britain, it all seemed a bit much. Today, if you want to fill a concert hall, you programme the Resurrection – or, the E flat major Symphony No. 8, composed in a single, staggering burst of creativity in 1906 ( ‘I saw the whole piece immediately before my eyes, and only had to write it down, as though it were being dictated to me’). Think about that, Dabblers.

Paradox, percussion and extremism – the hallmarks of the Dionysian spirit – are obvious in this Symphony of a Thousand (but 800 or so can manage it, at a pinch). In that mass are two piccolos, four flutes, at least six clarinets, four bassoons and a contrabassoon, eight horns, four trumpets, four trombones and a tuba. Those, plus a regular orchestra, are just the start. Space needs to be made for three sets of timpani, cymbals, tam-tam and triangle plus organ, harmonium, glockenspiel and piano. Two harps, celesta and mandolin need to be shoehorned in somewhere. Oh yes, I nearly forgot the singers.  Two full choirs of sopranos, altos, tenors and basses; a children’s choir; eight vocal soloists. And off-stage, four more trumpets and three trombones (seen briefly in the video below). This is not a piece for the local village hall.

A couple of weeks ago I offered a handful of Magic Moments from the musical canon, and received some interesting moments in return from a number of Dabblers. One standout moment in performance will live with me until I become worm-bait, and that was a performance of the Mahler 8th in January 1991. I don’t particularly care for this work, and the dead acoustic in the Festival Hall didn’t really fill me with eager anticipation. But I had heard the conductor Klaus Tennstedt a couple of times before and believed him to be the natural successor to Jascha Horenstein, my standout hero in romantic repertoire.

Well, the memory of that evening on the Southbank is as clear today as it was as I sat in the train taking me south. The LPO sounding like the Berlin Philharmonic;  the beanpole figure of Tennstedt on matchstick legs, seemingly just able to support his body weight (he was receiving treatment for the cancer that would soon claim him); the very broad tempi, particularly in the last section; the beautiful sound of the massed choirs, including the Boys of Eton College (Tennstedt instructed them to sing ‘like football hooligans’); but most of all the extraordinary control that the conductor exercised over these massive forces, turning the whole into what I can only describe as a transcendental experience. The words are overused, but I do not expect to see/hear his like again.

3 thoughts on “Apollo and Dionysus”