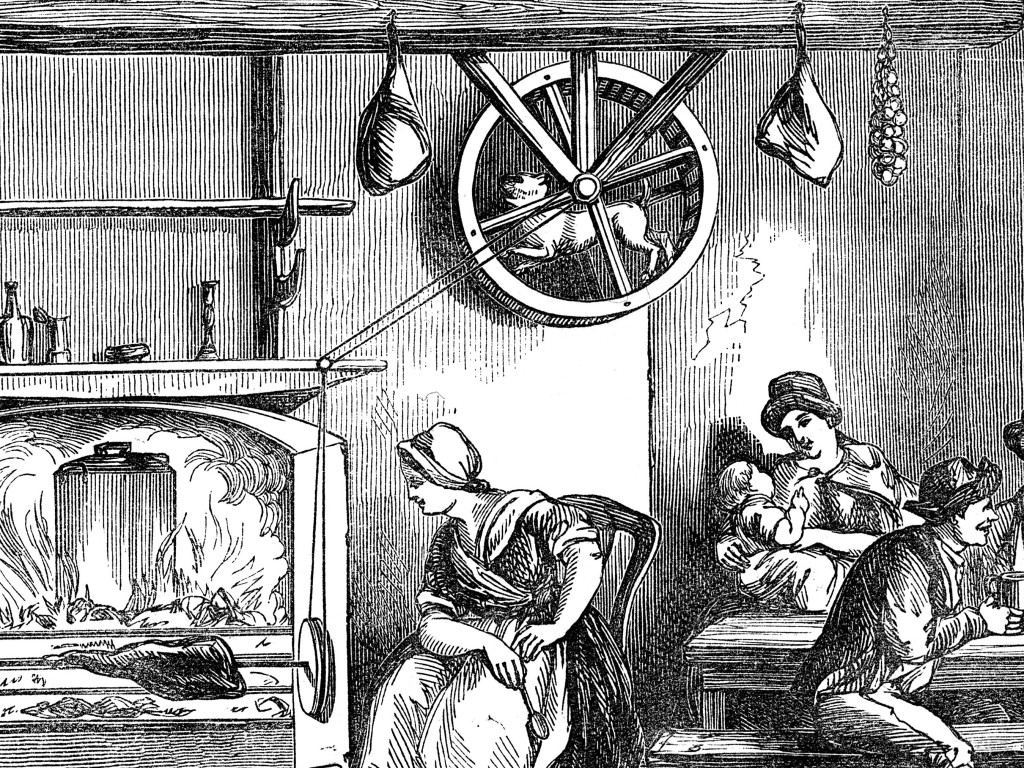 Could this be the reason why the Queen keeps Corgis? A strange forgotten dog breed in today’s weird Wikipedia article from the Dabbler’s Wikiworm…

The Turnspit Dog was a short-legged, long-bodied dog bred to run on a wheel, called a turnspit or dog wheel, in order to turn meat for cooking. The breed is now extinct. It is mentioned in Of English Dogs in 1576 under the name “Turnespete”. William Bingley’s Memoirs of British Quadrupeds (1809) also talks of a dog employed to help chefs and cooks. It is also known as the Kitchen Dog, the Cooking Dog, the Underdog and the Vernepator. In Linnaeus’s 18th century classification of dogs it is listed as Canis vertigus. The breed was lost since it was considered to be such a lowly and common dog that no record was effectively kept of it. Modern relatives, it is believed, are the Glen of Imaal Terrier and Welsh Corgi.

The Vernepator Cur was bred to run on a wheel in order to turn meat so it would cook evenly. Due to the strenuous nature of the work, a pair of dogs would often be worked in shifts. The dogs were also taken to church to serve as foot warmers. One story says that during service at a church in Bath, the Bishop of Gloucester gave a sermon and uttered the line “It was then that Ezekiel saw the wheel…”. At the mention of the word “wheel” several turnspit dogs, who had been brought to church as foot warmers, ran for the door.

Turnspits were described as “long-bodied, crooked-legged and ugly dogs, with a suspicious, unhappy look about them”. Often, they are shown with a white stripe down the center of their faces. According to Bingley’s Memoirs of British Quadrupeds (1809):

The Turnspits are remarkable for their great length of body and short and usually crooked legs. Their colour is generally a dusky grey spotted with black or entirely black with the under parts whitish.

The Turnspit is again described by H.D. Richardson in his book Dogs; Their Origin and Varieties (1847):

This dog although evidently a mongrel is nearer to the terriers than anything else and on this account I describe him among them. He is a small long backed cross made dog with the fore legs bent first inwards and then outwards he is frequently pied or glaucous coloured like the Great Danish dog and the harlequin terrier

According to John George Wood in The Illustrated Natural History (Mammalia) (1853):

Just as the invention of the spinning jenny abolished the use of distaff and wheel, which were formerly the occupants of every well-ordained English cottage, so the invention of automaton roasting-jacks has destroyed the occupation of the Turnspit Dog, and by degrees has almost annihilated its very existence. Here and there a solitary Turnspit may be seen, just as a spinning-wheel or a distaff may be seen in a few isolated cottages; but both the Dog and the implement are exceptions to the general rule, and are only worthy of notice as being curious relics of a bygone time.

…At one extremity of the spit was fastened a large circular box, or hollow wheel, something like the wire wheels which are so often appended to squirrel-cages; and in this wheel the Dog was accustomed to perform its daily task, by keeping it continually working. As the labour would be too great for a single Dog, it was usual to keep at least two animals for the purpose, and to make them relieve each other at regular intervals. The dogs were quite able to appreciate the lapse of time, and, if not relieved from their toils at the proper hour, would leap out of the wheel without orders, and force their companions to take their place, and complete their portion of the daily toil.