‘Let’s all get up and dance to a song that was a hit before your mother was born’, I suggested, and so we did, C and E and I, holding hands in a circle, to that one and Penny Lane and Baby, You’re a Rich Man. This is the sort of thing you can do on a Thursday morning when you’re self-employed. In the afternoon I went to the theatre, then after that I had a lot of drinks with an old friend who works for a fierce and bitter competitor of my ex-employer without having to worry about the awkwardness. We gossiped like Mapp and Lucia.

On my last day at the company my colleagues adorned my desk with helium balloons and I brought three home for the girls. One says ‘Sorry You’re Going’ on it and the other two say ‘Good luck’. Three weeks later the balloons are still afloat, conspiring in a corner of the ceiling.

C leapt to grab the string of Sorry You’re Leaving and we welcomed its bobbing head into our rotating circle. E did her ‘special dance’ where she holds your hands and shakes her curly mop of hair with disconcerting vigour exactly like Big Jeff. I thought about what it would look like if she and Big Jeff danced together (he’s about 6’5 including his afro and she’s 2’8 including hers) and I confess I chortled a fair bit.

‘Chortle chortle’ was the Carollian coinage much favoured by comics like the Beano to denote the mirth of schoolboys, it being a combination of ‘chuckle’ and ‘snort’ and thus the perfect expression of the schadenfreude felt by such as Roger the Dodger when he saw his enemy on the receiving end of a slipperwhacking from Dad.

As a boy I read the Beano, Dandy and Whizzer and Chips whenever they happened to come my way and unwrapped the Victor Annual on several consecutive Christmass mornings but my favourite comic by far was Roy of the Rovers – indeed, my first taste of publishing success came when I had a letter printed in the Hamish’s Hotshots page.

Roy of the Rovers mixed ‘serious’ strips (like Roy’s saga, or Goalkeeper) with overtly silly Beano-type strips like Hotshot Hamish and Mighty Mouse.  However, I drew no distinction between the ‘funny’ ones and the ‘straight’ ones  – I just read them all in deadly seriousness. Indeed, to the best of my memory, whenever I read any comics it was in a spirit of earnest study of their unfolding events – I don’t think I ever really laughed as such.

But I was fascinated by the strange way that comics suspended the laws of time and motion. Time didn’t exist in a comic frame; for example, Roy of the Rovers employed  the device of using members of the crowd to provide lengthy expository remarks while the football action was taking place. So in the split second that Roy Race unleashes his famous Rocket shot and the ball is exactly halfway to the goal, a spectator in the stands would be speechbubbled saying “Roy’s gone for goal! He’s hit it hard, but will the keeper save it?”, and his companion would reply “It’s now or never, there’s only seconds left on the clock and if this goes in Melchester will win the cup, and that could be just the thing to rescue the club from financial ruin and also save Roy’s marriage!”

Later I discovered Viz and that really did make me laugh. Not so much for the rude bits – though they are funny – but for the Beano pastiches, which prove that it is possible to be funny satirising something that wasn’t supposed to be serious in the first place. One very, very silly example I can remember was Box-Spoon Billy which I have now found online and which, with the kind permission of its author Davey Jones, I reproduce in full here: 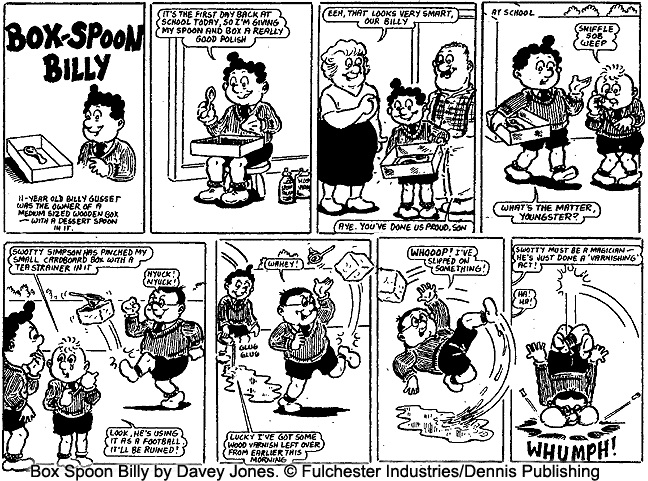 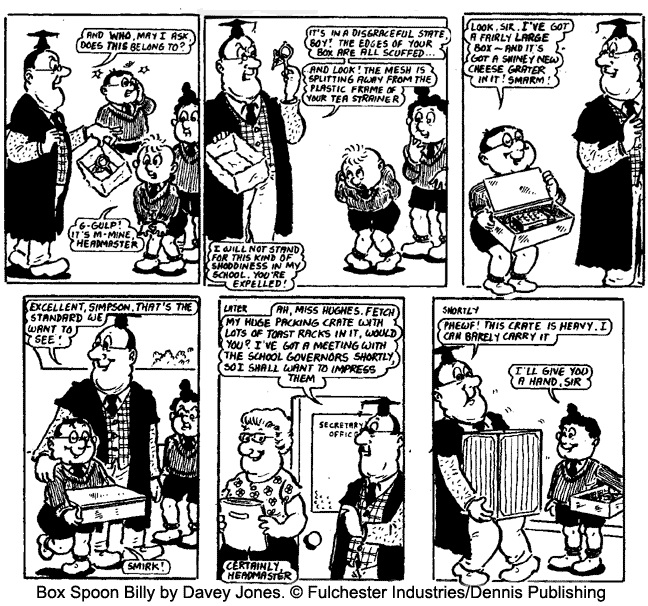 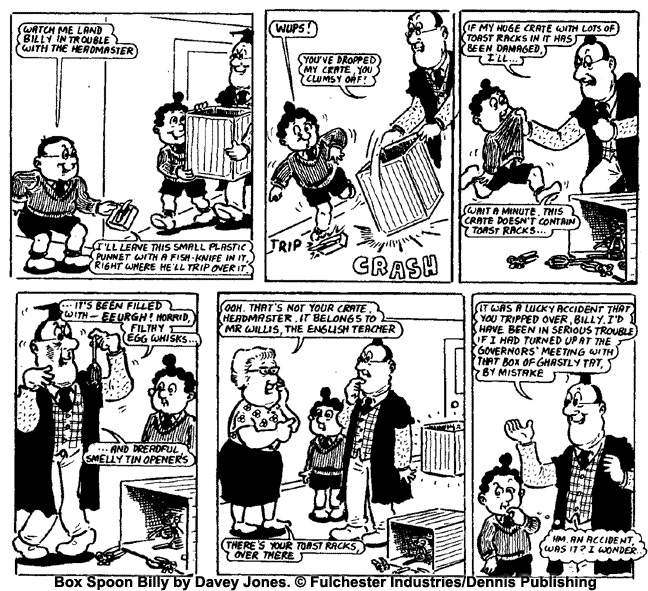 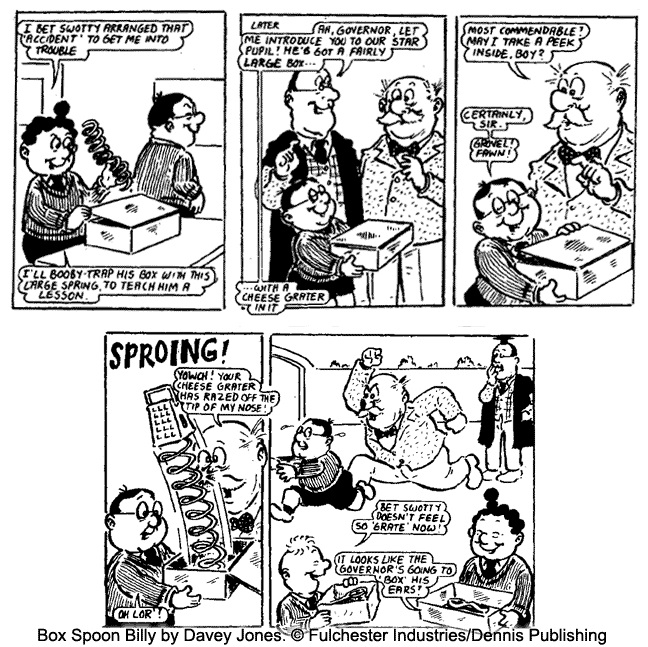 How long do the quality national newspapers have left? Doom has been predicted for a while yet they’re all still hanging on there. But what about the ‘quality’ part? Russell Brand’s piece in The Guardian in which he argues that the Chelsea fans on the Paris Metro were racist thugs because they have been alienated by all the capitalist money in football doesn’t require a fisking as it’s obvious that (1) it’s twaddle in the general  (there was far more racist thuggery before all the money gentrified the game); and (2) it’s twaddle in the particular (one of the ‘alienated’ thugs went to a £30k p.a. public school and works in finance).

The question is why such poor stuff should be published, and the answer, clearly, is that clicks are more important than quality for The Guardian. This same accusation (amongst many others) was levelled at The Telegraph by Peter Oborne in his thundering sign-off and it’s hard to argue that it isn’t happening. That should in theory leave us with The Times’ paywall model as the best safeguard for quality, but I still can’t bring myself to pay money to read news online, which I guess neatly illustrates the problem.

The play I went to see on the Thursday afternoon was Fanny Hill at the Bristol Old Vic, starring Caroline Quentin. The Old Vic, you may be aware, operates in a King Street building called the Theatre Royal which has been putting on shows since 1766 and is the oldest continually-operating theatre in the country. It underwent a major refurbishment a few years ago but, in keeping with Britain’s mania for random acts of heritage-safeguarding, they preserved some of the original 18th century seating.

So here’s my top tip for those considering going to see a play at the Old Vic: do not, under any circumstances, make the mistake that I did and give the Georgian benches in the Upper Circle a go. The Georgians may have been content to sit for three hours on a glorified plank but they were shorter, had much smaller buttocks and were considerably less spoiled than we New Elizabethans.

The girls’ mother objects when I sing ‘Though she was born a long, long time ago’ in a provoking manner and of course she wasn’t, but to our children the 1970s will be like the 1930s are to us. Yet The Beatles are emphatically not like Al Jolson. Do you realise that the side 2 running order of Magical Mystery Tour is: Hello, Goodbye; Strawberry Fields Forever; Penny Lane; Baby, You’re a Rich Man; All You Need is Love – and yet it’s not even really considered one of their best five albums?

Sometimes we need to remind ourselves of the miracle that was Lennon-McCartney – we tend take it too much for granted.