Last year I wrote a short biography of my childhood dog, Jason, and mentioned that, preposterously indulged, he had his own armchair in the front room. It was a pretty naff 1970s-coloured one left over from a previous suite, but this is what British people are like with their dogs. After a hard day’s bounding about Jason would curl up in this armchair, plop his head on an arm, let out a long sigh and gaze out the window. This daily tableau so tickled my father that he one day decided to have a crack at sketching it. The resultant picture captures the essence of  dog-on-armchairness with uncanny insight, and it remains among my favourite works in the history of western art. Here it is: 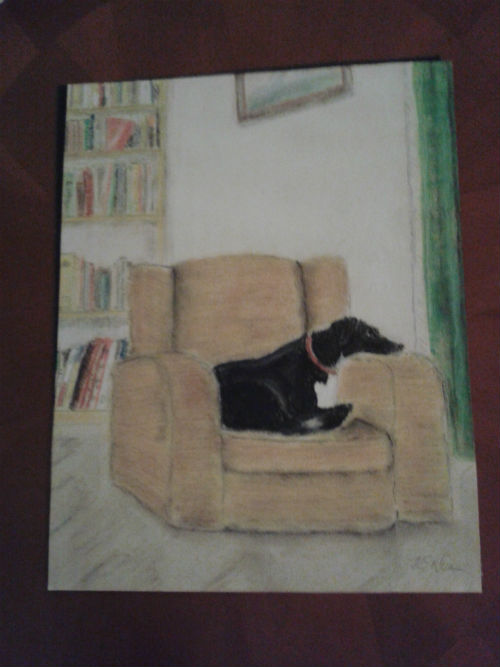 I mention this because while conducting the hard-hitting investigative journalism demanded by my role as Culture Editor for sofa.com, I discovered that there is an extraordinary quantity of art devoted to dogs in chairs, dogs on laps, and dogs generally being comfy. David Hockney published an entire book of paintings of his two daschunds sound asleep. I can only think that there is something in the human soul that derives profound satisfaction from the sight of a contented pooch in repose. Check it out!

Anyway, in the third episode we learn why the small-time con artist James McGill chose ‘Saul Goodman’ as his ambulance-chaser pseudonym… Because s’all good, man. How come I never noticed that before? Did anyone?

Worm’s alarming trove of photos rock stars at home with their parents brought with it, as Steerforth put it in the comments, a ‘Proustian whiff’ of 1970s interiors. What was that obsession with brown and orange everyone had? Yes, when I enter the memory chambers of my early childhood, they’re all just painted brown and orange.

A great many of the songs featured were disco hits, and not a single punk one. Nonetheless, narrator Zoe Ball felt duty bound to insert into proceedings the obligatory tale about how the punk movement ‘blew disco away’ and ‘changed everything’, over a vid of the Sex Pistols playing Anarchy in the UK (which made it to #38 in the chart).

(Is it me or is that conventional narrative about the importance of punk, so often told by middle-aged music journalists and critics, starting to look a bit frayed? Blondie were supposed to be a post-punk act, yet their highest-placed song in the list was Heart of Glass, a cracking disco number. Immediately after the ‘Disco Sucks’ trend supposedly killed disco, Diana Ross came out with her biggest-selling album, a disco record produced by Nile Rodgers. How groundbreaking was 1970s punk, really, compared to the Stooges and the Velvet Underground? Did punk ever produce a track as innovative as Donna Summer’s I Feel Love? If punk really did ‘change everything’ it was only temporarily. Nile Rodgers is now officially a Living Legend and much in demand. Fashionable again too are the rock ‘dinosaurs’ like Fleetwood Mac and ELO. Johnny Rotten is a slightly pitiful figure who scares nobody. Fashions shift all the time, even ones that are in the past. Could it just be that the particular group of media types for whom punk rock really was the movement that personally ‘changed everything’ is becoming less influential, and their war stories, through endless repetition and exaggeration, have become boring? My suspicion is that in every cultural movement 90% is crap, 10% is good and the narratives about social trends are hugely subjective.)

But I digress. What I wanted to mention was this video of Freda Payne singing Band of Gold. I felt compelled to watch it a number of times without knowing quite what it was that nagging at me…

Obviously there is Freda herself, who is simply awesome and comes swinging onto the stage like a supermodel. Then there are the bonkers, rhythmless dancers who could only be English. But after a while I realised it was both of these things in conjunction with the audience who, after an initial polite ripple of applause, sit in stony, motionless silence, many with the expression of serious concentration worn by men at a Soho striptease revue.

The juxtaposition of the unenthusiastic audience with the wildly enthusiastic dancers and the groovy goddess Freda lends a sort of heroic quality to their performance. I’m put in mind of the myth of the virgin youths sent by King Aegeus as a sacrifice to the Minotaur, if that doesn’t sound too mad and pretentious, which, I realise, it does, very much so.

It’s weird in this day and age to see a proper Fifth Columnist at work. Seumas Milne was born too late to be one of the Cambridge Five but he has long been the silliest figure on the anti-west left who writes regularly in a mainstream newspaper. However, this apology for Putin surely plumbs new depths, for him and for the Guardian. Imagine what Putin would do to him if he was a Russian writing similarly ‘unpatriotic’ stuff about the President… Except, we don’t really need to imagine, do we?

I’ve never really grown out of Roy of the Rovers. Even during my teenage years when I hung out with the Doc Martens and rock music gang who not only disliked sport but had an utter contempt for it, I anomalously continued to play enthusiastically for the school football team. The truth is that secretly I still look forward to my twice-weekly five-a-side games more than anything else I do. However, over my career, glory has been elusive. There was the 1989 Portsmouth Boys League triumph (I still have the trophy) but precious little silverware since. Though there was one memorable occasion when I played as a ringer for a large insurance company, scored a cracker of a goal from just outside the box and was subsequently pictured in their corporate newsletter… above the caption ‘Goalscorer: Norman Smith’.

However, that all changed the other week when as part of a scratch five-a-side team called Boca Seniors we triumphed in the Veterans Category of the Bristol round of the FA People’s Cup, a gruelling day of lung-busting, leg-cramping ultra-competitive (and in the quarter-final, against a bunch of ageing skinheads, ultra-violent) five-a-side games. There is a photo of me celebrating awkwardly on Getty images and we even made it on to BBC’s Football Focus – after seeing which I decided it was time to try the 5:2 diet before we compete in the regional semi-finals.

‘Veterans’ are over 35s and if you think that late-30s seems young to be a Vet then you’ve never tried playing football against 18 year olds. Those little bastards run fast. There is an even older category: over-55s play ‘walking football’ – viciously so, and it was consoling to think that I could potentially still be playing some form of football into my eighties. However, since all the Veterans are in the 35-45 age range, there is a worrying ten-year gap where you are  too decrepit to compete with the Vets but not old enough for the Walkers. We therefore need to invent another category for 45-55s. Trotters League?

If you noticed the site running a little slowly last week it’s because our server was creaking under the weight of traffic directed to Steerforth’s post about the Book Thieves of London, which got picked up by Digg, Reddit, The Browser, Boing Boing and others. This happens every now and again and we receive thousands of extra visitors.

By my calculation, on average approx 0.1% of them leave a comment. So once again, and I’ve said this before but it bears repeating, thank you very much to those who do take the trouble to comment on The Dabbler. Commenters are a very rare breed – but they make a blog come alive, and all comments short of outright abuse are hugely appreciated by the writers.

20 thoughts on “Dabbler Diary – I Was Norman Smith”