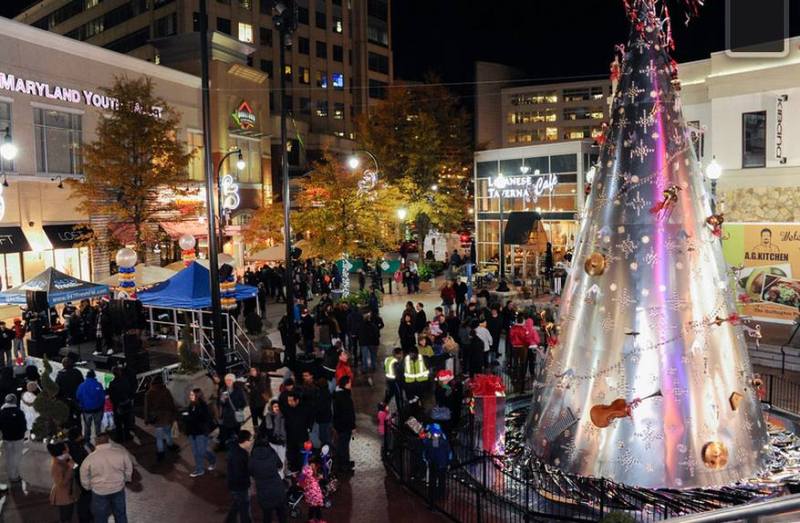 “Jingle Bells, Jingle Bells” sang the little boys in the back seat, loud and enthusiastic rather than tuneful. “Really boys,” I interrupted, “it’s not even Thanksgiving yet!” I tried to interest them in a made-up turkey song, to no avail. “Well Mom,” said my daughter accusingly from the driver’s seat, “You’re the one who suggested we go to a Christmas tree lighting celebration!” I had to acknowledge the absurdity of my position. “Gobble, Gobble,” I sang, only to be drowned out by the raucous chorus of Jingle Bells.

Never mind that it was before Thanksgiving. The boys still had uneaten Halloween candy and the squirrels hadn’t quite finished demolishing the jack o’ lanterns on the front steps, but here we were on the way to a Christmas event. Let’s blame it on the Silver Spring schedulers who unaccountably planned the lighting of the Christmas tree to take place a week before their Thanksgiving parade. At least the arrival of the polar vortex blowing arctic air into town made it feel more like December than early November. The Christmas tree wasn’t really a tree but a giant silver cone decorated with musical instruments. Children could play the instruments by pushing buttons on a computer console. A local band sang Christmas songs and my son-in-law handed out hot chocolate from his restaurant to warm chilly little hands. A good time was had by all.

Now we are back to planning for our Thanksgiving, but Christmas Creep is all around us, threatening to gobble up more and more of the fall calendar. Silver Spring wasn’t the only organization to start the season far too early. With the tedious inevitability of the sound of Jingle Bells, ranting about the War on Christmas has begun.

Every year the “evidence” for a War on Christmas ranges from wild exaggeration to outright invention. But this year our local Montgomery County School Board gave some real ammunition to the culture warriors. Responding to lobbying from the Muslim community to make Eid al-Adha a school holiday, the Board voted to remove all reference to religion from its calendar. So now the traditional days off for Christian and Jewish holidays are renamed for the seasons or just labeled “day off.” Unsurprisingly this pleased no one. The War on Christmas crowd claim that Christian holidays have been wiped from the calendar to appease Muslims. But since the Christian and Jewish holy days are still days off, whatever the name, and Muslim holy days are still regular school days, Muslims feel disrespected. The Board’s action seems mean spirited, as if to say to Muslims: “we are so determined not to let you have your religious holiday that we are even willing to pretend to cancel our own.” The Board’s explanation is that the days off for Christian and Jewish holidays are based, not on religious observance by the schools, but on expected absences on those days. School absences on Muslim holidays reflect the much smaller size of the Muslim community and do not justify school closing. But often the established narratives of the culture wars drown out rational explanations. The story was gleefully taken up by the national purveyors of resentment and paranoia.

Meanwhile back in the reality-based world Christmas the Marketing Campaign is in full swing, not even waiting for the traditional post-Thanksgiving shopping binge. In a new low for craven advertising, one department store chain renamed Thanksgiving “Thanksgetting,” urging us all to get something for ourselves to celebrate the season. They seem to have completely missed the meaning of the Thanksgiving holiday. It’s enough to make anyone snarl “Bah, humbug” and take up arms in the War on Christmas.