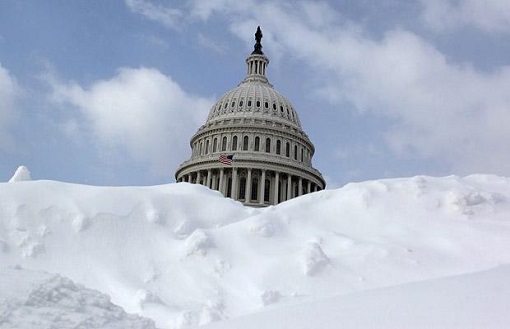 For a British ex-pat, even the weather in America is bigger and badder…

There is a new four-letter word in the vocabulary of Washingtonians: SNOW.  This winter has been remarkable for a continual onslaught of snow and ice storms and record breaking cold.  There was no respite.  Every week, even as residents shoveled the last of the latest snow from their driveways and children headed back to school, the weather forecasters triumphantly predicted the next gathering storm.  We even had to endure an ice storm while “springing” our clocks forward to Daylight Savings Time.  And now that the official date for the start of spring is past and cherry blossom bloom season is almost upon us, we are still shivering.  The children tired of sledding and building snowmen after the first couple of storms.  Often the snow was too icy and the winds too bone chilling for it to be any fun to play outside.  The thrill of another “snow day” school closing soon palled, especially for parents.  Everywhere you went people were talking about the weather.  “Snow” replaced “Obamacare” and “Putin” as the bogeyman du jour.

It used to be the English who led the world in pointless weather chat.  I am sorry to report that even in this humble arena the former colonies now have an edge.  It is with fond nostalgia that I recall the weather remarks that were the coinage of everyday conversation in my youth.  “Looks like rain,” useful at any time in England of course; “Bit nippy this morning,” one of my father’s favorite expressions; and “It’s a bloody heat wave” when the temperature rose to 70F.  Phrases as dull as damp socks, as cozy as a wooly cardigan, but useless in America.  For, as with so much else here, the weather is bigger, badder, more destructive, more death dealing, more Apocalyptic. We don’t have snow, we have Snowmageddon; we don’t have rain, we have Noah’s flood.  There is just more sky here for the weather to cavort around and build up to biblical proportions.  Entire TV channels are devoted to the excesses of the weather and every day brings new disaster headlines.  First the west endured record-setting drought, but that was soon followed by torrential rain, floods, and mudslides.  In one remarkable video the mud sliding down a mountainside in the rain was still smoking with burning ash from a drought induced forest fire.  Tornados in the mid-west, hurricanes in the south, snow and ice in the northeast, floods in the Pacific northwest, the weather has a disaster recipe for every region.  And just to keep us all off balance it sometimes unleashes surprises, like a hurricane in the northwest, ice in Atlanta, or snow in Florida.  Of course nothing is real until we see it on television, and so we found ourselves in the absurd position of watching the Weather Channel to find out exactly when the latest snowstorm would strike.  At one point I happened to glance out the window and saw for myself the first airy flurry of snowflakes drifting down.  For once reality was ahead of the TV prognosticators.

The curious thing is that with all this weather in America there is not much climate.  The phenomenon once known as Global Warming, softened to Climate Change in a useless attempt to appease deniers, is almost taboo in the mainstream media.  Suspicion of science has reached such a pitch that it is better not to mention it at all for fear of stirring a furious backlash.  But I think the religious extremists are missing a great opportunity.  They see the hand of an angry god in every tornado and the image of an unborn child in the satellite photos of Hurricane Katrina, so why can’t they see the fires of hell in Global Warming?  What could be a more fitting metaphor for the Apocalypse than the earth heating up until it bursts into flame and the sinful among us perish in the fires of hell?  After all, what god did with a flood surely he can do with fire.  The question is, who will be Global Warming’s Noah?  With a little imagination I’m sure the preachers could make science work for them.

Whether on not they take up the challenge, here in the real world winter will surely end at some point.  Then Washingtonians will be back in their comfort zone, complaining “it’s not the heat, it’s the humidity.”

3 thoughts on “Weather or Not”