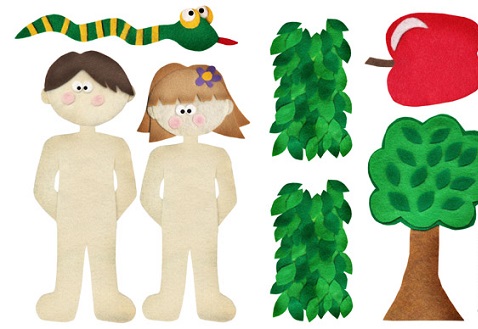 Frank makes a … well, a thing…

There is a little motor attached by wires to the balsa wood panel upon which cardboard Adam and cardboard Eve are posed. Depressing a knob on the motor switches it on and causes the panel, and thus the cardboard figures, to tremble. Their trembling is redolent of the terror they experience when the Lord informs them of their Fall.

Over on the draining board, a third cardboard figure is lying flat. It has been daubed with a blotch of crimson paint, and punctured with a toothpick. This is cardboard Abel. Cardboard Cain has been chucked into a patch of filth out in the gutter, representing the Land of Nod.

It took me two years to make my replica Eden, or Eden and Nod. It was time well spent. I am now going to use my leftover cardboard and plasticine to make a commemorative model of Nobby Stiles tackling Eusebio during the England v. Portugal 1966 World Cup tie. The sacred and the profane, both are grist to my mill.