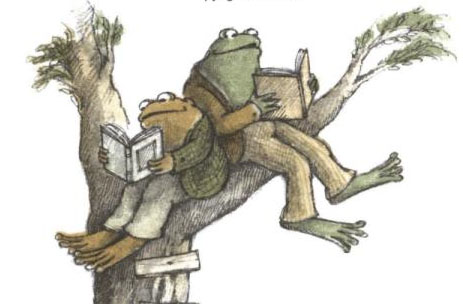 Douglas Dalrymple on one of the best things about children: their books….

One of the richer returns of parenthood is the welcome excuse to reacquaint oneself with children’s books. There are the old crowd-pleasers, of course, likeAlice in Wonderland, Peter Pan and Kipling’s Just So Stories, Dr Seuss, Curious George, Madeline, Babar and all the wonderful little books by Beatrix Potter (my daughter sleeps with a copy of Mister Jeremy Fisher every night). There are other books too, some of which you may only vaguely recall or never read as a child, but which specially impress you now that you’ve trudged a certain distance into the long fog of adulthood.

Among these I would include Russell and Lillian Hoban’s Frances stories, several of Margaret Wise Brown’s books (including Little Fur Family, The Runaway Bunny, and her Noisy books), Wanda Gág’s marvelously illustrated Millions of Cats and The Funny Thing, some of Sendak’s more obscure pieces, Edward Lear’s nonsense rhymes, Robert Louis Stevenson’s Child’s Garden of Verses, all of William Steig’s books, Arnold Lobel’s Frog and Toad, and James Marshall’sGeorge and Martha collection.

The children’s books you are happiest to read now that you’re an adult aren’t always the books your children prefer to hear, however. Steig’s child protagonists (in Sylvester and the Magic Pebble, The Amazing Bone, and Zeke Pippin, for example) are always being abducted by bandits or prepared for supper, or transformed unexpectedly into dumb boulders atop which the wolves howl hungrily through the winter snows. Which is scary stuff. And when it comes to books of poetry, they had better be illustrated. Luckily, my copy of Stevenson is chock-full of pictures, so that when I get to my favorite lines in ‘Travels’:

There I’ll come when I’m a man
With a camel caravan;
Light a fire in the gloom
Of some dusty dining room;
See the pictures on the walls,
Heroes, fights and festivals;
And in a corner find the toys
Of the old Egyptian boys,

they’re nicely matched with an ink line drawing of infant Victorians in dresses yanking the beard of Pharaoh and hugging a mummified cat. It’s sufficiently weird, anyway, for a three-year-old to puzzle over awhile as you appreciatively reread the lines.

James Marshall’s George and Martha books are as much fun for my son and daughter as they are for me, and they deserve to be more widely known. George and Martha are hippos named, curiously, after Richard Burton’s and Elizabeth Taylor’s characters in Who’s Afraid of Virginia Woolf? -only they get along much better. Each of the several George and Martha books contains five small vignettes, some of which are no longer than a couple pages. Each makes a fine little monument to the author/illustrator’s genius. My kids’ favorites include one in which George practices his fibbing, and another in which Martha attempts, with mixed results, to guilt George into giving up sweets by taking up cigar smoking herself. Marshall, it happens, was one of Maurice Sendak’s friends and was only fifty years old when he died of a brain tumor in 1992. I wish I had known his books when I was a kid.

I knew Arnold Lobel’s Frog and Toad books, however, and loved them as a child almost as much as I do now that I’m approaching fogeydom. When my kids were younger I had the opportunity to read Frog and Toad stories several times a week. My favorites include one in which Frog is ill in bed and Toad offers to keep him company and tell him a story. Frog likes the idea, but Toad can’t think of a story to tell. In an attempt to cure what sounds like a bad case of writer’s block, Toad walks back and forth on the porch, without any luck. Then he stands on his head, but still no luck. Then he pours cup after cup of cold water over his face. Finally, enraged, he rams his head into the wall. By now Frog is feeling better and Toad is feeling terrible. So they swap places and Frog asks if Toad would like a story. “Yes, Frog, if you know one,” says Toad. Frog then proceeds to tell him a funny story about someone who wanted to tell his friend a story but couldn’t think of one…

In another story, Frog gives Toad an envelope full of seeds so that he can plant a garden. Toad drops them into the soil and tells the seeds to start growing. He stands there awhile but the seeds don’t seem to be listening. He repeats himself, louder: “Now seeds, start growing!” Still nothing. This goes on until, his patience exhausted, Toad screams at the seeds and jumps up and down, commanding them to start growing. Frog comes running and explains that Toad’s seeds are probably too scared to grow and that he needs to give them time and let the rain and sun do their work. Toad feels wretched to think he might have scared his seeds, so he tries a different tack:

– He reads them stories and poems
– He sings to them
– He plays music for them
– He stays up with them night and day, which is hard work

and eventually his seeds begin to grow all on their own.  Which, it occurs to me, is a pretty good description of parenthood.

5 thoughts on “On Children’s Books”