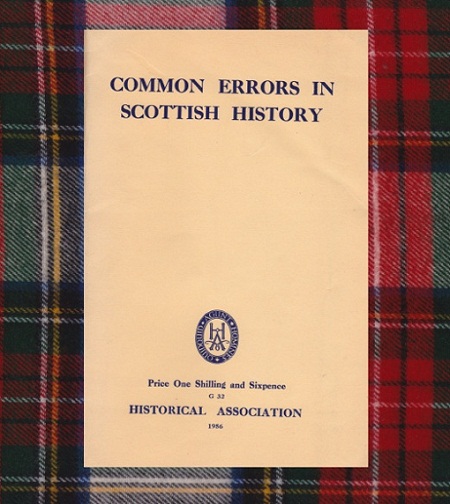 Exploring my father’s bookcase on one of my visits home, I came across a curious little pamphlet entitled 64 Common Errors in Scottish History. My father had quite an extensive library but I had never known him to be particularly interested in Scottish history, let alone conversant with its many errors.  And why, I wondered, were there so many errors about Scotland particularly? Within the covers of this intriguing pamphlet I discovered the shocking truth that there is no such thing as a clan tartan. The whole notion of associating particular tartan patterns with particular Scottish clans was an invention of the Victorians. It developed around the time that Queen Victoria and Prince Albert became obsessed with all things Scottish, spending long holidays at Balmoral and swathing everything within sight in yards of tartan. Prince Albert himself was very fond of striding through the heather wearing a kilt. Scottish family portraits going back to the seventeenth century, however, provide persuasive evidence that Scots wore whatever tartan color and pattern took their fancy. The presumed heraldic significance of tartans is nothing but a myth, the pamphlet’s author grandly concluded.

I was reminded of this common error recently when I visited a home where my host proudly showed off the “family tartan” draperies in her living room. You will be glad to know that I controlled myself and chose not to divulge the awful truth. As myths go, belief in heraldic family tartans is a pretty harmless one. But the incident did make me wonder if I had imagined the whole thing. Did such a pamphlet actually exist? So I asked my London brother, who inherited much of my father’s book collection, to search his shelves. The answer came back that he had not found any pamphlet on Scottish history but there was one entitled Common Errors in History published by the Historical Association in 1951. That at least suggested a series, so I searched the Internet and came up with a used bookshop in England selling Common Errors in Scottish History, Historical Association, 1956. Perhaps the number 64 I remembered wasn’t part of the title but enumerated within. Since this was the closest I could come to my memory I purchased it. The wonders of modern technology, that we can browse bookshops across the world! My pamphlet arrived and I knew at once it could not be the same one. There was no mention of the number 64, in fact it contained only a paltry 18 errors, and the cover was cream, not the dark green I remembered. But it did confirm that clan tartans are a myth, albeit without mention of the role of Victoria and Albert, a detail I clearly remember from the original.

Homes and persons decorated with clan tartans, heraldic crests, and other badges of lineage are not uncommon in America. For all their staunch republicanism (in the Roman sense) Americans are touchingly enamored of the trappings of Old World aristocracy. Genealogy is big business and the Internet is crowded with companies offering to search for your family Coat of Arms, print it on genuine antique looking parchment, or even design one from scratch. Upscale boutiques offer gift items from mugs to key chains to framed affidavits of authenticity emblazoned with your Family Crest. Notwithstanding the fact that most of the nineteenth and early twentieth century immigrants to America were fleeing poverty and persecution, few Americans claim descent from the European peasantry. There is a Prince or a Lord on every family tree if you go back far enough. One branch of my husband’s family, farmers all, claims descent from Lord Nelson.

I saw the obsession with genealogy up close during my years in the public library where people often expected to find historical records. In fact in past years the public library just carried general how-to genealogy books as well as compendiums of heraldry and, of course, tartans. We often referred people to the local County Historical Society library where the passenger lists of immigrant ships arriving in America are available along with local history sources. Once the Internet came to the library it was easier to help the genealogically inclined with the wealth of online resources available. People often shared their discoveries with the librarians, proud of their research skills and family history. Some claims were dubious though. One woman researching her Irish origins excitedly told me about visiting the grave of Jane Eyre in Ireland. Fortunately this revelation left me speechless. 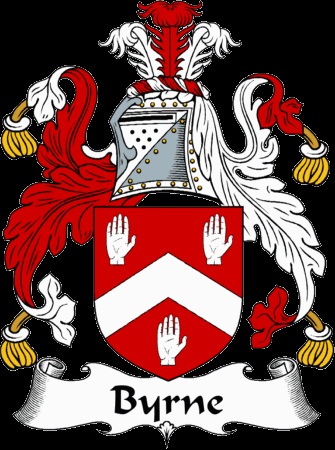 It is a measure of just how Americanized I have become that I too have embraced the purported Family Crest of the Byrnes. At least to the extent of hanging it on my keychain – not too pretentious. Oh but then there are the coasters casually scattered in the living room. It’s not as obvious as tartan curtains, but still. I know my younger, English, solidly socialist self would be appalled. At least I’m not the only one. A young American-born member of the Byrne clan has the Family Crest tattooed on his arm. He shall remain nameless to protect his privacy, though I think he actually posted a photo of it on Facebook. I imagine my Irish grandparents being quite mystified by this behavior. As to a clan tartan, the Irish have very few associated with family names. Perhaps because Victoria and Albert showed no enthusiasm for the Irish. If I had to choose a tartan for the Byrnes it would be one I came across in a book about an extraordinary archaeological find, The Mummies of Uramchi by Elizabeth Wayland Barber, an expert on ancient textiles. In the Uyghur region of western China perfectly preserved mummies were found dating to as long as 4,000 years ago. They were Caucasian, very tall with reddish blonde hair. The clothing they wore was also perfectly preserved, beautiful woven tartans. These ancient people had left their Celtic homelands to wander far along the Silk Road to the east, just as the modern Byrnes have wandered far to the west.

Now clan tartans have been exposed as a myth, perhaps hidden away on some obscure bookshelf is a little pamphlet entitled Common Errors in Irish History, which would reveal our Family Crest to be a myth too. If you know of one, or have a lead on the elusive 64 Common Errors in Scottish History, please let me know.

11 thoughts on “The Tartan Myth Exposed”