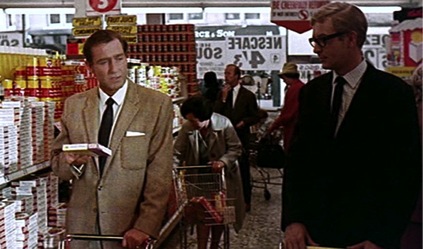 Harry Palmer:  It’s not just the label sir, these do have better flavour.

Colonel Ross (with sarcasm):  Of course, you’re quite the gourmet, aren’t you Palmer?

I want you to go back in time if you will, to the mid 1960’s. To the years when olive oil, famously, could only be tracked down at the local chemist, and Crêpes Suzette was a dish of mystery, savoured by the likes of the Fab Four, and those lucky diners who could afford to splash out at the more desirable restaurants; where, at your table, a fawning waiter in a maroon coloured monkey jacket would flambé a steak au poivre. 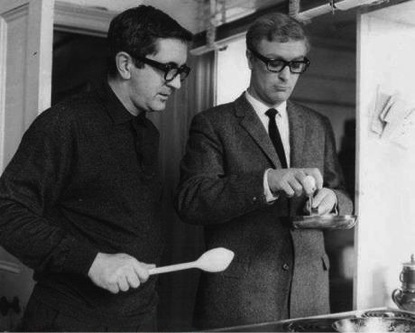 Into this culinary desert, strides an egg whisk bearing Harry Palmer, the working class protagonist in Len Deighton’s thriller, The Ipcress File, first published in 1962. Palmer is the perfect anti-hero: vice-versa, a flawed Mister Bond. While Bond holds Her Majesty’s commission in the Senior Service, Palmer scrapes the rank of Sergeant in the Intelligence Corps. Bond wears a Walther PPK, Harry Palmer wears National Health Specs. And if fussy old Bond requires his housekeeper to boil the speckled brown egg of a Maran hen for three and a half minutes precisely, Harry Palmer is far more likely to slip Mozart’s Prague on the trusty record player and whip up an armagnac soufflé.

Len Deighton was- is- a man of many talents. He studied at Saint Martin’s before winning a scholarship to the Royal College of Art. Ou Est Le Garlic? (his first cookery book, based on his weekly cookery strip for The Observer) was published in 1965. His column and books appealed to the simplistic and mechanical brains of men: technical, cartoon-like manuals on the fine art of French and Italian Cuisine. Wannabe sophisticates learnt how to order from an A La Carte Menu (the correct pro-nunc-iation spelt out phonetically), how to stuff a Chou with Tomates, how to deglaze a copper pan, prepare Caneton à l’Orange, cut a cigar correctly (paper band on or off?) and order eel from a fancy fishmonger. 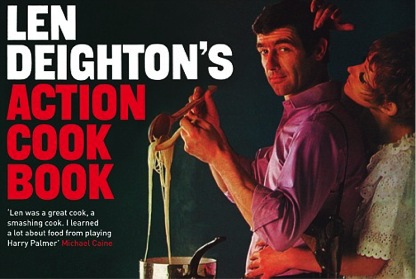 “You’re not the tearaway you think you are”, smoulders sexy Sue Lloyd during the kitchen scene in The Ipcress File, “You also like books…music…cooking.”

“I like birds best”, says Harry- an unsubtle reminder to a Sixties audience that although Sergeant Palmer appreciates the finer things in life, he reassuringly bats for the home side. At the time, Michael Caine’s character must have seemed remarkably novel, a prototypical yuppy before that depressing acronym had been invented, making it quite clear that it was okay for Real Men to cook, and quite possibly not just okay, but a desirable aid in persuading that voluptuous girl in the office (the one you’d had your eye on for several weeks) to enjoy the delights of your home cooked Rôti de Porc aux Navets, and to climb in between your shiny black nylon sheets after the event.

International Men of Mystery please take note: The Action Cook Book is still available, albeit via the sinister Kindle. The art of seduction aside, it’s a brilliantly entertaining introduction to decent food, and in our Brave New World of Marks & Spencer microwaved mushroom risotto, this can be no bad thing. Even if Harry Palmer buys tinned Indian Prawn Curry from the supermarket.

You can find more of Luke Honey’s take on cuisine over at his excellent blog The Greasy Spoon, and also at his writings on the antiques business at www.lukehoney.co.uk