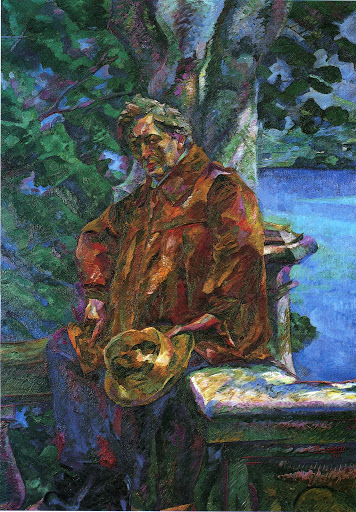 As well as being a remarkably innovative composer, Ferruccio Busoni was a writer, arranger, editor, painter, linguist and intellectual. Was he, in fact, the last Renaissance Man?…

When the itinerant clarinettist Ferdinando Busoni’s wife Anna Weiss became pregnant in 1865, it was a measure of the instability and recklessness of his character that he decided the middle names of the boy (why would it be anything else?) that arrived on Easter Morning, All Fool’s Day the following year would be Dante Michelangelo Benvenuto.  It was a heavy burden to carry through life but, as quickly became obvious, the child Ferruccio Busoni was soon to become an artist of quite exceptional talent, and a pianist and composer of genius.  At the age of nine, he was already being spoken of as the ‘next Mozart’.  Instead, he became the first Ferruccio Busoni.

A further link to Mozart (revered by Busoni above all other composers) was the continuing baleful influence of Busoni’s father on his blossoming career.  The young Mozart was hawked around Europe by his father Leopold when the child’s genius became clear, but there is scant evidence to support the notion held by some scholars that the old boy’s possessive and mendacious attitude toward Wolfgang concealed a plan to enrich the family as the boy matured.  However, the relentless pressure that Ferdinando brought down upon his son (hours of daily keyboard practice) was, unashamedly, an insurance policy to keep himself in comfort as his dotage loomed.  Amazingly, instead of rejecting these strictures, the young Busoni embraced them, along with the now-complete control of his education that his father had assumed.  Curiously, in matters musical, it was not the Italian masters that the old ruffian taught; it was Bach, Handel, Beethoven, Schumann and other Germans, an emphasis that Busoni cherished lifelong, and after further study made the boy into an Italian (Romantic) who thought like a German (Classicist).

In 1886 the twenty year old had become a handsome young man and, after further study in Graz, was living in the artistic hotbed of Leipzig, meeting Grieg, Mahler and Tchaikovsky.  Teaching appointments followed in Helsinki and Moscow, by which time he had married the woman with whom he would spend the rest of his life, Gerda Sjostrand, daughter of a Swedish sculptor.  By 1890, after a troubled period in America, he returned to Europe and settled with Gerda in a flat in Berlin, and began the works for which he is best known today – the ‘adaptations’ of JS Bach’s Inventions, Preludes and Fugues.  Here is Nun komm der Heiden Heil (BWV 62) from 1898, first appearing in Weimar in 1714 under Bach’s hand.  The pianist is the Russian-American wizard Vladimir Horowitz, his barnstorming days behind him, playing in his own apartment, his magical touch still in good order.  The smile at the end says more than any words can.

I first became aware of Busoni in the 60’s when the late John Ogdon recorded the elephantine five-movement Piano Concerto, not just making light of the staggering technical difficulties but somehow getting to the obscure heart of the piece.  Spanning about an hour and a quarter with a male chorus dropped into the last movement, this really is the maddest concerto of all, in a crowded field.  Busoni began composing it when he was 16; along the way he contemplated writing music for the Danish poet Oehlenschlager’s play Aladdin; this he dovetailed into the choral finale.  The opus 39 was completed 20 years later when the composer was in his late 30’s, and it stands (admittedly in the shadows) as perhaps the ultimate expression of the late romantic concerto.  Yes it is, as the great Alfred Brendel has said ‘monstrously overwritten’  but sometimes it is wonderful to sink into chocolate.  Here, from the All’ Italiana fourth part, the cascading fountains and Neapolitan songs of Italy are released in the crazy climax of the movement.

On a balmy evening in 1986 I was drifting rather aimlessly down Saint Martin’s Lane in London, intending to catch my train from Charing Cross back home from work.  Outside the English National Opera building there was the usual scrum of people drinking and talking, and waiting for the five minute call to ‘curtain up’.  I couldn’t see which ‘opera’ was about to be performed, but I would often ‘drop in’ if it was obscure, or even unknown to me.  It was just how I had acquainted myself with Aribert Reimann’s ‘Lear’ (a long evening) and Stephen Sondheim’s rather wonderful ‘Pacific Overtures’, bumping into ‘Steve’ at the interval.  When I staggered out three hours later I had seen a vast Gothic montage containing an orchestral introduction, a spoken introduction, two prologues, an intermezzo, and three scenes.  I had seen Tom Allen in the title part of Doktor Faust by Ferruccio Busoni.  There were no tunes that I could remember (let alone hum), and the overwhelming feeling I took away was of pessimism – but – I was absolutely entranced by the musical drama, the shifting, moody orchestral score, weaving its way in and out of the Faust story.  The composer intended the opera as his masterpiece, and it surely is; unfinished at his death in 1924, he had been working on it for 30 years.  A young student of the composer completed the last few pages.  The size, scope and ambition of this amazing piece are simply too great for the compressed format of The Dabbler – but perhaps this gloomy, majestic orchestral Sarabande, will give dabblers an idea of the unique soundworld of this masterwork.

In 1911, a few months before his death, Gustav Mahler conducted the first performance of Busoni’s Berceuse Elegique in New York.  Originally conceived as a piano solo in 1909, the composer orchestrated it in the same year.  It was dedicated to Busoni’s mother, and is perhaps one of his finest works.  The thoroughly disturbing painting is ‘Death and Girl’ by Egon Schiele, a suitable backdrop for one of the bleakest pieces of music that I know.

So, who was Ferruccio Busoni?  Was he the last Renaissance Man that his father hoped he would be?  He was a composer – but was he a first class second-rate composer?  He was incontestably one of the greatest pianists of his age or any other.  He was a writer, and aesthetician, an arranger and an editor.  He was a painter; he mastered every European language, and had a library of thousands of books, had read them all and, what is more, could quote from any part of any one of them.   But, more than any other quality, he was an intellectual and a man of ideas – and second-rate or not, his music sounds like nothing else.  He believed that the words of his countryman Leon Battista Alberti ‘a man can do all things if he will’, fitted him like a glove – and they did.

To end, the simple beauty of Busoni’s greatest ‘adaptation’, played by one of the masterful Italian pianists of the last century, Arturo Benedetti Michelangeli. He is playing the last part of the JS Bach D minor Chaconne BWV 1004 at a public concert. There are those that find Michelangeli’s perfect technique and unmatched touch disturbing.  I do not number myself among them.