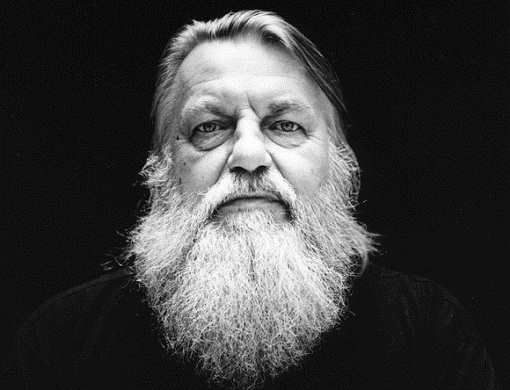 When two of Frank’s heroes collide, great art is made…

I was a teenage Samuel Beckett fan. I owed my early enthusiasm to my English teacher, Richard Shone, who taught me between the ages of thirteen and eighteen, through my O and A Levels. He encouraged me to read widely outside the syllabus of set books, introducing me to Tristram Shandy and Franz Kafka among much else. But it is difficult to calculate the effect on my young brain occasioned by the fact that one of the first serious novels I ever read was Beckett’s Watt. I still consider it to be probably the funniest book ever written. And that was the thing with Mr Shone. Himself greatly appreciating the comedy in a writer still too often seen as bleak and miserable, he was eager for me to share that appreciation. After Watt, I devoured the Molloy / Malone Dies / The Unnamable trilogy – and all before my sixteenth birthday.

My other great hero at the time, in another field, was Robert Wyatt. I was introduced to him by my older brother, who brought home the early Soft Machine LPs and the pair of records by Wyatt’s successor band Matching Mole. What I loved about Wyatt was that, unlike seemingly everyone else in those days, he sang in a defiantly English accent. Also, at a time when hairy prog rock persons were caterwauling about pixies and elves and unicorns, Wyatt’s lyrics were more like snatches of conversation, prose rather than poetry. On the second Soft Machine album, for example, the entire text of the song “Hullo Der” is as follows: “If I were black and I lived here, I’d want to be a big man in the FBI or the CIA. But as I’m not and of course I don’t, and as I’m free, white and twenty-one, I don’t need more power than I’ve got except for sometimes when I’m broke”.

My twin infatuations came from wholly different worlds, and resonated with me in different ways. But then, in 1975, they somehow collided, gloriously. Wyatt’s solo album from that year, Ruth Is Stranger Than Richard, included the song “Muddy Mouth”. Accompanied by Fred Frith on piano, Wyatt sings an aching, plaintive song about a man in a bleak Beckettian landscape, masturbating in an outside toilet (or possibly an actual, rather than a euphemistic, bog). The whole mood of the piece, the combination of sadness and squalor and mordant humour, seemed to me then, as it does now, the closest anything in “rock” music has got to the spirit of Samuel Beckett.

Here are the words:

Deep in the undergrows, Handy sighed with relief. He’d come alone in the dark, he’d come again at dawn, if not before the morning cock rise. Meanwhile in the bushes above, behind the towpath which goes along beside the canal leading to the sea, which in turn leads on to all the major oceans, Indian, Atlantic, Pacific, I can’t remember the names of the others off-Handy-cided to leave. He’d come apart at the seams, endangered life and lawn order before, the more since he lies. Even under oaf, Handy lies, when he feels caught between right-hand wrong. I think he just might have been wrong this time, which in turn left him with few alternatives to relieving himself by hand, alone in the dark, hiding in the bog.

Listen, and enthuse. (The clip begins with a brief prefatory piece.):