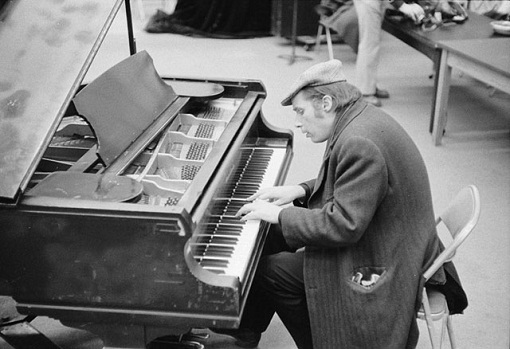 From the Dabbler archives, some rather odd pianists…

The evidence would suggest that piano virtuosity and wild eccentricity go hand-in-hand. Here are three of the most troubled Greats (and this is not even to mention David Helfgott, made famous by the movie Shine, or Grigory Sokolov, who takes each piano apart before playing it and makes notes of his observations in a book).

Sviatoslav Richter (1915-1997)
One of the 20th Century’s supreme virtuosos, the Russian played at Stalin’s funeral but preferred to give impromptu free concerts at tiny, remote towns. He claimed that his repertoire ran “to around eighty different programs, not counting chamber works” and at a wedding he once played the entire first act of Madame Butterfly from memory for a small group of guests. This prodigious memory was also a curse: a ‘”terrifying, nonselective memory”. He could recall the name of every person he ever met and if one escaped him he lost sleep over it. He was tormented by a droning melody in his head, which he eventually identified as a version of Rachmaninoff’s ”Vocalise”, heard in childhood. At one troubled period in his life he insisted on having in his possession, at all times, a plastic pink lobster. More here.

John Ogdon (1937-1989)
A sadder case, this. Regarded as perhaps the greatest British pianist as well as a prolific composer, Ogdon was a gentle giant. He won the prestigious Moscow Tchaikovsky Competition in 1962 with performances of Rachmaninov and Scriabin, as well as the Tchaikovsky 1st Piano Concerto which became his signature piece, but he also had a keen appetite for new, experimental music. He gave the first performance in 50 years of Kaikhosru Sorabji’s four hour epic, Opus Clavicembalisticum, and then offered to repeat the entire piece as an encore. But his life was blighted by chronic depression and mental illness (never fully diagnosed but probably schizophrenia) which led to three suicide attempts: one, gruesomely, by cutting his own throat. He spent long periods in Maudsley Hospital, London, undergoing lithium treatment and electroshock therapy, yet he died at the age of 52 of natural causes connected with undiagnosed diabetes. More here and here.

Glenn Gould (1932 – 1982)
One of the most notoriously eccentric (to put it mildly) of all pianists, the Canadian called himself ‘The Last Puritan’ and once said that “Mozart was a bad composer who died too late rather than too early”. When playing he usually accompanied himself with odd humming (to the immense irritation of many, especially sound engineers during recordings), made strange physical movements and at concerts always insisted on sitting, on a knackered old chair made by his father, precisely 14 inches above the floor. He was obsessive about the cold, wearing heavy clothes even in warm climates, which once led to him being arrested for vagrancy when sitting thus attired on a park bench in Florida. He hated touching other humans, generally refusing handshakes, and such was his hypochondria that when an employee of Steinway Hall tapped him on the back he wore a body cast for a month and threatened to sue the company. He died at the age of 50, after suffering a stroke. More here.

This post originally appeared on The Dabbler in August 2010.