Today we recall a Christian who threw himself to the lions.

It is a very terrible thing to be “framed up” and cruelly punished when one is entirely innocent. … I always call mine a clerical Dreyfus case. Still, I feel sure things will eventually right themselves, for “though the Mills of God grind slowly, they grind exceeding sure[sic]”.

Harold Davidson, in a letter to Lady Weigall, 1st January 1937

In 1937 the former Rector of Stiffkey, Harold Davidson, was killed by a lion called Freddie. 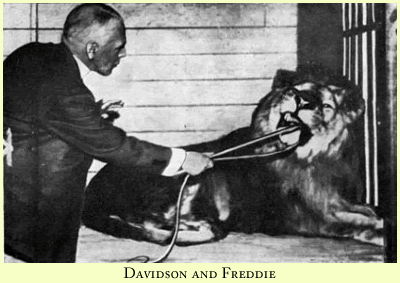 The defrocked and disgraced prelate had been appearing in an entertainment in Skegness as Daniel in the Lion’s Den, with Freddie and a lioness called Toto. He would stand in the cage with the somnolent lions and give a little talk to the onlookers about the various injustices which he (Davidson, not Daniel) had suffered, for about ten minutes. On this particular occasion, he tripped on Toto’s tail and Freddie, startled to action, mauled the old man fatally about the neck.

It was not Davidson’s first dismemberment. Five years previously, following his conviction in Consistory Court on various counts of immorality, the Rector had been defrocked in a ceremony in Norwich Cathedral. Ironically it was the emergence of a photograph of Davidson posing with a literally defrocked would-be actress (and daughter of a friend) called Estelle Douglas which finally put the mockers on his defence. 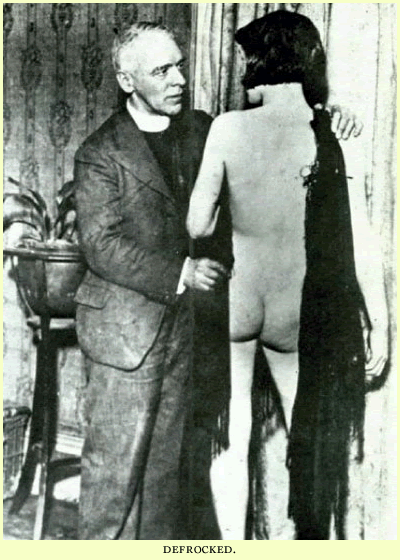 I do not know whether he was present at the ceremony, which can be perfectly well conducted in absentia and unlike cashiering (I find, to my disappointment) does not involve an actual disrobing. It is merely a reading of the judgement of the appropriate authority framed by some prayers and hymns.

Nevertheless, the end of priesthood is a symbolical disrobing of the priest. A priest is a priest by dint of the clothes he (or she) wears. The analogies of enrobing run deep in the spiritual mind. What was the incarnated Christ, after all, if not a spirit-being dressed up in the weeds of humanity? Creation itself was an adornment of matter: twelfth century philosophers, building with gay abandon on some hints of St. Augustine, had developed the complex theory of exornation which explained how creation had taken place in two stages – first the summoning of inform matter (chaos); then the ornamentation of that matter (cosmos = cosmetics).

Of course this was supposed to be a logical, and not a dramatic, distinction; creation stories – whether of the adorning or finger-pointing variety – are for minds less rigorous. Nevertheless, the controlling metaphor both of creation and incarnation was one of investiture. The invisible was made visible by being clothed; a sheet was thrown over the ghost.

And then summarily whipped off again, if you were the Rector of Stiffkey. In the years following his disinvestiture, plain old Harold starred in various threadbare entertainments in Blackpool and Skegness, more or less as himself. To begin with he made appearances fasting in a barrel, a Diogenes of forbearance. Extraordinarily, and inexplicably to us, he drew crowds so vast a public order injunction had to be brought against the impresario of the show. 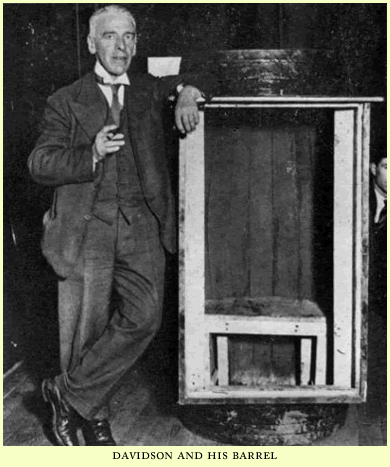 After that he developed his act to include a tableau vivant of himself in an oven, being prodded with a pitchfork by a sidekick dressed as a devil. And finally he stepped into the lions’ den, with tragicomic consequences.

It seems that the Rector of Stiffkey used to be proverbial. I had not heard of him until I visited Blakeney a few weeks ago, and passed through the village of Stiffkey. My source on that trip, a friend called Timothy Feakins whose powers of recall are admittedly variable, assures me that as late as the 1950s he (the Rector, not Feakins) was sometimes dragged out in double-page spreads in The Express as a paragon of moral turpitude. Davidson’s descendants have subsequently made efforts to show that he was the victim of persecution, originating in local grudges and village suspicions and subsequently amplified by the ponderous investigative machinery of the church and the reverberations of the gutter press.

Like a confused old Lear, however, the extent of his culpability is no longer of central interest. There remains to us only the carnivalesque spectacle of a man fragmenting: the uncloaked priest was no more than a shocking tittle of bit-parts and rumours, self-justification and self-abasement, so that it is difficult to see where persecuted Daniel ends and cigar-smoking Harold begins. Unaccommodated man, we might reflect, is no more but such a poor bare forked animal as Harold Davidson was (“off you lendings! Come, unbutton here [tearing off his clothes]”). 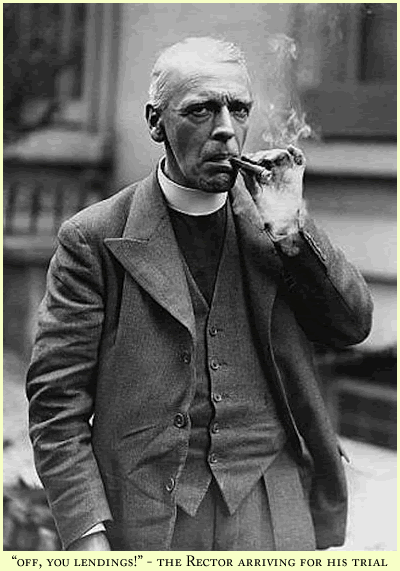 11 thoughts on “The Rector of Stiffkey, unclothed.”