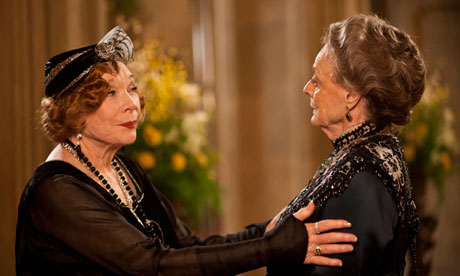 Posh British soap Downton Abbey is a worldwide television phenomenon, but could the introduction of the ‘vulgar’ American character Martha kill the US’s love affair with the show…?

As dawn broke over Washington D.C. on Monday January 7th area residents were divided into two camps.  No, not Democrats and Republicans this time, not conservatives and liberals, but those who couldn’t stop talking about the last Redskins game on Sunday afternoon and those who couldn’t stop talking about the first episode of Downton Abbey (Season 3) on Sunday evening.  Washington’s football team, the beleaguered Redskins, who had shown signs of a revival of fortune, lost in the first game of the play-offs and are out for the rest of the season.  The heartbreaking circumstance was the injury of the star quarterback, a god-like young man known mysteriously as RGIII, believed by fans to possess magical powers.  As he limped from the field with a ruined knee, the controversy began over whether the coach could have saved him, and the game, by pulling him out at the first sign of injury and giving his substitute a chance.  The fact that I am so well informed about this should not be taken to indicate that I have any interest whatever in the sport.  But you cannot live in the Washington area and escape hearing far more than you ever wished to know about the ongoing drama of the Redskins.  It is a saga with as many heroes and villains, tragedies and triumphs, scandals and sub-plots as any television series, though perhaps lacking in the costume department.

But on this morning I was firmly in the Downton Abbey camp.  The series is a bona fide television phenomenon in the United States, with this Sunday’s season premiere garnering 7.9 million viewers, one of the highest audiences ever for PBS (the Public Broadcasting Service).  Just why Americans are so fascinated by the lives of British aristocrats and their servants a century ago is open to interpretation, and there is no shortage of interpreters.  Nostalgia for monarchy, identification with a time of rapid social change, the irresistible draw of a soap opera in fancy dress?  Whatever the reason, Downton Abbey has become a national obsession.  Everywhere I went on Monday morning friends, family, and strangers were discussing Season 3’s first episode.  Yes Lady Mary’s wedding dress did dazzle and the Earl of Grantham facing his personal fiscal cliff resonated.  But what was most interesting about these conversations was that they all ended up focusing on the depiction of Martha Levinson, the Countess of Grantham’s American mother, played by Shirley MacLaine.  Her addition to the cast had been eagerly anticipated as a clash between two legendary acting divas.  Would MacLaine be able to match Maggie Smith quip for quip?  The expectation was no.  But few would have predicted that the American character would be played as such a stereotype that the “special relationship” heretofore enjoyed by British TV dramas and the American viewing public is endangered.

These are some of the comments about Martha Levinson I heard or received in emails:

“A complete stereotype of the ugly, rich American.”
“Her make-up was clownish. Americans as clowns.”
“Over the top, even more so than the British family.”
“She had some very telling comments but she wasn’t allowed to be funny.”
“The Dowager Countess was crisp and funny. Martha seemed annoying.”
“All her lines were trademark American lines for every situation.”
“She had bad manners.”
“A vulgar woman. Is that what they think of Americans?”

I must admit I felt much the same as these critics.  I thought her dress was flashy as compared to the restrained good taste of the Crawleys.  Like something Mrs. Patmore, the cook, would wear if she suddenly came into money and was trying too hard.  I was particularly appalled by her table manners.  She was shown hunched over her plate chowing down while the Crawleys feigned decorous disinterest and picked at their food.  Even the servants commented on her greedy eating.  But is there a grain of truth in this picture?  Americans really do eat more.  I remember being shocked when I was first served a steak dinner in an American home.  The piece of meat on my plate was bigger than the Sunday roast my mother cooked for our family of six!  Martha Levinson also exhibited the American habit of using her fork as a shovel, which does look crude to British eyes.  Americans, on the other hand, find British eating habits funny. I once saw an American friend reduced to fits of barely repressed laughter as he watched a woman in a London restaurant carefully slice her peas in half and balance the pieces precariously on the underside of her fork to convey them to her mouth.  An American using the shovel method would have eaten the lot before she had managed two or three.

But along with her flashy ways and bad manners Martha also embodied the positive side of the American character.  Impatient with tradition and formality, she swept through the stifled rooms of Downton Abbey like a burst of fresh air.  When the Crawley’s made a ridiculous fuss over whether everyone had the appropriate jackets to wear for dinner, Martha unstuffed their stuffed shirts with cheerful American pragmatism.  She turned a crisis over a broken stove into a jolly good time, which even seemed to bring a smile to the Dowager Countess’s usually disapproving features.  This side of Martha’s character was not mentioned as often by those I heard from on Monday.  Perhaps it is taken for granted by Americans.  But it resonated with me as an ex-pat.  On my first visit home after several years in America I remember being aware of a smothering atmosphere I can best sum up as: “We’ve always done it this way so we’ll keep on doing it this way forever.  You are what you were born to be until the end of time.”  I had tasted the heady American freedom to reinvent yourself over and over, to take or leave traditions or to create your own.  Once you breathe this air it is very hard to go back.

It remains to be seen whether Americans’ bruised egos will forgive the creators of Downton Abbey for the Martha stereotype.  Will they continue their love affair with the British aristocracy?  Will the Countess of Grantham’s saintliness in the face of financial ruin make up for her mother’s failure to save the day with her boatloads of American cash?  What did British viewers think of the American visitor I wonder?  Perhaps the Dabblers can weigh in on this matter of crucial importance for British-American relations.

I’ll let my daughter have the last word.  When she heard a complaint about the depiction of Martha she responded: “But that’s what the British do think of Americans.”  I have to wonder just where she got that impression.

26 thoughts on “An American at Downton”