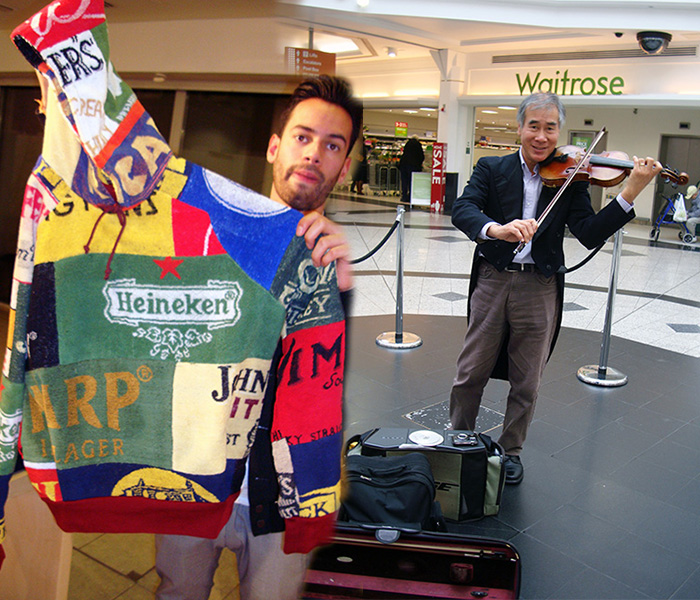 Susan Muncey is our trendspotter-about-town, and this week she’s dealing with soup, soap, and a “cornucopia of hair, teeth and beards” at a Harvey Nicks launch party…

Sometimes, the things designed to make our lives easier have completely the opposite effect. Take my new food processor – the mini Magimix, designed to fit the modern, streamlined kitchen: I think the instructions must have been translated from French – and the demonstration photographs taken by someone with absolutely no knowledge of kitchen gadgetry.  I tried out each attachment in turn, in an attempt to find out how it worked. Then, inspired by Jamie Oliver’s book, 15 Minute Meals (most of which look as though they’d take at least an hour and fifteen minutes to prepare), I decided to make some soup. However, I didn’t think I needed a recipe, as soup is easy peasy. No?

…No. I pulped three leeks, which seemed to take an age, and involved removing big chunks that the mixer simply refused to blend. Then I added a large onion to the machine, which was reduced to mush with alarming speed and efficiency.  Finally, I placed my soup ingredients into a saucepan with a pack of liquid vegetable stock and proceeded to heat. After ten minutes or so, I thought I’d sample my concoction, only to discover it tasted like boiled wheatgrass. The addition of a tub of crème fraiche, along with some nutmeg, lemon juice, honey and black pepper made little impact on soup’s overwhelming bitterness.  It was also so thick that it took me another ten minutes to wash the gloopy mulch down the sink.  And it stank.

Talking of which, it really irritates me when expensive soap cracks, or breaks in half after only a few uses. Yes, I know it’s petty to concern oneself with such things, but is there a scientific reason why bars of soap seem to disintegrate in the shower, yet not in the bath? I guess this is why someone invented shower gel.

By the way, has anyone else given up drinking for January? I lasted for 10 days, but on the 11th, had to succumb. A friend, whose on-off love affair with alcohol has included a stay at The Priory, kindly sent me an article by TV’s alien-looking Dr Christian Jessen, proclaiming that a month’s abstinence could do more harm than good.  I was easily convinced.

Almost everywhere I went last week, the champagne flowed… and, reluctantly, I declined. I recorded the first episode of Mr Selfridge in order to attend a party at Harvey Nichols on the launch night of London Collections: Men (men’s fashion week). I’m not sure why it was decided to hold a major fashion event at the beginning of the first working week of the year, but I suppose we have to start somewhere. Anyway, I ended up chatting to Harvey Nichols’ Group Stores Director – mainly because he and his partner were among the few guests who looked to be over 30. The room was a veritable cornucopia of hair, teeth and beards (expertly-trimmed facial topiary being curiously popular amongst the youthful fashion crowd). I also managed to snuggle up to male supermodel, David Gandy, for a photo – and, later in the week, enjoyed afternoon tea at Spencer House, courtesy of Woolmark and the tailors of Savile Row. And, you’ll be pleased to hear that the next big thing in men’s fashion, designed by Martine Rose, is the recycled bar towel hoodie (see above left).

Closer to home, I was curious to find out more about the busker who plays outside Waitrose in the Putney Exchange Centre. The smiling violinist, called Kai, wears a tailcoat (above right) and entertains shoppers as they queue at the checkout with his renditions of Elgar’s Chanson de Nuit and Boccherini’s Minuet (the one from the Ladykillers). He’s not exactly note perfect – and, in a way, that’s part of his charm. Kai says he busks in a number of locations – it’s his job, but it doesn’t feel like one because he loves playing so much. He’s invited me to perform a duet with him, though I’m not sure I’ll take up his offer unless I can find a particularly good disguise.

Isn’t it funny how we can walk around for years without noticing what’s around us, and then suddenly register something for the first time. On my perambulations around Putney, I spotted an inauspicious little side street by Putney Builders’ Merchants. It’s hidden away beside a railway bridge, and you’d never know it was there… which made me wonder why on earth it’s called Grand Parade Mews. Oh, and just opposite is a café and deli called Valentina, which serves simple Italian food that’s actually rather good. What’s more, this month, if you book online, they’re offering a 50% discount. I expect they do an excellent soup of the day too.