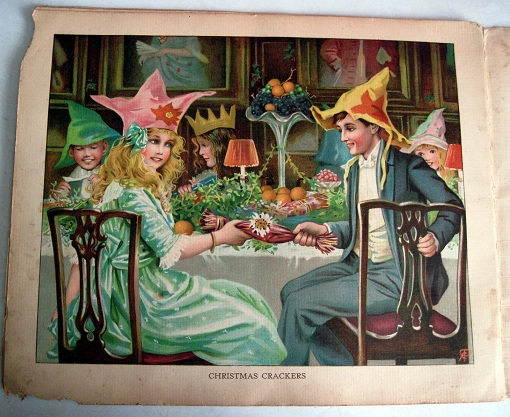 Exiled in the US, Rita attempts to import an English Christmas…

We don’t have Boxing Day in America, but it’s probably just a matter of time before we adopt it as we have so many other English Christmas customs over the years I’ve lived here.  Christmas was a rather sad time during my early years in America.  I missed my family, and California with its December sunshine and mild temperatures just didn’t feel Christmassy enough.  I felt nostalgic for the Christmas traditions of my English past, even those I found ridiculous at the time.  Where were the tacky paper streamers festooning the living room, the flaming plum pudding, the mince pies, and most of all the Christmas crackers with their silly hats and corny jokes?

Things improved when we moved to Maryland.  The weather was more suitable and we even had a few white Christmases.  When we had children, establishing family traditions from both our cultures became important.  My mother began sending me Christmas crackers through the post, by slow sea mail in those days, and they often arrived crushed but still cracking.  My children’s friends were fascinated but sometimes scared by the explosive pops, and underwhelmed by the little plastic trinkets inside.  My husband took over the role my father had always played: being the one member of the family to stubbornly insist on wearing his paper hat all day despite constant ridicule.  My mother came over to visit one Christmas and managed to smuggle a plum pudding through customs hidden among her underwear.  We speculated wildly on what her fate might have been if she had been apprehended at the airport.  “British woman caught with contraband pudding,” the headlines might read; “Christmas spirit no excuse” judge rules.

Another year we got some real headlines.  English Christmas customs were foreign enough in America at the time that our family was featured in the local newspaper.  A reporter encountered me at the library and, hearing my accent, asked to interview me for a series on Christmas customs around the world.  She came to our house and took a photo of my children self-consciously pulling a Christmas cracker, giving them a brief burst of fame in the community.  But gradually English Christmas products began to appear in American stores.  Our local grocery chain began stocking Crosse and Blackwell brand Christmas puddings and brandy butter so we didn’t have to rely on my mother’s smuggling abilities any more.

I had a bit of a disaster with the Christmas pudding one year, terrorizing a neighborhood child.  First I should explain that I have an unfortunate history of pyrotechnical disasters at my social events.  I set the lawn on fire with torches intended to repel mosquitos at a barbecue.  I lit a Roman Candle on my son’s birthday cake thinking it was a sparkler.  The firework exploded all over the room, the cake was inedible, our kitchen table still bears the scars, but fortunately no one was hurt.  I had another close call just this last Thanksgiving when I almost set my sister-in-law’s hair on fire with my seasonal arrangement of candles shaped like pine cones and gourds.  Turns out it is not a good idea to put candles on a woven basket plate.  It caught fire when the smallest candle burnt down.  No one noticed the conflagration on the cabinet behind my sister-in-law until she began to feel uncomfortably hot!  On that long-ago Christmas when my son was about six, his best friend came over to play just as I was about to serve the pudding.  He stood at the dining table, his eyes just reaching table level.  In the kitchen I poured brandy over the pudding and set it alight.  But as I carried it in triumph into the dining room it was obvious I had used far too much brandy.  The flames began licking over the edge of the plate burning my fingers.  As I tried to juggle my fingers underneath the plate I lost control and the pudding flew from my hands landing on the table, still in flames, right in front of our little visitor.  He turned and ran, arriving home breathless and announcing to his startled parents, “Their dessert is on fire!”

In recent years even Christmas crackers have made an appearance in American stores.  At first it was just a few specialty shops, but this year I was surprised to see them at Target, one of our big chain stores.  I added a box to my shopping cart glad that this would save me another errand.  As I was going through checkout the girl suddenly told me she needed to scan my drivers’ license.  I was taken aback.  I had never been asked that in a store before.  Seeing my confusion she explained, “Because you’re buying firecrackers.”  I started to laugh.  “I’m sorry,” she said, “but the computer won’t let me do anything else now until I’ve scanned it.”  When my husband heard the story he teased that I’m now probably on some Homeland Security watch list of people who buy explosives.

The incident was amusing until the school shooting on Friday December 14th when I reflected that I would have faced less scrutiny had I bought a gun instead of a box of Christmas crackers.