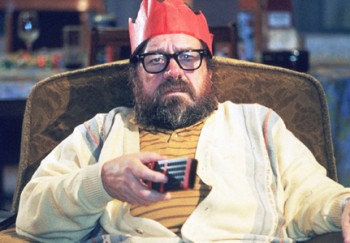 As is now a Dabbler tradition, here’s Brit’s Christmas poem…

Christmas, like revenge or copulation,
Is mostly fun in the anticipation.
It’s weeks, it’s days, and now it’s here, it’s here!
And now it’s gone, in a haze of port and beer,
And leaves you wondering where the hell it went.
Children learn this lesson in Advent,
Or should do, or else what is Advent for?
To prise open each tiny cardboard door
And find this surprise: the trick is not to cheat,
But to let tomorrow’s star or chocolate treat
Come in its time, and surely Time will claw
Its agonising way to Twenty Four.
Or Mum will say “You really are the worst,
You’ve only scoffed the whole lot on the First!”
And Dad will say “Son, to delay such feasts
Is what separates us humans from the beasts.”

But come Christmas Day, Dad’s bestial enough,
Postprandial and, just like his turkey, stuffed.
Immobile as a slumbering manger ox
and mumbling that there’s nothing on the box,
(Except repeats of good old Tommy Cooper,
Just peeping through the brandy butter stupor,
And Morecambe and Wise – that one with André Previn)
Until half-awake at twenty-five to seven,
His head humming with Jingle Bells and Slade,
He’ll dimly total up the price he’s paid
In cash and flab and stress and indigestion,
Then dimmer still, the philosophic question:
How come every year it seems to me
That Christmas isn’t what it used to be?
And if it’s every year, should I infer
That Christmases were never what they were?

And then he’ll root around the plastic tree,
Scavenging for scraps of childish glee,
And finding none, he’ll conjure up at last,
That great parade of Ghosts of Christmas Past,
The Great-Grandmas and Grandmas and Grandads,
Their grins and gins, and ‘when-I-were-a-lad’s,
And carol-singing schoolmates in their dozens,
And lonely aunts, and plain annoying cousins,
Who, all on separate currents, drift apart,
With all that love and loss, to break your heart.
It all came in its time, and Time claws past
Each long-awaited Christmas ’til your last.
But did those ghosts believe it, every one,
That this is really it now, this is fun?
Or were they all just waiting, and then it went.
We should have learnt that lesson in Advent.

So we’ll shovel snow from the graves of our relations,
But there are no graves – these days it’s all cremations,
And there is no snow – English Christmases aren’t white.
So instead let’s drink, and bid a Silent Night
To the days when only laughs and presents mattered,
And to family and friends and ashes: scattered.

One thought on “Ghosts of Christmas”