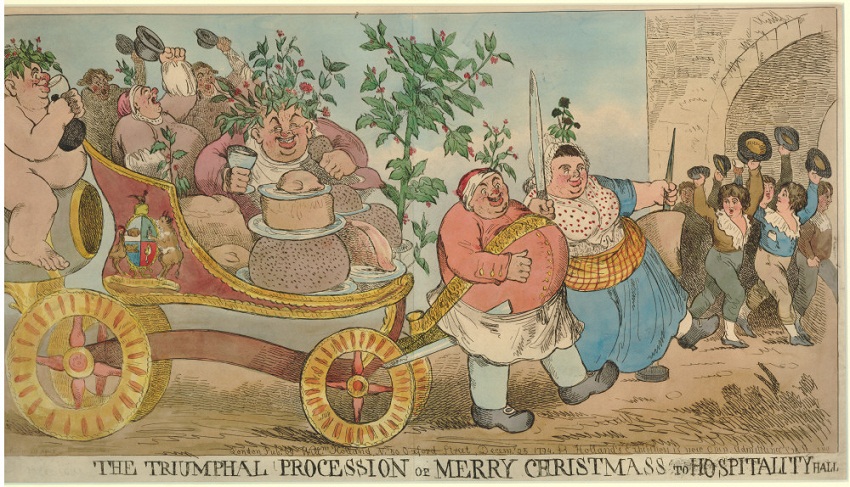 After reading this post, singing about a partridge in a pear tree will never be quite the same again…

So they do sing.  Santa Slang tends to see things a little differently. This may stem from the cynical loudmouth’s consumption of all those seasonal measures of the patent digester, the o-be-joyful and the brimming glass of mahatma, not to mention the 88 kindred terms for the French cream (noted by Captain Grose as that liquorous additive ‘so called by the old tabbies and dowagers when they drink their tea’); it may be — the old boy’s stock-in-trade being what it invariably is — an irrepressible need  to foul even Yuletide’s nest. Either way, this is slang: we make our own rules, or at least our alternative definitions. So gather round, my dears, douse the telly, cage the tinies and unwrap another page of samples from Mr Slang’s Fictionary: where the words, if not the world, turn upside down.

bird: a prisoner and a sentence; an obscene gesture made by raising the middle finger from the otherwise clenched fist; such a bird is both given and got. As cocaine it weighs a pound and like the tree, it is something the weak-minded can be out of.

calling: to call is to beg, to blame, to challenge and to vomit (thus onomatopoeia’s call Buick, call Charles, Hughie, Herb and Ralph). Alternative renditions have colley, which in slang is marijuana; thus collie-man, a marijuana salesman

dancing: having sexual intercourse; usu. in phr. e.g. dance to the shaking of the sheets, dance to the reels of Bogie; to be hanged, thus phr. dance upon nothing in a hempen cravat, dance the Newgate hornpipe, dance at Beilby’s ball where the sheriff plays the fiddlers

drummer: a travelling salesman; a thief who specializes in robbing houses while their occupants are out, usually for a short time; the laziest and therefore the slowest shearer in a shed.

drumming: posing as a door-to-door salesman to tour houses and thus identify empty ones, ripe for robbery. The drum-arsed are possessed of large buttocks.

geese: to inject a narcotic drug; as sing. goose, a sucker, a scolding, a Jew, a poke into the genital area with a finger or some form of implement; in rhyming slang an act of sexual intercourse.

hen: a woman, variously middle-aged, unkempt or promiscuous; a gay man; a quart pot; in compounds hen-hussy, a man seen as overly concerned with domestic affairs; hen fruit, eggs; to spin a hen is to dance with an older woman

lady: a female hunchback; a queen in a pack of playing cards; an effeminate homosexual; cocaine; candidates for Debrett include Lady Blamey, a drinking vessel made of half a beer bottle with the cut edge rounded by sandpaper; Lady Green, a prison chaplain and Lady Godiva, a five-pound note.

laying: having sexual intercourse; as noun lay: a criminal occupation, the act of lying down and smoking opium; as verb to watch for, to knock unconscious, in phr. lay up in lavender, to pawn, to hide from the police, to imprison and to die

leaping: under the influence of drugs or alcohol ; having sexual intercourse; in phr. leap at a daisy, to be hanged; leaping dandruff, head lice; leap and you will receive, a ritual challenge to a fight

lord: a hunchback; from the upper house, Lord Harry, a mild oath; Lord Lovel, a shovel, Lord Mansfield’s teeth, the row of spikes embedded into the top of the wall of the King’s Bench prison and Lord Northumberland’s arms, a black eye.

maid: the word does not exist in slang although rhyming slang offers the synonymous plastic surgeon and maiden lane was a red-light area and maiden sessions one at which no-one was sentenced to death.

pear: as a verb, to supply officers with information about a robbery and then warn the thieves to get away and as such a play on peach; pear-making was enrolling in a regiment, taking the offered bounty and then deserting; the process can be repeated several times (one makes an appearance).

ring: being circular the ring represents the vagina, anus and mouth; to ring a peal in a man’s ears is for a wife to upbraid him; to ring is to substitute, typically a car or horse; thus ring the changes, to defraud or deceive, esp. by passing counterfeit money or substituting a worse article for a better one.

swan: slang is kind to swans, equating their water-bound stateliness with gradual progress and the term swan about, to wander. A swan lake is not danced but eaten, being rhyming slang for cake.

swimming: if a fish is a prisoner then to swim is to fit into prison routine; to make someone swim for it is to cheat an accomplice out of their share of the proceeds and to swim in golden lard (or grease) is to be offered and accept a multiplicity of bribes

tree:  the tree is the gallows and can be triple, three corner or the bearer of fruit all year round as well as being the deadly nevergreen, leafless or turning, both as in ‘turn off’ and the twisting corpse. Any multi-coloured pill is a Christmas tree; so too is a home-made jagged-edged prison knife.

turtle-dove: a lover, which produces go turtles over, to fall in love (or lust) with. It rhymes with love (and works as a verb and as turtle-dovism) but also glove, especially that worn by a housebreaker to hide fingerprints.

PS. The Twelve Days come in various national versions. I am loathe to bow to stereotypes, but could this list come from anywhere but gastro-heaven, South-West France, where the song is entitled ‘La Foi de la loi’: ‘a good stuffing without bones, two breasts of veal, three joints of beef, four pigs’ trotters, five legs of mutton, six partridges with cabbage, seven spitted rabbits, eight plates of salad, nine dishes for a chapter of canons, ten full casks, eleven beautiful full-breasted maidens, and twelve musketeers with their swords.’ Though, oddly, no geese.

2 thoughts on “The 12 Days of Christmas Slang”