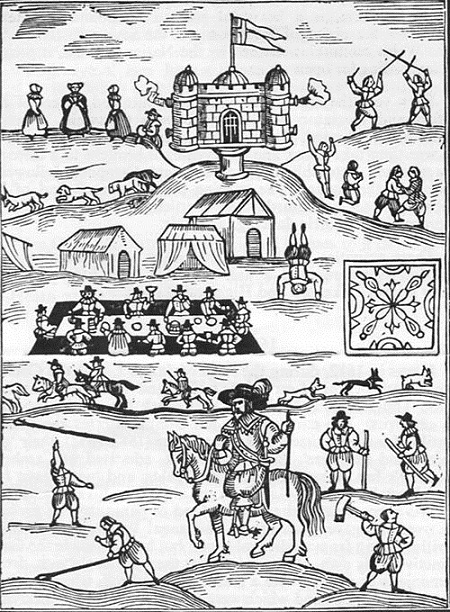 Britain’s triumphant Olympic year is drawing to an end – but will it still be remembered in 400 years? And is it time to reinstate the noble sport of dwile flonking in time for Rio?..

Few realise that the first Olympic revival took place not in the 19th century, but exactly 400 years ago, in 1612, near Chipping Camden in the Cotswolds. They were staged, with royal approval, by one Robert Dover, a lawyer, author and wit, for motives which remained unclear to him. As he recalled,

‘I cannot tell what planet ruled, when I
First undertook this mirth, this jollity,
Nor can I give account to you at all,
How this conceit into my brain did fall.
Or how I durst assemble, call together
Such multitudes of people as come hither.’

Events in the Cotswold Olimpicks included, as well as a bit of running and jumping, horse-racing, coursing with hounds, dancing, sledgehammer throwing and fighting with swords, cudgels and quarterstaffs. For the more sedentary, there were games of chess and cards (for small stakes), and food and drink galore. Cannon were fired from a temporary wooden structure known as Dover Castle to signal the start of events, and much fun was had by all.

Naturally, the games fell out of favour as the Puritans made their presence increasingly felt, and they were suspended altogether for the duration of the Civil War and Commonwealth. Revived at the Restoration, they gradually declined into a drunken rout, before being stopped altogether in 1852. But that was not the end of the story: the games were staged again for the Festival of Britain, and have been held every year since 1966, though in a somewhat different form from Dover’s original games.

Events now include tug-of-war, shin-kicking, gymkhana, piano smashing and, of course, dwile flonking  – for an explanation of which, Wikipedia cannot be bettered:

The pastime of dwile flonking (also dwyle flunking) involves two teams, each taking a turn to dance around the other while attempting to avoid a beer-soaked dwile (cloth) thrown by the non-dancing team…

According to the Friends Of The Lewes Arms, “The rules of the game are impenetrable and the result is always contested.”

A ‘dull witted person’ is chosen as the referee or ‘jobanowl’ and the two teams decide who flonks first by tossing a sugar beet. The game begins when the jobanowl shouts “Here y’go t’gither!”

The non-flonking team joins hands and dances in a circle around a member of the flonking team, a practice known as ‘girting’. The flonker dips his dwile-tipped ‘driveller’ (a pole 2–3 ft long and made from hazel or yew) into a bucket of beer, then spins around in the opposite direction to the girters and flonks his dwile at them.

If the dwile misses completely it is known as a ‘swadger’ or a ‘swage’. When this happens the flonker must drink the contents of an ale-filled ‘gazunder’ (chamber pot (‘goes-under’ the bed)) before the wet dwile has passed from hand to hand along the line of now non-girting girters chanting the ceremonial mantra of “pot pot pot”.

A full game comprises four ‘snurds’, each snurd being one team taking a turn at girting. The jobanowl adds interest and difficulty to the game by randomly switching the direction of rotation, and will levy drinking penalties on any player found not taking the game seriously enough.

Points are awarded as follows:

At the end of the game, the team with the most number of points wins, and will be awarded a ceremonial pewter gazunder.