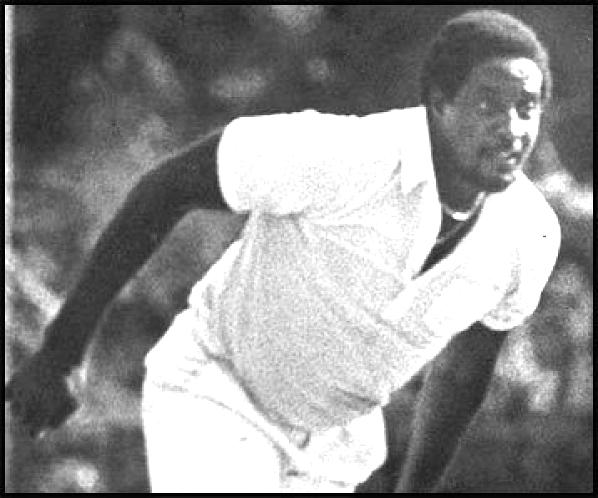 The name of Sylvester Clarke is receding now, but during the first half of the 1980s in his years at Surrey it hung over county cricket in the same way that Sonny Liston’s had hung over boxing: star-crossed, whispered, feared…

Steve Waugh could feel the will of his Somerset team-mates “disintegrating” a full week before it happened. By the time the players were getting changed for the game, “half of them were out already”. When Waugh himself went to the crease he faced “the most awkward and nastiest spell” of his career.

He described the experience as “something you can’t prepare for. It’s an assault both physically and mentally and the moment you weaken and think about what might happen, you’re either out or injured…”

Waugh was hardly alone. Viv Richards said that Sylvester Theophilis Clarke was the only bowler that he ever felt “uncomfortable” facing. Graham Gooch had his helmet split down the middle. Zaheer Abbass was struck so hard that his lid had an indentation as deep as half of the ball. David Gower had the padding and thumbguard ripped from his hand, along with most of his thumbnail – they ended up “near third slip”. Simon Hughes, hit on the head by the third ball he ever faced from Clarke, wrote from the blessed safety of retirement that he had been left “two millimetres of man-made fibre from death”.

The name of Sylvester Clarke is receding now, but during the first half of the 1980s in his years at Surrey it hung over county cricket in the same way that Sonny Liston’s had hung over boxing: star-crossed, whispered, feared… His first class figures – 942 wickets at 19.52 – suggest an outstanding talent; his eleven Tests – 42 wickets at 27.85 – hint at a man born out of time. Yet the numbers are like the list of Sonny Liston’s knock-outs: a simple frame on which to drape the myth.

Whether he was the quickest of his time is a moot point. Geoffrey Boycott, who faced them all, thought that Thomson and Holding at their peak were the fastest. What set Sylvester Clarke apart were two things. The first was his attitude at the crease. He was in a way unknowable; wordless, dead-eyed. All that was clear of his personality was the way he bowled – with bad intentions. Once, challenged by an umpire for repeatedly pitching short, he turned around and said: “it ain’t no ladies game…” The second was that his pace was accompanied by steepling bounce, and worse than that, an action that made it unpredictable.

From a short, slow-ish run his natural line was towards the batsman. Dennis Amiss, who made a double hundred against Michael Holding and Andy Roberts at the Oval in 1976, called it “the trapdoor ball”, because it was hard to pick up and then it just kept zoning inwards at the throat. Any batsman will tell you that the worst kind of bouncer is the one that follows you. Sylvester’s could be like a heat-seeking missile.

Superficially it seems as though he might have been a legend (or at least a different kind of legend) had he not been born at a time of astonishing abundance in West Indies fast bowling, but that was not his fate. Like Sonny, he appears to have been an outsider. On a rare tour with West Indies, he was pelted with fruit and rubbish by the crowd in Multan. He threw a brick boundary marker back at them and seriously injured a spectator. A couple of years later, in 1983, he went on the benighted rebel tour of South Africa. The list of players that accompanied him includes Richard ‘Danny Germs’ Austin, the ‘right-handed Sobers’ who died recently after a life of homelessness, begging and drug addiction; Lawrence Rowe, who moved to Florida to escape the stigma of the fallout; Franklyn Stephenson ‘the greatest all-rounder never to pay for West Indies’; and David Murray, son of Everton Weekes, who walks the beaches of Barbados selling ‘stuff’ to tourists. Many of the eighteen that went never recovered from the life ban handed down to them after the tour.

Then there was the rum. There is a famous story that Clarke was discussing his life with a journalist in Barbados, where he’d returned after his retirement. Pushed on whether his career had been affected by Clive Lloyd’s selection policies or the rebel tour, he looked at the bottle on the table and said, “that ruined my career.” His Wisden Almanack obituary retells the tale of his day as a net bowler when England toured West Indies in 1993, long after he’d packed up professionally. He arrived at the Bridgetown nets wearing plimsolls and no socks, evidently “well fortified” on the demon rum and bowled a spell to Graham Thorpe off a short run that was as quick as anything England faced on the tour.

He collapsed and died on 4 December 1999 at his home, aged just 45, the day after Conrad Hunte and three weeks after Malcolm Marshall. I thought of him this week during a World Cup where pace – this time from left arm bowlers that can bring the ball into the batsmen at 90mph – is the coming trend. No-one brought the ball in at a batsman like Sylvester Clarke.

Sonny Liston once said: “Some day they’re gonna write a blues for fighters. It’ll just be for slow guitar, trumpet and a bell….”

Maybe they should write one for Sylvester Clarke, too.

NB: There’s a marvellous story on the rebel tour here, from where I nicked the headline above. Also, Garfield Robinson’s terrific piece for Cricbuzz, that sent me straight to Steve Waugh’s autobiography for his recollections.

One thought on “Sylvester Clarke: Unforgiven”