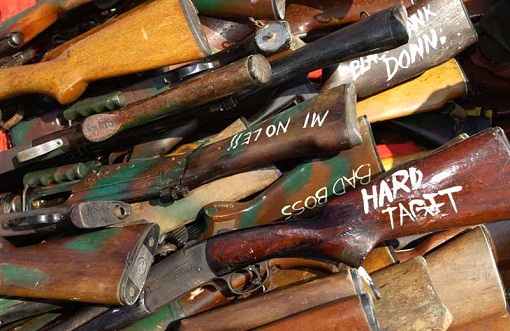 Freud is credited with being the first to state what now seems so obvious: gun = penis. Especially if the animate appendage is in some way inadequate…

This is my rifle, this is my gun.
One is for fighting, one is for fun.
US Military Parade-ground chant (trad.)

Slang lacks the empathy gene. And the sympathy one. I should follow suit but it will have to let me off this week. I do not pontificate – that is for others including the knuckle-dragging pietists who proclaim that their wretched dictator in the sky is fitly chastising those who fail to pay him due obeisance, and those with their deluded mantra of the innate innocence of the actual gun. Cold dead brains being valued above cold dead hands. The 26 victims of the Newtown massacre (plus one for the killer) make this the 31st shooting at an American school since Columbine in 1999 and even slang must pause.

I am lucky, I can find my refuge in words. I can stick to slang of which to my pleasure I know and not to firearms of which, mercifully, I do not. The nearest I approached the latter was at prep school where once weekly we shot five .22 bullets at targets. I recall only what I had learned from books was to be described as ‘the reek of cordite’, which cliché presumably arrived via Kipling or Sapper. Pure bookworm fantasy, of course, because there was also a swirl of blue smoke and the whole point of cordite was the creation of a smokeless explosive to replace the noisome afterbirth of gunpowder. As ever with me, it was the words that counted.

Nor, as I recall, did I imagine a human target, or not of my acquaintance unless it was Mr Game, known as ‘Jark’ and who, fittingly for a Latinist, had a daughter whose name was a gerundive. Perhaps I saw ‘the Jerries’, but on the whole I experienced only a welcome break from Hillary’s Bottom and Kennedy’s Shortbread Eating Primer. (Does Caesar still have jam for tea? Or Brutus a rat?). Nor again, while sadly unblessed with the magnificence of a Johnny Wadd or Rocco Siffredi or even our own Ben Dover (whom I once interviewed: charming bloke), did I in some way envisage the school’s jumped-up pop-gun as a rootin’-tootin’ embellishment of what my parents had once termed a ‘winkie’ but prep school had quickly taught me was termed a ‘cock.’

But this is 1959 or thereabouts. I was 11. The slang lexis, like its collector, was as yet in embryo. Fifty three years on I may know no better; I do know more.

Said it before, doubtless say it again: slang is awash with stereotypes and as the great plagiarist it sees no reason to disdain any of the world’s offerings. Freud is credited with being the first to state what now seems so obvious: penis = gun = penis. Especially if the animate appendage is in some way inadequate. The first to spell it out in so many words, anyway (though I can find neither chapter nor verse and you’ll have to take him, and me, on trust). Shakespeare, as is so often the case when it comes to perceptions of humanity, beat him to it: ‘Pistol’s cock is out and flashing fire will follow.’ How he loved double entendres. (On similar lines Romeo and Juliet gives us ‘Draw thy tool; here comes two of the house of the Montagues.’ and the quick response, ‘My naked weapon is out.’) But the smut masks something serious and so in time so does slang.

Here are the dual-purpose words: axe, biscuit, broomstick, cannon, cracker, flute, gong, gun, gunstick hammer, howitzer, iron, jack, jammy, joint, lightning rod, love-gun, morgan rattler, old man, peacemaker (and the earlier matriomonial peacemaker) peashooter, pencil, persuader, pistol, pocket rocket, rod  (also hot rod, flesh-rod, love rod, rod of correction, rod-pole), rodney, shooting iron, shooting stick, steel, sticker, tickler, tool and torch. To pack means to carry a gun, or a large member. Bang, of course, means intercourse. To shoot or shoot off is to ejaculate as is unload. The semen itself is a bullet. Another term for penis, though not for gun, is enemy. As for my title, taken from a Mickey Spillane book, surely the implication is of premature ejaculation.

I am talking shooting but of course the weapon, Freud also saw, equals a stick, a club, a dagger, a knife: a whole armoury of weapons. Sexy-violent toys for eternal boys. There are other subsets, the hunter, for instance. There are around 120 such terms in all. Not much love but then slang doesn’t go there.

Fifteen months ago I noticed the London riots and how they both brought slang’s creators into sharp focus and at the same time underlined the abyss between me, the ageing collector, and the angry young, running in the streets and using the language that comes from them. Looking left, both figuratively westward across the Atlantic and, within touch, at bookshelves loaded down with the pulp fiction that provides my sources, it reminds me how violent is this medium in which I so delight. Does anyone of whom I read and whose exploits I in turn exploit not carry a gun and once carrying it, not kill. Or, if too weak for aggression, escapes the victim’s role. In the main I celebrate it as a carefree, careless rebel; at times I wonder if the whole lexis is not some angry and frustrated adolescent, lashing out for lack of articulacy.

I don’t doubt my imagery, but I would not push my lexis too far. It is only words and if words are cheap slang is their bargain basement. And as one whose life is laid out in language events like Newtown have an extra, personal dimension: we say what we can, and the bandwagon of horror, sorrow,  anger and even justification is crowded to overflowing. I can speak only for myself but in the end there is only a single comment that holds: words, my Maginot Line against life, quite literally fail me.

8 thoughts on “My Gun Is Quick”