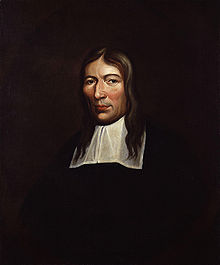 Yesterday marked the 335th anniversary of the release from Newgate prison of Lodowicke Muggleton. He had not been there very long – he was held on default of an unpaid fine, then managed to cobble the money together – but thereafter the 19th of July was celebrated annually as the “Little Holiday” by the religious sect to which he gave his name – the Muggletonians.

It was in February 1651 that a London tailor, John Reeve, received a commission from God. He explained to Muggleton, his cousin, also a tailor, that they were the two witnesses spoken of in the Book of Revelation 11:3, “And I will give power unto my two witnesses, and they shall prophesy a thousand two hundred and threescore days, clothed in sackcloth.” Reeve died a few years later in 1658, leaving Muggleton to continue their work, and to give the sect his name.

What was that work? It was one of the key tenets of the Muggletonians that, having created Man, God took a step back and took no interest whatsoever in our everyday doings. Muggletonians did not preach, nor proselytise. They had no form of organised worship, and indeed hardly any organisation at all. What they did do was meet up, usually in taverns, and talk – often rancorously – and sing Muggletonian songs. They also had holidays, where they might choose a picnic spot instead of a tavern for talking and singing, on the 19th of July, and on the “Great Holiday”, from the 2nd to the 4th of February, celebrating Reeve’s initial revelation.

Among the Muggletonians’ other beliefs were that God had literally made Man in His image – He was five feet six inches tall (or possibly six feet – a topic for rancorous discussion) and He lived in Heaven, which was exactly six miles above the earth’s surface, separated by the sky, which was a solid band. (When hot air ballooning was invented, the Muggletonians banned it, on the grounds that a balloon would crash into the sky.) Man’s greatest enemy was not the Devil, who did not exist, but Reason, which, for humans, was unclean and filthy. Pure reason was the preserve of the angels.

Though there was no formal worship or prayers, one thing the Muggletonians did like to do was to pronounce curses upon those who disagreed with them. Lodowicke Muggleton himself was particularly scornful of the Quakers, with their belief in a wholly spiritual God, and devoted an entire pamphlet to cursing them, the splendidly-titled The Neck of the Quakers Broken or Cut in Sunder by the Two-Edged Sword of the Spirit Which Is Put Into My Mouth (1663). Also in receipt of a Muggletonian curse was Sir Walter Scott. In his novel Woodstock, or The Cavalier (1826), a character named Tonkins meets a violent end. Scott regrets that “his brains had not been beaten out in his cradle” to prevent him growing up into “one of those Muggletonians”. For this he was cursed by Robert Wallis, a Muggletonian from Islington.

It may come as a surprise that a seemingly disorganised sect was still active – still cursing, still taking holiday picnics – in the nineteenth century. But the Muggletonians lasted longer than that. In 1979, one Philip Noakes, of Sevenoaks in Kent, bequeathed to the British Library an archive of Muggletonian documents. He is thought to have been the last surviving Muggletonian, but who knows? There may still be others, talking and singing in the corner of a pub, or picnicking below a sunny sky, six miles under Heaven.