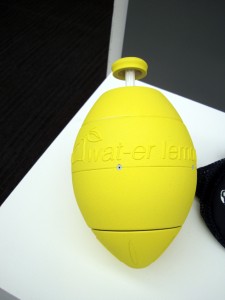 I’ve been wondering how best to pass the time during the London 2012 Olympics. With the torch relay in a few days time, followed by a number of Olympic events in the surrounding area, there will be road closures and, potentially, gridlock. We will probably be better off staying indoors than venturing out into the crowded, cordoned off streets. We could always watch the events on television, but I’ve been thinking that it may be more enjoyable to stage an alternative version of the games…

To start off, here’s a novel idea for any number of people: Wat-er Lemon (see above) is essentially a timed water bomb, which is filled up with water and pumped to gain pressure inside an inner chamber. A timer on one end of the device is set and the game begins. Participants throw the lemon to each other until the timer stops, releasing an explosion of water, and soaking the person holding it. 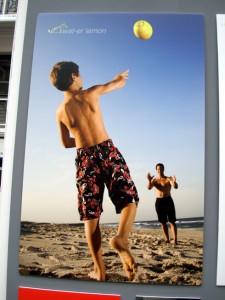 The game was created by young designer, Paul Humphreys, who invented it as part of his degree at the University of Salford, to “encourage physical activity and social interaction between participants.” 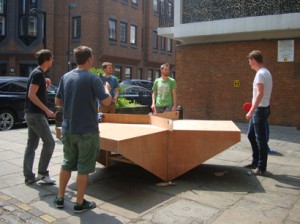 Talking of which, inventive folk at Clerkenwell Design Week came up with the idea of 3-way ping-pong. However, when I passed by, I was surprised to see five players using the table. Doubles and a half? I’m not quite sure how this would work? 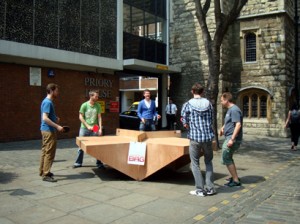 But I can personally recommend Pucket as a fun game for two: 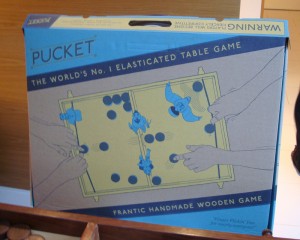 Handcrafted from ethically sourced sheesham and mango wood in India, Pucket is an elasticated table game based on a traditional French game known as Table a l’elastique or Passe Trappe. 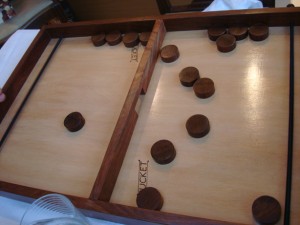 The winner is the person who clears the pucks from their side of the board by catapulting them through a small hole (or gate). Pucks sent through the gate by the opponent must be catapulted back in order to win. Here are some tips on playing techniques, plus a clip from the final of the Pucket World Championships at the Half Moon (that must be why it’s so dimly lit) in Putney:

And if you’re confined to your home alone for the duration of the Olympics, here’s some final food for thought on alternative games for one player only… 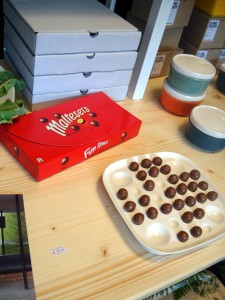 My favourite has to be Malteser Solitaire.

5 thoughts on “Alternative Games for London 2012”