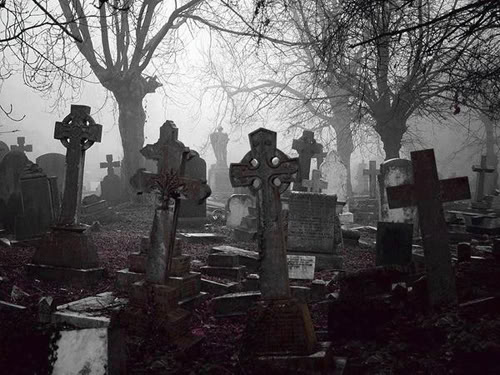 This week Mahlerman is contemplating the peace of the grave…

Over 500 years ago in Flanders, or possibly France, Johannes Ockeghem notated the earliest extant Requiem Mass that contained two melodic threads woven together to make a satisfying, formalized whole – and polyphony had arrived in liturgical music. For hundreds of years before that Plainsong and Gregorian Chant, both monophonic forms, had served Western Christianity when the dead begged recognition. The floodgates were then opened and the last half-millenium has seen the pious Requiem morph into countless forms, often having more to do with the living than the dead. Not many composers since the Renaissance have been able to avoid the form, and few have tried – but even the greatest have expanded the original message to suit their own purposes. The German Requiem of Johannes Brahms really deals with romantic heroism; the War Requiem of Benjamin Britten which we heard a few weeks ago is, with the words of Wilfred Owen, a passionate anti-war treatise from a noted conscientious objector; Mozart’s unfinished masterpiece reveals his anger at the guttering of his candle; and Verdi’s dynamic near-opera seems a long way removed from the graveside.

The intense passion that burns through the music of ‘The Spanish Palestrina’  Tomas Luis de Victoria sets him apart from that master, and from the other outstanding polyphonist of the 16th Century Roland de Lassus. The Requiem Mass, written for the funeral of his patron Maria of Austria in 1603, is without question his supreme masterpiece. Here, the mesmerizing beauty of the Agnus Dei sung by the Tallis Scholars directed by Peter Phillips.

Difficult to think about perhaps this country’s greatest composer Henry Purcell without profound regret. Regret at his early death at 36; but particularly a regret that the strictures placed upon him by the demands of church, court and theatre were unsuited to his unique genius. In a way, he would have been better off working abroad, where fully-composed opera and incidental music, was properly appreciated. Yes, The Fairy Queen and King Arthur contain wonderful music; but are they any more than quasi-operas, with an unfinished feel to them? Purcell died in the same year as Queen Mary, 1695. Here, the magnificent Funeral Sentences, starting with the solemn March, leading to Man that is Born of a Woman, In the Midst of Life, and the final Canzona. Not a Requiem in name or form, but music of surpassing beauty.

Skip forward 140 years and across the channel in France Hector Berlioz was pumping-up the orchestra to a previously unimagined size in delivering his Grande Messe des Morts – in fact he specified that the number of performers should only be limited by the size of the hall. Nearly everything was tripled or quadrupled, timpani required 10 players, four brass bands should be situated at the four points of the compass, off-stage – and the hundreds of singers should be located ‘throughout the space’. Having a care for your speakers, here is one of the few contemplative moments in the score, the relatively serene Hostias, scored for just 8 Trombones, 3 Flutes, Strings, and Male Voices.

Staying in France we find most people’s idea of consolation in the Opus 48 of Gabriel Faure, composed when he was organist at the Madeleine Church in Paris in 1887. The enduring impression in this marvellous work is of a stainless beauty and truth – and in the section here, In Paradisum, a very rare serenity. Strictly speaking this section, along with Pie Jesu and Libera me, renders this work non-liturgical. Nevertheless it was performed at the composer’s own funeral, and I shall be leaving instruction with my children to follow this example as my body is carried through the streets of Peckham by a plumed black horse.

Finally, it feels much like the soundworld of Victoria five centuries ago as we listen to the opening Requiem Aeternam from the Russo-German Alfred Schnittke. I would urge all dabblers to acquaint themselves with the 14 sections of this wonderful work, written in the shadow of his mother’s death, in 1974. No sign of his well known ‘polystylism’ here, although the score calls for an electric guitar – but it is worth remembering that liturgical music was strictly banned in Brezhnev-era Russia but, somehow, this masterwork emerged into the light.

6 thoughts on “Music for Dead People”