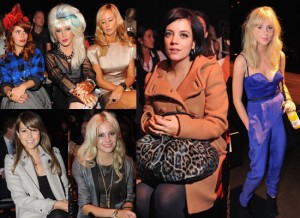 On the second day of London Fashion Week, here’s an exclusive insight into the mythically glamorous world of the ready to wear fashion show:

A  How to get a ticket and what to expect

Even if you’ve previously been to a designer’s show, you’ll generally still have to re-apply each season – and separately for every show you wish to attend. If you’re duly granted a ticket, you should expect to queue outside for at least half an hour to an hour before being allowed to enter the fashion show venue. In London this equates to standing either in icy winds, pelting rain or blistering sunshine. Then you’ll be subjected to the inevitable security guard once over – you may as well be a mad axe murderer.

Next comes the fight for a seat. If your ticket isn’t numbered, your seat is likely to be occupied by a fashion student by the time you arrive. Having to stand behind the seated rows is the ultimate ignominy. And, once in your allocated place, you may be sitting or standing around for quite some time. Shows on the LFW ‘schedule’ usually run much later than off-schedule shows.  Expect them to start at least half an hour late (up to two hours late isn’t unheard of…).

If you’re not c’leb enough to have been loaned a dress by the designer and you’re worried about what to wear, choose black – just in case you accidentally end up in the front row, or get photographed by a teenage fashion blogger. It’s best to keep a straight face throughout the show. Show absolutely no expression of emotion, or any indication of an opinion about what is on the catwalk. Dark glasses a la Anna Wintour are a useful accessory.

After the show, be ready to race to catch the LFW bus, or hail a taxi as soon as the show finishes – especially if you need to trek to the other side of London through horrendous traffic (and roadworks) to get to the next show.

The funding, effort and talent that goes into creating the shows and designs is enormous, but you may find that the magic of a five minute production is about as memorable as an orgasm. Never mind, as the shows can be viewed on the internet almost immediately after the event (without the bother of waiting around, or someone’s head obscuring your view). These days anyone really important – eg A list celebrities and large corporate customers, will probably already have had a sneak preview of the collections they’re interested in. And the likes of Sam Cam, P Middy and Sir Philip Green will be VIP’d in at the last minute, avoiding the queues altogether. It’s also worth noting that, unless you happen to be an A list celebrity or an influential journalist, no one actually cares whether you are there or not. If you’re a buyer, you can see the clothes and accessories modelled and actually get to touch them at showrooms and the LFW exhibition, so it’s unnecessary to queue for hours.at the shows. Many independent boutique owners and private buyers with not inconsiderable spending power (the lowest in the fashion-food chain) are already wise to this.

Note that front row goodie bags are better than second row. Don’t expect to get a goodie bag in the third row, or if you are standing. In any case, goodie bags and press packs are often pilfered by students if you don’t take your seat promptly. Free drinks and nibbles are few and far between – so grab them quickly if they’re on offer. And don’t expect to be invited back stage, or to the after party, unless you are a front row sort of person. 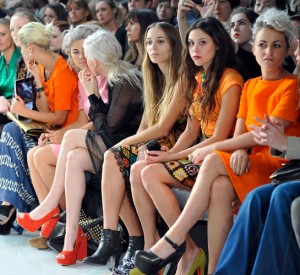 Unsurprisingly, private salon events are now considered more exclusive and desirable to attend than the shows…