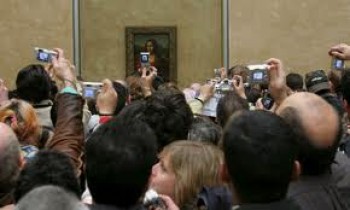 Gaw ponders the attractions of the Big Event.

Everyone knows that we philistine Brits only queue overnight for things like the Next Boxing Day sale, Centre Court Wimbledon tickets or squatting rights to a pavement stone with a view of the latest royal matching or despatching. So what’s all this about people – of all ages too – queuing in the wintery cold through the wee hours to see Leonardo’s court paintings at the National Gallery? Or to see Jerusalem, a rather intellectual and challenging play that began life at the arty Royal Court?

We could argue fruitlessly about whether this sort of thing dispels accusations of dumbing down – it’s a big subject with a mass of conflicting and slippery evidence. However, I think we’re on surer ground when we see it as a sign that we are all of us – and regardless of our brow height – living through the Age of the Big Event. Our cultural landscape is infested by blockbuster art shows (Hockney’s is the latest, with Lucian Freud’s building), arts festivals (I note that ‘Hay’ is now an international lit-fest brand), rock jamborees (a glut of Glasto-lites marks just about every summer weekend). The international pop concert circuit has never been more profitable. Stand-up sells out arenas. Football thrives in obscene fashion despite the downturn. Then this summer we’ll witness – perhaps even in person if you’ve beaten the most amazing odds to nab a ticket – the crowning spectacle of our Age of the Big Event, the London Limpicks.

This was all quite unexpected. Back in the ’90s it was thought we might be witnessing the death of Live. The late Gilbert Adair, perhaps one of the cleverest cultural critics of the last couple of decades, thought so:

So what went right? There’s no doubt that the entertainment industry needed to put its marketing money behind a product that couldn’t be downloaded, pirated, copied or otherwise consumed for nothing. And whilst bytes are difficult to keep tabs on, atoms, in the form of paying customers, can very reliably be counted in and counted out, whilst being required to part with upwards of £50 a go.

I do, though, think there’s more to it than this. Humans are perverse creatures who habitually confound expert prognostications, of course. But that’s not to say we’re unbalanced; in fact, quite the contrary. I think the more our relationships are virtual – much like the one between you and me right now – the more value we put on the odd bit of physical engagement. It becomes a refreshing contrast to our day-to-day disembodiment. Less innocently being there also happens to serve up a pleasing portion of conspicuous consumption. And is there a more conspicuous place to brag about where we’ve been and what we’ve seen than the online world? What would fuel our blogging, Facebookery and Twittering if we weren’t able to show off about the latest thing we’ve been to see? And which you, poor thing, haven’t, but really ought to… Ironic, that.

Incidentally, as I was making this argument a certain logic was making itself felt. Is our very own Dabblerfest™ only a matter of time?