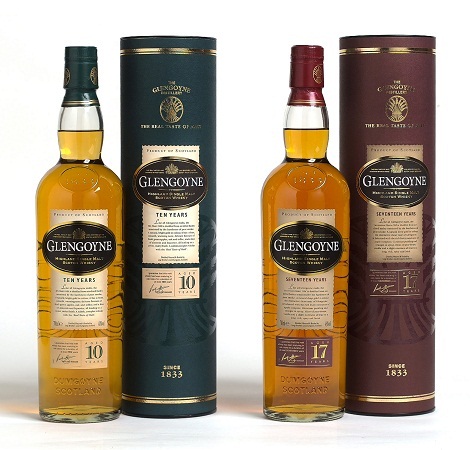 Glengoyne whisky is distilled slower than any other single malt Scotch whisky. This creates a more subtle, complex product in which all of the delicate flavours are freely allowed to express themselves – which description could equally apply to The Dabbler, of course.

The Dabbler is teaming up with Glengoyne to offer our readers and commenters some splendid whisky-related rewards. More details will appear later, but to launch our association we asked Ian Buxton – author of the bestselling 101 Whiskies to Try Before You Die – to give us the lowdown on Glengoyne, which he does in his inimitable, irreverent style…

Situated to the north of Glasgow, the Glengoyne distillery sits right on the so-called ‘Highland Line’ – a mark on the map created by Parliament in the 18th century to help collect taxes (the Lowland distillers below the line paid more duty than the smaller Highland operations). No such discrimination applies these days but, rather in the manner of medieval theologians arguing over how many angels may dance on the head of a pin, whisky enthusiasts have great fun debating the significance of a distillery where the stills are in the Highlands and the warehouses where the whisky matures in the Lowlands.

It isn’t actually of the slightest importance but lovers of the ‘cratur’ are hardly likely to let that stand between them and a good argument. Preferably over a glass or three. Anyway, Brit having negotiated a massively lucrative sponsorship deal with the folks at Glengoyne he kindly asked me to contribute a few words about them to launch this splendid new relationship. As I picked out one of their whiskies to include in 101 Whiskies to Try Before You Die (my publisher likes me to plug the book with neither shame nor restraint) I was happy to oblige. Details of the sponsorship will shortly appear elsewhere on the site – you wouldn’t expect me to grubby my journalist’s integrity (oxymoron alert) with such sordid commerce.

I have a great fondness for Glengoyne for no better reason than it was the first distillery I ever visited. It was on my honeymoon, as it happened, which should have alarmed my wife though whisky didn’t start to play a big part in my life until some years later.

All this was rather more than years ago than I care to divulge so I console myself we got something right. If our marriage was a whisky it would be a very expensive luxury one by now (‘marriage’ conflated with ‘very expensive luxury’: now there’s a topic to ponder). The distillery itself has taken on a new lease of life since it was sold to the current owners who have invested heavily in the excellent visitor facilities, increased production and launched new products. It’s a very pretty location and, even if you’re not on honeymoon, you could fall in love all over again in their romantic little glen (couples only, not recommended for a boys’ weekend).

They make much of the fact that all the malt they use is totally unpeated which, claims the distillery, means you get ‘the real taste of malt’. Whatever the truth of that, this is a very attractive whisky that deserves to be better known.

Starting with the 10 Years Old, which Brit will be liberally dispensing [steady on! – Ed], it’s available at various ages. All are rather lovely but try if you can to get some of the older stuff (17, or even 21 years) when it really comes into its own. If you absolutely want to splash out there’s also a 40 Years Old, in a rather nice decanter, but the price of that one isn’t printable here. For the same money you can get nearly 50 bottles of their ‘cheaper’ stuff and I know what I would rather have. 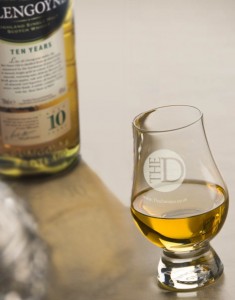 Details about how you can get hold of some Glengoyne 10 Year Old whisky, and a special Dabbler Glencairn whisky glass to drink it from, will be coming soon…