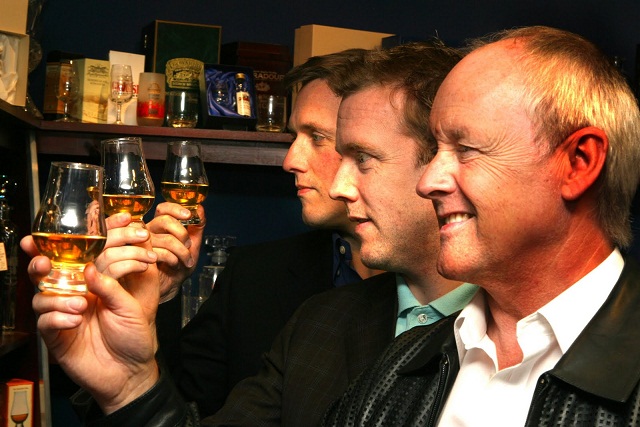 The Dabbler talks to Andy Davidson of Glencairn Crystal, a man on a mission to help you to really appreciate whisky…

You wouldn’t buy a Rembrandt and then magnet-stick it to the fridge under the MOT reminder and the Chinese takeaway menu, would you? And you wouldn’t go to a Michelin-starred restaurant, order three exquisite, bank-breaking courses and then request that the chef ‘just bung the whole lot in a trough’.

Why then, do some so-called whisky ‘connoisseurs’ spend thousands on the most complex, rewarding, pleasure-giving liquids yet contrived by humanity, and then drink them from tumblers? “Philistines!” says Andy Davidson. “Tumblers are useless when it comes to focusing or enhancing the taste experience of whisky.”

Now Andy Davidson – a genial and very Scottish young chap who happens to be the Sales & Marketing Director of Glencairn Crystal – has a vested interest in this, but he also has an inarguable point. ‘Nosing’ is key to the appreciation of whisky – the great distillers, with their old sherry casks or peat fires, go to painstaking lengths to invest their produce with subtle but distinctive flavours – and the shape of the hi-ball or rocks tumbler is just no good for concentrating the aromas. Shot glasses are even worse, says Davidson. They were originally used “to prevent you from smelling bad whisky.” What you need instead, is one of these… 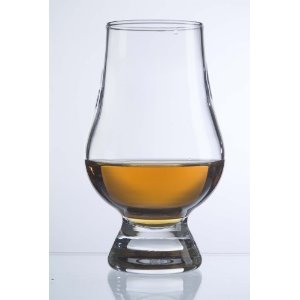 This small object of desire is the Glencairn glass, and it is, according to the experts, the apotheosis of whisky glassware. Ian Buxton, the Dabbler’s own drinks correspondent, insists (on page 217 of his bestselling 101 Whiskies to Try Before You Die) that whisky drinkers should get one. It’s his preferred glass both at home and for his talks and tastings simply because, he tells me: “You need the right glass to fully appreciate a quality whisky and the Glencairn glass delivers the complete sensory experience. If you get one, your whisky will taste better.”

It was Raymond Davidson, Andy’s father, who had the Eureka! moment in the early 1980s. Like so many such moments, it arrived in the pub. Raymond had been a whisky drinker all his life and had often wondered why his tipple, with its particular reliance on ‘nosing’, didn’t have its own dedicated glass when champagne, brandy and countless different Belgian beers all did. He was eventually reduced to asking for his dram in a Paris goblet, before deciding, heroically, that if nobody else was going to invent a glass for whisky, he would just have to do it himself. The distinctive design came to him as he sat in Airdrie’s The Cellar Bar (still an excellent whisky den to this day) but, in the midst of a host of other projects generated by the nascent Glencairn glassware company, he never got round to actually making it.

Two decades later, in 2001, Andy’s brother Paul was shifting some office furniture when he found their father’s original blueprint gathering dust at the bottom of a drawer. By coincidence, Paul had a meeting scheduled that day with Richard Paterson, Master Blender of Whyte & Mackay. He asked the expert to imagine the ideal glass for whisky drinkers and, wouldn’t you know it, Paterson more or less described Raymond’s Cellar Bar brainwave. It was clear that the idea had to become a reality. The Davidson brothers (there are three of them on the board) involved the Master Blenders of Scotland’s five largest whisky companies in finalising the design. It was quickly adopted by the industry, with distilleries across Scotland soon using it in their tasting rooms and visitor centres. Today you can find it everywhere in the whisky-drinking world and over seven million glasses have been sold.

But how does it work? Well, apart from the intangible pleasure of having a proper glass for your drink, and the appreciably voluptuous contours of the design, there is a science to it.

Glencairn use lead-free crystal for greater clarity when admiring a drink’s colouring but, with whisky, the nose is the key. The original inspiration is the sherry ‘copita’, which most distillers used when analysing their casks and blends, but which is too fragile and awkward for general consumer use (especially the “average punter in a Glasgow pub” notes Andy). Glencairn removed the copita’s stem, softened the angle of the tapering neck and increased the size of the bowl to allow a 35ml measure with water to be at the optimum surface contact area for interaction with the air.

“The shape,” Andy explains, “allows your olfactory system to do the business but without making it difficult to drink from. The short and solid base makes the glass comfortable in the hand and affords a more masculine and sturdy feel.”

In other words, you can really appreciate your whisky like a connoisseur, only without feeling a bit, well, effete – although Andy does recount the story of the San Francisco gentleman who, whilst holding a brandy balloon large enough to encompass his head, stated: “Your glass is too small for real whisky.”

Such stories aside, feedback is overwhelmingly positive and Glencairn have supplied glassware for every major whisky you care to name, from Dalmore’s ultra-rare Scotch to craft-distilled American Texas Wild Flower. The design is patented, and the company has frequently had to fight counterfeiters (check for the ‘Glencairn Glass’ stamp on the base).

Andy’s evangelism for his father’s glass is goes well beyond the bounds of his role as Sales & Marketing Director. His passion for whisky is genuine and obvious (check him out from about 1 minute into this video). “Whether it’s a casual drinker buying a Glenlivet 12 or a multi-millionaire buying a £100,000 worth of Dalmore, it’s our job to try and get the message across that you don’t need to pour that into a rocks tumbler, you can get so much more from your whisky by simply using a better glass.

“I get the greatest satisfaction from seeing people using the glass for the first time at a tasting. Many walk away feeling like they have tried whisky for the first time, even if they’ve been drinking it all their life.”

And as ever, the nose has it. You really can’t overemphasise the importance of the olfactory element of whisky appreciation. According to Ian Buxton’s marvellous book, the teetotal actor Johnny Depp is reputed to buy the occasional measure of Lagavulin Single Malt merely to nose its unique aroma. Let’s hope he doesn’t use a shot glass – or, for that matter, display his Rembrandts on the fridge.

You can ‘befriend’ the Glencairn Glass on Facebook for lots more whisky-related business and buy individual glasses from various outlets.

The whisky glass makes an ideal promotional tool. Contact Glencairn for more information on a customised engraved glass, like this splendid Dabbler edition – available soon to our beloved readers. 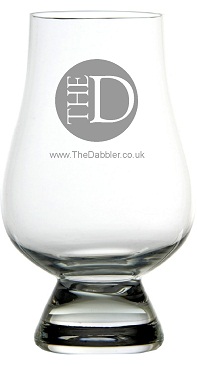