[The story so far…The Liberal Guilt Society has held its annual conference, with Ed Balls, being medically incapable of feeling shame, the only prospective Labour leader who failed to make an appearance… ]

Balls on The Balls

Noseybonk is in Buenos Aires, flat underwater, grinfully glaring up through translucent cobalt waters at a diffused Argentine sun, now wholly blotted by a looming mass of muddied flesh and cotton. It is Ed Balls.

In the previous six and a half minutes the former Chief Economic Adviser to HM Treasury has wobbled over plastic pontoons and been punched into a bog by robotic boxing gloves. He has insinuated himself through space. His body has encroached, sleuth-like, from air-volume to air-volume, entering, filling and edging out of each in turn, the slow and vile belly preceding the horribly deliberate and potentially nimble progress of his fallen arches. And he has made it this far: to the teetering heights of a concrete platform of humiliation, a diving board made to fling a man and his withered dignity at a gigantic crimson puffball, and from there to who knows what flailing doom?

Feeling the camera and the pregnant gaze of Amanda Bryam on him, a vast inane smile opens up on the lower half of Balls’ face – if such a muscular obsenity could be called a ‘smile’- and emits a low gastric chuckling. It is but a reflex. He moves forward, growing at each soft pace more and more like something from the deeps where the grey tine-weed coils the sidling sea-cow. His great ham of a face is tickling as though aswarm with insects, but there is no room left in his brain to receive the messages which his nerve endings are presumably delivering – his brain is full. What the fug use is sixth place? Do something about my fugging profile was the message he had sent to Pamela Spanks six weeks before, and it was she, his Permanent Dosgbody, who had booked the Member for Morley and Outwood on Celebrity Total Wipeout… 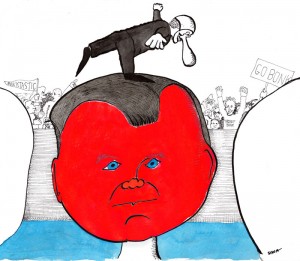 It must be done. Balls proceeds vastly forward to the edge of the platform, his feet moving with horrifying rapidity beneath his belly. The effect from below is that of a dappled volume of warm vague whiteness and of a grey that dissolves into swamps of midnight. And then the horror happens. Fuuuuuggggiiiiiiit! He plummets like a hunk of moon; gravity gasps at the shock.  The crimson puffball sucks him up then instantly spews him out, a poison berry, at its neighbour. Splunch! But the splash never comes. Balls is trapped in a metallic claw, face down and floundering like a sea monster. And there he stays, for blank long minutes.

After some time he makes one feeble effort to heave himself away from the pillar but, incapable of mustering the strength he sinks back, and then begins to curl in upon himself, as though folding himself up for death. At last, through the silence, a weak gurgling sound begins to percolate, but what it is none can tell, for the former Secretary of State for Children, Schools and Families is like a galleon, lurched in his anchorage. The great ship’s canvas sags and crumples and then suddenly an enormousness slips and crashes into the waiting water. There is a sound like terrible bottomless whalesong as an area of many gallons is displaced beneath a catalyptic mass of mud-caked blubber. It is done.

The worst poem ever written

Though he has never offered the remotest encouragement to budding wordsmiths or young artistes, nonetheless reclusive genius Grayson Ellis has acquired a reputation as a poetic guru or mentor. The consequence of this widely-held misconception – created in no small part by an unfortunate misprint in the 1992 edition of the Artists and Writer’s Yearbook – is that Janice Moor, the editor of the illustrated Ellis monthly magazine Badgers, Owls and Bacon Grill, is daily swamped by the pitiful efforts of versifying hopefuls.

Over the years Janice has devised a system for handling this dismal flow of ill-scanning, badly-constructed tripe. Atop her desk sit three cavernous trays. One is marked ‘Slavoj Zizek’. The second is labelled ‘Art Garfunkel’. The third is ‘Other’.

On the very day that Ed Balls was plummeting towards wet failure on Celebrity Total Wipeout, Janice’s postbag contained no less than eighteen missives from deranged academic Zizek. Without even bothering to look at them she tossed the thick, spider-scrawled envelopes to the first tray, which automatically tipped them down a chute and thence, through numerous pipes and tunnels, to an ever-blazing furnace deep below the earth’s crust.

Art Garfunkel – or ‘The G’ as he insists on signing himself – had merely sent the one poem today: yet another ode to Kathryn, this time in the form of a quite insufferably cretinous conversation:

Janice swallowed a slug of rising bile as she scrunched the falsetto warbler’s literary pretensions in a ball and flicked them into Tray 2. But as she rose to head kitchenwards for a cup of camomile, her gaze was drawn once again to the paper at the top of Tray 3: ‘Other’. Distracted, she picked it up and read it again. Then again, carefully and with furrowed brow. It was, Janice decided, quite possibly the worst poem she had ever read – no small claim in her line of work.

The title was ‘Blackspot Poem’ and it was by one Messiah White, who described himself as an ‘award-winning activist’.

Janice read it through once more, trembling. Upon encountering the line “unhomogenized by corporate toxins” for the third time, she knew what she must do. She folded the poem, placed it in an envelope and wrote out the address: Boris Johnson, Mayor of London; City Hall, London SE1…

To be continued. With apologies to Mervyn Peake and ‘Swelter’. Noseybonk can see you. Illustration by Stan.