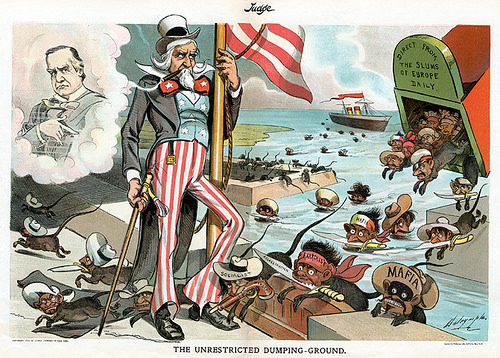 Thanksgiving is almost here, and Americans everywhere are dreading the highjacking of dinner table conversation by the grumpy uncles and drunken cousins who think we all want to hear their political rants and favorite conspiracy theories. Remember the year when that sweet old great-aunt came out of the closet as a birther right after President Obama’s election? Her twinkly smile morphed into a paranoid grimace and she didn’t let up until we plied her with enough brandy to put her to sleep in front of the TV. Maybe it was all a bad dream. This year promises to be even worse, what with the wacko presidential candidates and the xenophobic hysteria unleashed by the Paris terrorist attacks. A high-minded debate on how to handle the Syrian refugee crisis is unlikely to unfold over the turkey carcass when media discourse has already gone as far out as rabid dogs, closing mosques, and making all Muslims wear identification.

The leading fear-mongers are spinning a worst-case scenario that goes something like this: Foreigners pour into the country. They have no respect for the existing institutions and culture. They bring their own foreign laws and strange religion. Their houses of worship spring up all over the landscape. In a matter of decades America as we know it ceases to exist. Our culture virtually disappears as the newcomers impose their own foreign ways. Sounds awful. But wait, it already happened, back in the seventeenth century! Ask the Native Americans how they feel about unrestricted immigration. Maybe they wish they’d built a wall.

That’s the inherent conundrum in any discussion of immigration in a nation built by immigrants. Depending which narrative thread you care to follow back through American history, we are either a nation that welcomes “your tired, your poor, your huddled masses” or a nation steeped in venomous hatred of “the other.” You can find plenty of evidence for both faces of America in the nation’s story. In the 1880’s, at the same time as Emma Lazarus was writing the welcoming words that would be engraved on the Statue of Liberty, immigration from Europe was peaking and so was a nasty anti-immigrant fervor. The nineteenth century’s successive waves of immigrants prompted anger against Catholics, the mafia, socialists, anarchists, anyone who wasn’t the ideal White Anglo-Saxon Protestant. The Irish, Germans, Italians, Chinese, Jews, all took their turn as the butt of nativist prejudice. In 1903, the very year that the bronze plaque with Lazarus’s poem was installed on the Statue of Liberty, a political cartoon titled “The Unrestricted Dumping Ground” was published in the magazine Judge with the slogan “imported direct from the slums of Europe daily.” That the racially stereotyped immigrants are depicted as rats says it all. The figure of President William McKinley, assassinated by the son of an immigrant two years earlier, hovers disapprovingly over the scene. He had made no secret of his fears that immigration threatened to pollute “the native racial strain.”

So I suggest to my fellow Americans that if the conversation this Thanksgiving takes a negative turn towards the Syrian refugees and the alleged threat posed by Muslims, just smile benignly and ask the speaker when his ancestors arrived in the New World. In the spirit of the celebration everyone can give thanks for their ancestors’ bravery and fortitude in the face of prejudice. The point was made in an 1893 cartoon showing the well-dressed opponents of immigration and behind them the looming shadows of their ragged immigrant ancestors. The caption reads: “They would close to the new-comer the bridge that carried them and their fathers over.” 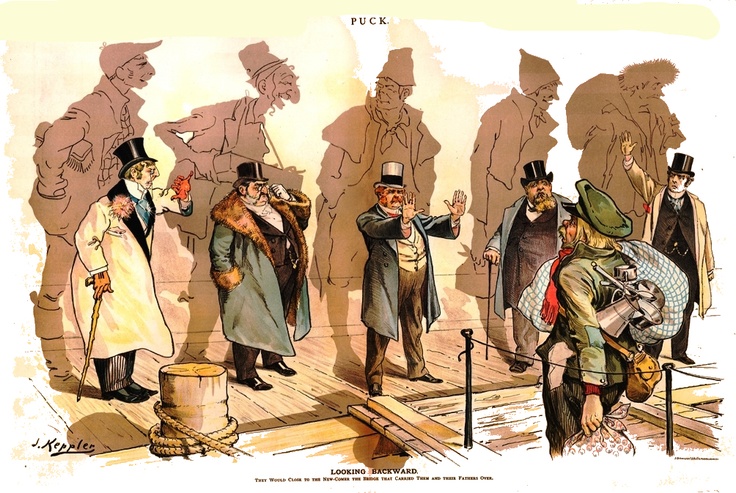 Happy Thanksgiving to one and all!