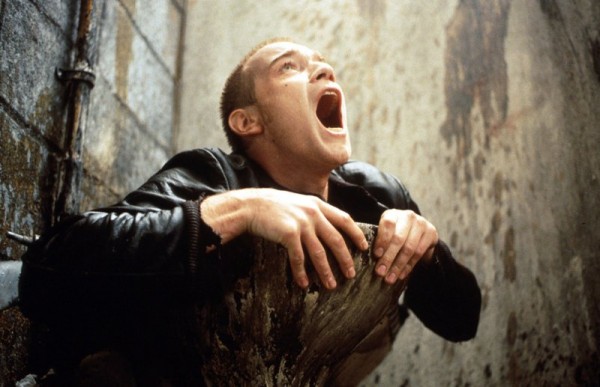 Irivine Welsh’s novels contain some of the densest slang writing in fiction. Jonathon ‘Mr Slang’ Green ventures into the dark side of Scottish language…

It is a good thing that Eric Partridge was spared Irvine Welsh. Not because the former was a bad lexicographer nor the latter a bad writer, but because ‘the Word King’, unlike your correspondent who is of course but a mere commoner, was really rather optimistic  about the lexis within which he toiled and definitely squeamish as regarded its excesses. Like a hopeful social worker donning rosy specs to render palatable the nastier morsels of reality he saw slang as the picturesquely grubby end of ‘Merrie Englande’, with some good-natured, even humorous ‘Dickensian’ villainy thrown in for good measure. He saw his slang speakers, one senses, as essentially good blokes. Sometimes they might go too far, and he owned to distaste when it came to the obscenities, and as a professional had to place duty before personal choice.

Mr Welsh’s schemies, with their sex and drugs and taste for punk and Northern Soul, are not the ‘Tipperary’-singing chirpy cockney sparrers whose conversations, c. 1916, set Partridge on his life’s work.

Nor was the violence he witnessed on the Somme that of Leith Castle and Environs, the geography of which one may now look up, complete with pitiless pictures, on Wikipedia. Leith, I appreciate, has largely gented up, but that had yet to take off for the decayed 1980s cockpit that offers Welsh’s dopers and bamheads their arena. (That Cables Wynd House, better known as The Banana Flats and home of Welsh’s ‘Sick Boy’, is listed as being of ‘brutalist architecture’ is too just to miss). Partridge would not have enjoyed puppies tossed down waste chutes, let alone 5-month old foetuses; he would not have relished competitions among working men as to the length of their excreta; he would have shied from the ubiquitous drugs (always his weakest area) and he would definitely have disliked the rampant nihilism that underlines Trainspotting (1993) and its prequel, this year’s Skagboys.

In a phrase, Partridge’s proles knew their place. Welsh’s do not, or if they do, then it is at the base of the social structure, dedicatedly if dysfunctionally hacking away at the foundations. Like Neil Griffiths (Grits) and Keith Sampson (Powder), who followed his  success with Trainspotting, and with each of whose similarly phonetically presented vocabularies his lexis overlaps in 250 terms,  Welsh gives us the voice of what those who loathe and fear him just as much as he does them, would term ‘the chippy yob.’ (Whether Welsh, in Skagboys, is consciously punning when he makes the college dropout Renton a carpenter, i.e. slang’s ‘chippie’, I cannot say).

What Partridge could not have resisted, however, is the pure proliferation of slang. One has to cut first through the phonetic transcriptions: isnae for is not, heid for head, whae for who and many more, but that done Welsh is good for 1300 unique slang terms (with many cropping up in multiple books).  His is some of the densest slang writing one can encounter outside a glossary (and to his credit there is never a sniff of effort; the words are there, just as was true of Dickens or of David Simons’ The Wire, because they fit there; Welsh can be exhausting but he isn’t showing off).

And then we have the added ingredient:  Scotland. Sometimes this is easily discerned. There is, for instance, strictly localized rhyming slang. For instance, Christopher Reeve = a drink (a ‘peeve’, itself either from bevvy or Romani peevo, whisky or even West Scots piver, to urinate), Danny McGrain = a vein, Dennis Law = cannabis (i.e. ‘draw’), Hampden roar = the situation (‘the score’), Ian McLagen = sexual intercourse (‘shagging’), Jam Tarts = Hearts (of Midlothian), mantovani (usually cut to manto) = women (‘fanny’) and zorba, which takes ‘the Greek’ as spoken, and as simple zorba means sick (and requires a Leith pronunciation), or as zorba’d sick of, which in turn works through Zorba the Greeked = leaked = pissed, i.e. pissed off. There is also, and very common in Welsh, scooby, as in scooby-doo, a clue, although A can also scooby B, i.e. ‘do’ (violently) or ‘screw’ (economically or emotionally) them. However scooby can also be found in English sources, and even among American students.

Alongside which are ‘straight’ Scotticisms: blooter, to kick (or as a noun, a swallow of alcohol), cowie (AIDS), draftpak, a lowlife (and as such fond of take-out sixpacks), foosty-minged, aimed at women and literally ‘smelly cunted’, cunty-baws, i.e. balls, which targets men and presumably implies effeminacy, buftie-boy, a homosexual, ganting, eager, Hun and Jambo, supporters respectively of Glasgow Rangers and Heart of Midlothian, keelie, a thief, cludgie, a lavatory, pagger or rammy, a fight, pish, invariably substituted for piss in whatever sense, stoat-the-baw, a child molester, swedge, to fight, ming a stench and thus the insult minger.

At which point, it is seemly to pause. Because while I have around 80 of Welsh’s terms marked as ‘Scots’, am I missing the point. I may mean Scottish slang, but is that correct. For some terms, yes, and some may be all Welsh’s own work – certainly there are no instances to be found outside his work – but are for instance cludgie (seemingly linked to dialect’s cludge, dense, muddy stickiness) or keelie (cited for 1888 in the EDD and defined as a ‘street arab’ or ‘pickpocket’) slang, or simply Scottish colloquialisms and part not of slang but of popularly if not formally accepted Scots. Not Scottish Standard English, of course, but part of a wide informal vocabulary that still doesn’t qualify as its antithesis. There are parallels here with Australia, where one can slip all too easily into assuming that any remotely non-standard Australianism is slang. Things are not always so simple: ‘pull out, dig, the dogs are pissing on your swag’ may use slang terms but the phrase itself is perhaps simply ‘highly informal’. Though informal presents its own problems: if, as has been suggested, ‘standard’ speech also equals ‘morally condoned’ speech, then anything that falls outside that vocabulary and is thus ‘amoral’, or at least threatening and dangerous is best corralled as slang.

Let us forget the labels. Welsh deals with what was not yet stigmatised as the underclass. Schemie, the Scottish term taken from housing scheme (estate in England) is a precursor of chav. The words, used to abuse self and others, to savage the world one inhabits and that which stands in the unattainable distance, form a true counter-language whether slang, colloquial or informal. The speech of his incoherent and ultimately impotent junkie rebels qualifies perfectly for such categorization.

A version of this post originally appeared on The Dabbler in November 2012.

12 thoughts on “Celtic Centre – the Slang of Irvine Welsh”