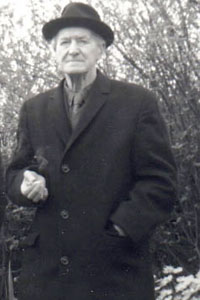 The leading lexicographer of slang salutes his predecessor…

How embarrassing. There he is. Always has been. Right under my nose. Or at least right behind me. And I never noticed. My very own predecessor: without whom and all that stuff. Really. I had better make amends.

Eric Honeywood Partridge was born in 1894 on a farm in the Waimata Valley, near Gisborne, North Island, New Zealand. He moved with his family to Brisbane, Australia, in 1907 and there attended grammar school. His love of literature showed itself early: aged thirteen he had already written a novel (an English public school story) and a number of short stories. His translations from French poetry began appearing in 1914. He was also, thanks to a literary father, able to use dictionaries – ‘those… sources of sober, never-disillusioning entertainment’ – from the age of seven. He won a scholarship to the University of Queensland  but as it did for so many of his contemporaries, the First World War interrupted his studies, and in April 1915 he joined the Australian infantry. He served successively in Egypt, at Gallipoli and on the Western Front where he fought in that sub-section of the battle of the Somme known as ‘the second Pozières’. More than 15,000 ANZACs died fighting for this single ridge; Partridge was wounded but he survived.

Back in Australia he returned to university, took his BA, then departed for Oxford University where he read for his MA in eighteenth-century English romantic poetry and for a BA in comparative literature. In 1927, after some desultory teaching experience, he launched himself on a new career: that of  ‘man of letters’.

To back this he founded the Scholartis Press (a blend of ‘scholarly’ and ‘artistic’); it survived until 1931 when, like so many small businesses, it foundered in the Depression, leaving its proprietor bankrupt. There were nearly 100 titles in all. Twenty-two came from Partridge himself, either as author or editor. Most, including three novels by ‘Corrie Denison’ (Partridge’s pseudonym), were ignored by the literary world but three of them indicated an important new interest for the editor-in-chief: Songs and Slang of the British Soldier, Partridge’s edition of Francis Grose’s Classical Dictionary of the Vulgar Tongue (1931) and a British edition of Godfrey Irwin’s American Tramp and Underworld Slang (1930).

In 1932 Partridge went freelance and a year later came his first essay at lexicology: Words, Words, Words! This was swiftly succeeded by his first look at the topic that would dominate his professional life: slang. Commissioned by Routledge, where the publisher Cecil Franklin had noticed his language-related Scholartis publications, Slang To-day and Yesterday appeared in 1933: it was the first exhaustive attempt at a history and analysis of slang since Hotten’s introduction to his Modern Slang and Cant of 1859. The book that sprung from these relatively tentative explorations into the topic, A Dictionary of Slang and Unconventional English, was published in 1937. It was based on, but expanded far beyond Farmer and Henley’s Slang and Its Analogues, to which Routledge held the rights. Seven expanded and amended editions would appear in his lifetime. An eighth, posthumous edition (edited by Paul Beale) appeared in 1984. A Dictionary of the Underworld, dealing with English and American cant, was published in 1949; revised editions appeared in 1961 and 1968. A thoroughly revised new edition of DSUE, covering the period from 1945 and notable in its admission of American slang for the first time, appeared in 2005, edited by the American slang lexicographer and lawyer Tom Dalzell and an English colleague Terry Victor.

Assessing Partridge’s slang work nearly 80 years since he began it is hard not to see it as out-dated. His refusal to include American slang might just have been feasible in 1937, but it was always a debatable decision, and one that looked foolish in the post-World War II world when American culture played an ever-increasing role in that of the UK. Nor was Partridge ever very confident with that modern world: the phenomenon of the teenager and the slang they created eluded him; to him all drug users were ‘addicts’ and he accepted too many secondary sources. He worked from print sources (although he does not offer citations in DSUE and although they exist in the Dictionary of the Underworld, there is no attempt at full-scale ‘historical’ sampling) and fell foul of those who prioritized fieldwork. The slang lexicologist Julie Coleman has written informatively on his clash with the American cant specialist David Maurer, played out in the pages of American Speech. Maurer may have been right, as much as lexicography offers a place for that weaselly monosyllable, but from what I’ve gathered, give me Partridge as a person ever time.

Because Partridge, above all, offers a human dimension. He has, in a world where wit is at a premium, a sense of humour. As Anthony Burgess put it, he was not a linguist but a philologist, quite literally a ‘lover’ of words. And on his amorous passage he trips, he stumbles, he falls. Cheerfully refusing to admit linguistics into his lexicographical work, he always wants to make some kind of statement. The OED, especially when it comes to slang, is filled with the hard-nosed, factual, but ultimately frustrating admission: ‘Etymology unknown’. Such an admission was wholly alien to Partridge. For him something was always better than nothing – even if that something often erred dangerously on the side of guesswork. Indeed, Partridge’s refusal to acknowledge defeat could lead to terrible howlers (and he was duly pilloried by such as Gershon Legman), but he could also be inspired.

On either count his work remains of profound importance. In the long run, as Tom Dalzell has suggested, the work itself – like all lexicography – may be flawed, but what matters is that Partridge’s dedication brought it into a new century , and in so doing perpetuated slang lexicography. The author of the DSUE may lack, as Randolph Quirk has pointed out, ‘the magisterial scholarship, meticulous authentication and consistency of presentation’ that make the OED so monumental a work, but without Partridge there could never have been the same level of modern slang lexicography. The OED cites him more than 770 times. I’m not sure whether my own career truly amounts to ‘without whom’, but the hat, without a doubt, is tipped.