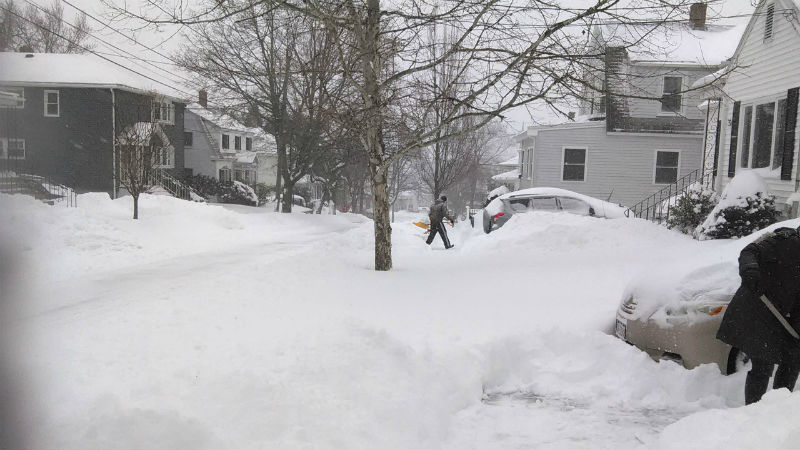 As an exceptionally cold winter grips the east coast of the US, Rita watches the country’s infrastructure start to crack under the ice…

It’s Pothole Season here in Maryland and pretty much everywhere in the U.S. this year, including states that rarely saw snow or ice in the past. Some people like to refer to the season more romantically as a snowy winter wonderland, a magical landscape of sparkling icicles and frozen ponds. Children building snowmen, sledding, skating, and indulging in snowball fights, all the pretty images on Christmas cards and winter sports brochures.

But for those of us who need to get from point A to point B it is what the ice and snow leave behind that becomes most memorable and most irksome. Being trapped indoors by heavy snow is, well, child’s play compared to venturing out once the streets are plowed only to bump and rattle over a pockmarked moonscape. A couple of years ago I hit a deep pothole on a local road that not only blew my tire but bent the wheel rim so drastically out of shape that it had to be replaced, at considerable expense. This year there is a street in my daughter’s neighborhood with so many potholes that it is more a case of a few tiny islands of paving amid the holes than of a few holes amid the paving. Most drivers make elaborate detours to avoid the street altogether. I thought my daughter might be exaggerating when she warned me about it and I took my usual route anyway. It was like driving through a war zone, a street torn up by heavy shelling. I was lucky to emerge unscathed at the other end, but I did worry if the baby nestled in his car seat in the back might have suffered shaken baby syndrome. 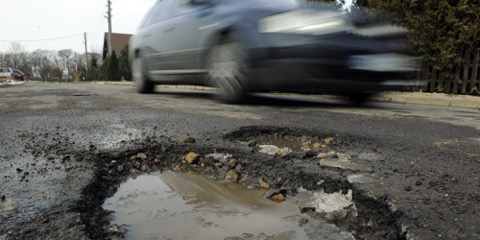 Of course potholes would be much less of a menace if they were repaired in a timely fashion. The pothole that ruined my wheel remained for weeks even though I called the county to report the hazard. There wasn’t even an orange cone to warn drivers. Local jurisdictions are either too strapped for cash to keep up with the damage, or are choosing other priorities. It is all part of “America’s crumbling infrastructure,” a political meme that pops up regularly in Washington’s partisan debates but eludes solution. Everyone agrees on the problem, but they can’t agree on a way to pay for a solution. “How can we spend billions on foreign wars but leave the homeland falling to pieces?” goes one side’s refrain. But it seems we can.

A case in point occurred just the other day on the notorious Beltway, the highway that rings the nation’s capital like one of the lower circles of hell. “Abandon hope all ye who enter here” is no exaggeration during rush hour, which now seems to last all day. There are residents of the area who suffer from Beltwayphobia, a fear of driving on the freeway’s snaking curves alongside speeding trucks and aggressive lane-hopping drivers. To these hazards we can now add another. As one unfortunate woman drove under a bridge, large chunks of concrete broke off and crashed onto her car. By some miracle she wasn’t injured but her car was clearly in need of some expensive bodywork. According to an alarming study reported in USA Today last April, her vehicle was one of a quarter billion a day that pass over or under one of the nation’s 63,000 structurally unsafe bridges. Meanwhile inside the beltway, politicians bloviate while American crumbles.

John Oliver gave the crumbling infrastructure topic his unique comic treatment on Last Week Tonight. It’s a comedy show that manages to dispense more serious news than actual news programs do. The show is a surprise hit; apparently Americans enjoy hearing the nation’s dirty laundry aired in a naff British accent. Actual Americans who do the same are accused of denying “American Exceptionalism.”

As I write my phone pinged with yet another Winter Weather Advisory, including the dreaded words “wintry mix.” There’s been as much freezing rain as snow this year and record-setting low temperatures, giving the snowdrifts a gleaming sheen like the icing on a traditional English Christmas cake. Lovely to look at through the window, but far more hazardous to pedestrians and drivers. It seems that all the disappearing ice from the Arctic is showing up right here in the U.S.

Of course all this ice and snow has brought a warm glow to the hearts of global warming deniers. In a gesture that seems to sum up the American predicament, James Inhofe of Oklahoma brandished a giant snowball on the floor of the Senate, insisting it proves that “it’s very, very cold out” and therefore global warming is a hoax. Republican Senator Inhofe happens to be the new chairman of the Senate Environmental and Public Works Committee. He once compared the Environmental Protection Agency to the Gestapo. With thinkers like this in charge of science policy and infrastructure, there’s not a snowball’s chance in hell of solving America’s problems, even the simple ones like filling potholes.