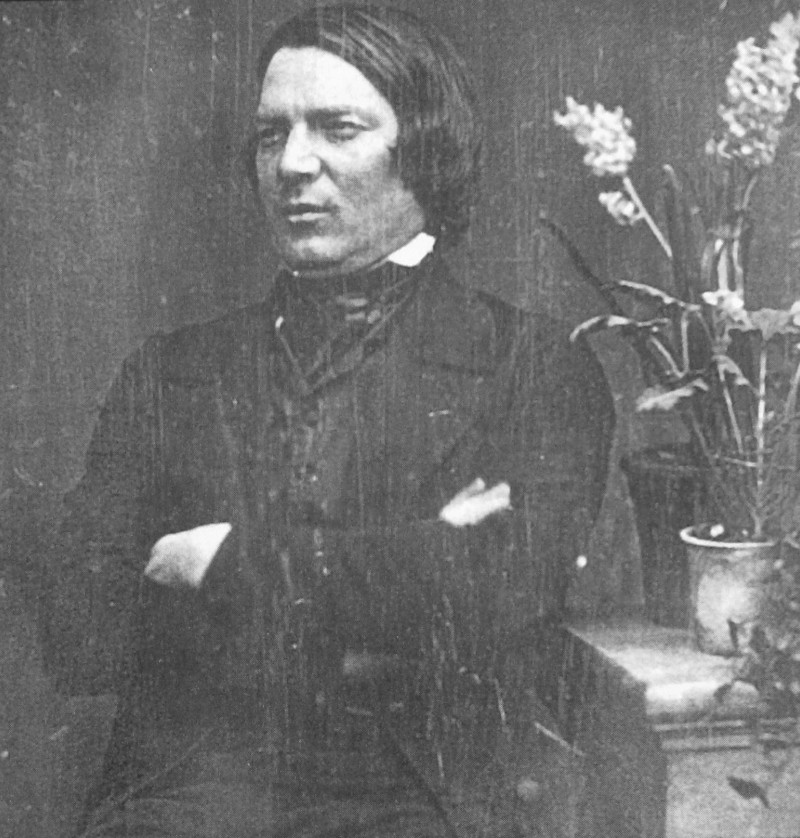 This week Mahlerman gives us the four great compers of Das Lied: “a Teutonic soundworld to which few non-German singers posses a passport”…

In early 19th Century Germany,  ownership of the universal domestic pianoforte expanded from Royalty and the landowning super-rich to embrace the new middle-classes; and in parallel with this expansion emerged just four major composers who produced over one thousand songs between them, to cater for this new socio-economic group.  And what a strange quartet they make.

All of them were made of the right stuff but only one, Robert Schumann formalized his relationship with Clara Wieck, in 1840.  Two others, Franz Schubert and Hugo Wolf (and probably Schumann also) contracted syphilis, which contributed to their early deaths. Both Wolf and Schumann attempted suicide by drowning, both asked to be admitted to an insane asylum, and both ended their days there. Only Johannes Brahms had anything like a ‘normal’ life, but he weaves himself back into the story care of his life-long love (almost certainly unconsummated) for Schumann’s wife Clara.

Johannes Brahms was born into a working class Lutheran family in Hamburg in May 1833, and he grew into a beautiful, shy, golden haired youth.  Fame, and with it wealth, was a long time coming, and he was in his late thirties before the German Requiem made his name, releasing him from money worries.  He enjoyed the fruits of his genius, eating and drinking expansively and adding the patriarchal beard that completes the more familiar picture we have of him.  He wrote more than 200 songs and duets, most of them infused with the folk elements, the volkslieder, that he held so dear.  To this framework he added the values of seriousness, respect and rectitude that was the still centre of life for the German bourgeoisie.  His Opus 91 comprises two exquisite songs supported by viola (Brahms’ favourite instrument) and piano, played on this video by Daniel Barenboim and the sometime leader of the BPO Wolfram Christ, and sung by Jessye Norman; here the first of them, to words by Friedrich Ruckert,  Gestillte Sehnsucht (Stilled Longing).

Brahms cared little for the poetry that was the wellspring, the ignition, that lit the poetic flame within Robert Schumann, one of the great musical car-crashes of the 19th Century.  He possessed a lyrical imagination of the highest order, but the pure essence of his genius was rarely expressed on a large canvas – the symphonies, while containing some beautiful effects, usually fail through poor construction, and the sense that the composer has bitten off more than he can chew.  Reduce the scale, shrink the ambition, and a formal simplicity, a poignant sentiment emerges that perhaps was not equalled even by Schubert.  The Liederkreis cycle of twelve songs is a great example of Schumann’s genius for the small scale. Intensely romantic, they inhabit a Teutonic soundworld to which few non-German singers posses a passport.

Here I have reproduced the marvellous poem by Eichendorff that forms an equal part of the fifth song Mondnacht (Moonlit Night), and it would be a stronger man than I who could remain unmoved by these magical reflections and their hidden meanings:

It was as though the heavens
Had silently kissed the earth,
Such that in the blossoms’ lustre
She was caught in dreams of them

The wind crossed through the fields,
And swayed the heads of grain
The forest softly rustled
How starry was the night

And my soul spread
Far its wings
And sailed o’er the hushed lands
As if gliding home.

Here is the German Lyric Bass-Baritone Matthias Goerne to sing the piece in a way that invites no comment.  The pianist is Eric Schneider.

And then there was Hugo Wolf, another suicide in waiting.  Born in the same year as Gustav Mahler, 1860, his short life just crept into the 20th Century.  At age 28 he had written practically nothing – and then, in a kind of fever, he penned 53 Morike lieder, 51 Goethe lieder, 44 Spanish lieder, 17 Eichendorff lieder and a dozen by Keller plus a few individual pieces. Over 200 lieder in less than two years – then silence for two years during which time he suffered an almost complete mental collapse, there being no real cure for the syphilis he contracted in a brothel. In November of 1891 the muse returned, and he wrote 15 Italian lieder, sometimes several in one day. Then, a month later, the muse vanished – for five years.

The second volume, completed in a month, appeared in 1896.  He was 36 years old and had seven years to live. At the close of that year a friend sent him some of the poems of Michelangelo (yes, that one) translated into German, and he immediately composed melodies for the first three before madness returned. He never completed the cycle but, in a period of remission before his final visit to the asylum, he revised the Three Michelangelo Lieder, the second of which, Alles endet, was entstehet (All that is created, must perish) is sung here by the late, lamented Dietrich Fischer-Dieskau standing just to the side of Daniel Barenboim.

Im Abendrot (In The Evening Glow) D.799 by Franz Schubert. What to say, that hasn’t already been said. Probably written a couple of years before his death at the age of 31.  Open the score and it looks nothing much.  Get hold of Hans Hotter and Gerald Moore in 1957 (I did) and see what they can make of it. Get a hankie. Try and be strong. Fail.

Mahlerman is currently away. This is an updated version of a post that originally appeared in February 2013.