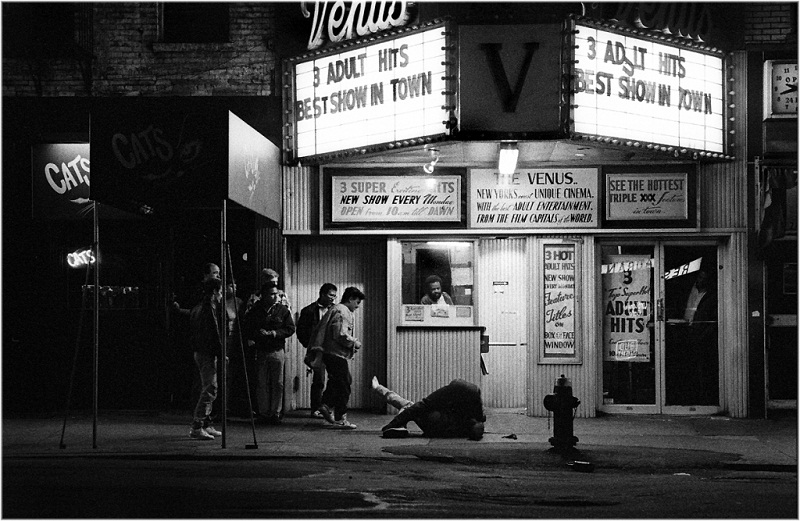 This is it, I promise. The last one. But pondering the verbose titles of the 19th century pornography, I could but compare them with modernity, or nearly so: the mass-produced paperback equivalents of the late 20th century. The Net is rich with listings. On your behalf I took a look.

We may despise Disney for many things: the xenophobic racism of old Walt’s hiring policies, the ‘family-orientated’ banality of its cartoons, the destruction-cum-dumbing down of as many children’s classics as its millions can buy, but, for those whose reading matter requires but a single hand, its greatest sin is the destruction of 42nd Street, New York City and especially the blocks between 6th and 8th Avenues. Prior to their gelding by the Mouse, what a cornucopia of delight those seedy blocks offered the pornophile. Nowhere more than in the numberless ‘bookshops’, wherein one found piled high and sold cheap the wondrous products of the real-life version of Orwell’s Pornosec, the ranks of what slang terms ‘stroke books’. The heyday of such publications, the 1970s, followed on the liberalization of America’s censorship laws, and for a (literally) fantastic decade the titles rolled from the presses and into the mac pockets of their purchasers. Companion Books, the Rear Window Series, the Kennel Club (so unlike the home life . . . ), the distinctly misplaced Liverpool Library Press (hommage, perhaps, to the Fab Four’s ‘Paperback Writer’) and many others.

Reading, some decades ago, the memoirs of a porn-book hack, it appeared that one sat, as in a schoolroom, at rows of typewriter-laden desks, starting the day by going to the front of the ‘class’ to choose, from an array of Xeroxed piles, a synopsis. The choice was yours. But checking through the titles, they seem distinctly reminiscent of those jokey ‘create your own jargon’ tables, in which nouns and adjectives are listed in columns, open to a pick and mix selection – any trio making a suitable phrase. Thus too Pornosec titling.

Looking at those books, what strikes the lexicographer is how incredibly narrow is the vocabulary of titillation. And, for I speak as one, how grim a commentary on the tropes of male excitement. There were nearly ten thousand titles in all, but the range of words that were set above the obligatory cover drawing, hinting at fantasies within, is very constrained. The taxonomy of Eros, at least for these purposes, is a far from many-splendoured thing.

Top of any list comes the family: some 586 titles (The Family Eats Out, Family Reunion, Coming with the Family, etc.). And its preferred member; Mom, who features some 1008 times (America’s companion staple ‘apple pie’ seems to have escaped). Sister is similarly enthusiastic (428 titles) although brother only makes it to 107. There are 556 daughters (but a mere 99 sons) and while auntie pitches in at 198 appearances, uncle is positively celibate at 27. Dad’s a relative second-rater with 146 as is nephew with a mere ten. Niece, meanwhile, achieves 148, mainly of a painful sort (Bondage Slave Niece, Whipped Young Niece, Leather-bound Niece). At one remove the neighbours are ever-popular, with 257 shots at fame. Wives, brides and newlyweds between them turn up in around 1000 adventures. Virgins, invariably hot, naughty and overwhelmed with eager urges, bid farewell to their hymens on 136 occasions. Nymphos, with no need for restraint, come on the scene 44 times; swappers 48. Incest, bringing all these happy families together, claims 133.

As for proper names, few are specified, but how strenuous are the efforts of Linda (20 titles), Cindy and Candy (11 per head) and Jill (8), to satisfy our lusts. Kelly, Phoebe, Jenny, Jane and Sally do their solo bit. Job descriptions, however, are common. Teacher seems an especial favourite (381 titles), followed by nurse (124), secretary (94), waitress (21) and farmer (19). More surprising, though each unto their own, are the 76 librarians: Line Up for the Librarian, The Angry Librarian, Lash the Librarian!, Chained, Whipped Librarians, The Librarian Licks Big Ones and the pleasingly punful The Overdue Librarian to name a few. Clergymen feature 42 times (The Evangelist’s Wife in Hell, Preacher’s Wife in Bondage and Sex Sated Minister), although nanny, but this is America after all, makes it but half a dozen times. Music teacher (as in Ravaged Music Teacher) and mechanic (Naughty Lady Mechanic) are one-offs.

Finally the gay scene. On this menu chicken , i.e. an underage boy, is the dish of choice: Whipped Chickens, Chicken Master and Dirt Road Chicken are three of many, while its antithesis, stud, is good for 91. (As for the dirt road, it has its place, e.g. Butting In On Mom.) Buddies are popular, as are cowboys and ranchers, marines and cops (Copsucker). Uncle makes most of his appearances here.

For all the simplicity of its language (like Cleland’s Fanny Hill, these titles, other in the endless double entendres, display barely a smidgeon of obscenity), this was a world of rigid rules. The porn-fans jargon as it were and what you saw was definitely what you got. These titles preach directly to the converted, the cognoscenti. Buttons are pressed, and sex-hungry men, their nasty habits uncontrolled, jump to Pavlov’s tune. They know what they want and, to play a little with H.L. Mencken’s remark in re the masses and democracy, deserved to get it good and hard.

A version of this post appeared on The Dabbler in 2011.

2 thoughts on “The Lexicography of Erotica”