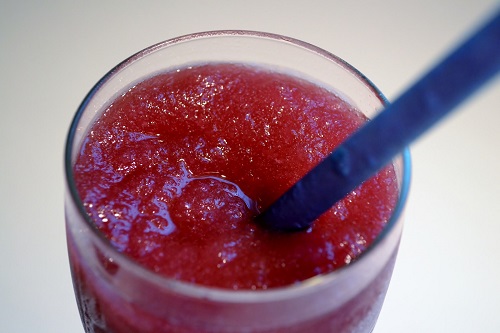 One of the drawbacks of having a wife who doesn’t drink very much is that it often means I drink more. Brought up by thrifty parents and taught at school to always finish what was on my plate, I hate to see things go to waste.  I’ve now got to an age where one glass over my usual two to three glasses can lead to either snoring or the dreaded waking up at 3am sick with worry about the mortgage or the price of cheese. So on one hand I have my frugal Scottish side and, let’s face it, my in-built love of booze screaming drink it and on the other my love of a good night’s sleep and marital harmony telling me not to.

Recently I was faced with a conundrum. We were going on holiday the next day and I’d picked up some Turkish food for supper. We had just under 1/2 a bottle of rose in the fridge (Chateau Barthes Bandol Rose, £9.99 at Majestic and really quite nice), not nearly enough to go with spicy grilled lamb for two. So I opened a bottle of red (Blind Spot GSM £7.50 The Wine Society.) Problem solved but after demolishing nearly half of the red I realised that I had to stop or they’d either be snoring, sleeplessness or even a hangover, none of them good when you have to get up at 5am to catch a flight. I’d have to let the wine go to waste unless of course i could preserve it some way.

Then I had a moment of inspiration/ light drunkenness, I popped the wine in the freezer and off we went to France. On our return I defrosted the bottle  curious as to how it would taste. It would have been interesting (though not very) to try the previously frozen wine against a fresh bottle but instead I had to rely on memory. It still tasted good but it was lighter, fruitier and simpler. A moderately serious wine had been turned into something frivolous and rather delicious. All went well until the last glass because at the bottom of the bottle was a purple sludge. That sludge was the seriousness that had been removed during the freezing process. I had inadvertently created Ice Wine.

Do you remember the craze for Ice Beer in the mid nineties? There was a lot of guff about smoothness and ultimate refreshment but actually the purpose of the ice process was to remove flavour from the beer. Tiny particles that contained beery tastes – yeast, hops etc. – were frozen and filtered out of the beer. The brewers had created something for those who found Sol a little too characterful. I think the big wine companies are missing a trick here. Many drinkers love bland products; many commercial wines are already chilled and filtered heavily. Instead of keeping it quiet, they should be shouting it from the treetops: Pinot Grigio Ice! Cava Ice! Sauvignon Blanc Ice! Come on marketing people, wake up!

3 thoughts on “How I invented Ice Wine”