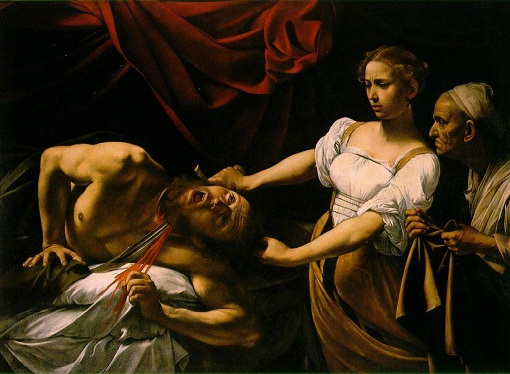 The ever-industrious Mr Key has lately embarked upon a complete retelling of The Bible (including the Apocrypha) in the Hooting Yard style. Here is an exclusive extract…

Holofernes put down his sack of grubbings on the floor and leaned to kiss the back of Judith’s hand.

“Your moustache is very bristly, Holofernes,” said Judith, “I fear it has raised tiny scratches on my hand.”

“Plunge it into a tub of ointment and it will be as right as rain, woman!” shouted Holofernes. Holofernes always shouted, he was that kind of general.

“Oh, never mind, Holofernes, I am fond of your moustache. It suits you. It is, how shall I say, decisive,” said Judith.

Holofernes picked up his sack of grubbings again. He was blushing slightly.

“I must take this sack of grubbings to my encampment, woman!” he shouted, “It will not do for me to dilly dally with a widow woman such as yourself.”

“What a pity, Holofernes,” said Judith, “I have just borrowed some interesting pamphlets by Dobson from the mobile library, and I thought you might like to join me in browsing through them. We could go and sit upon a municipal park bench, and take a picnic with us. I have some radishes and coleslaw and a jug of potato pulp diluted with rainwater.”

Holofernes was a sucker for pamphlets, particularly ones written by Dobson, and he needed little persuading to join Judith in the municipal park. The clouds were louring, however.

“See here, woman!” he shouted, after swallowing a mouthful of coleslaw, “If it begins to rain these pamphlets will get soaking wet and when you return them to the library on or before the due date there may be ructions!”

“I am sure you know a thing or two about ructions, Holofernes,” said Judith coquettishly, “But don’t worry, I have a tarpaulin here in my pippy bag and in the event of a downpour I can take it out and unfold it and place the pamphlets underneath it. Here, have another radish.”

Holofernes furrowed his massive forehead, as if deep in thought, but then seemed to relax and, taking the proffered radish, popped it into his mouth and crunched it. Judith caught a glimpse of his teeth.

“Have you had a recent dental checkup, Holofernes?” she asked.

“That, woman, is between me and my dentist! It is unseemly for a widow woman from Bethulia to pry into such matters,” shouted Holofernes.

“Forgive me, Holofernes,” said Judith, “I was forgetting my manners there for a moment. But I was a little concerned that you may need an appointment with the hygienist, for I clearly saw scraps of raw meat and carrots and cake-crumbs stuck between your teeth. You have not been flossing, have you?”

Holofernes’ temper flared. He stood up, picked up his sack of grubbings, and was about to stomp off out of the municipal park when there was a cloudburst and the rain began teeming down.

“Quick, Holofernes, help me to unfold the tarpaulin!” said Judith.

Two minutes later the Dobson pamphlets were safely covered up but both Judith and Holofernes were sopping wet.

“When the rain stops we ought to find a little boatman’s hut in which to dry off and get a nice cup of tea,” said Judith, “Just like Laura and Alec do in Brief Encounter after he falls into the boating lake. Come to think of it,” she added, “You remind me of Alec’s friend Dr Stephen Lynn, played by Valentine Dyall, except that Stephen didn’t have a decisive moustache and he was a bit of a prig. And you’re not a prig, are you, Holofernes?”

“I am a general in Nebuchadnezzar’s mighty army, woman!” shouted Holofernes, “And that is all you need to know!”

“Oh, you’re such a grumpy general, Holofernes,” said Judith, “You know what I think would be good for you? Some aromatherapy. But you strike me as more of a sweat lodge kind of chap.”

“Enough, woman!” shouted Holofernes, “You may seek out an humble boatman’s hut if you wish, but I must return to my encampment with my sack of grubbings. I shall dry off in my tent, which is a tent fit for a general!”

“Well, I shall come with you,” said Judith.

Holofernes grumbled, but he was secretly delighted, for there was something about this widow woman that intrigued him and inflamed his passions. They set off across the plains together.

“Tell me about Babylon, Holofernes, where your king Nebuchadnezzar lives. I have heard it is full of Rastafarians smoking ganja and moaning on and on, rhythmically of course, about their misery,” said Judith.

“As a general in the army, woman, I pay no heed to such countercultural doings,” shouted Holofernes, “I have enough on my plate keeping my troops on their toes and smiting mine enemies with a big sword.”

“Ooh,” said Judith, “You’ll have to let me see that big sword when we get back to your encampment, Holofernes.”

Later, of course, when they were in Holofernes’ tent and he showed Judith his big sword, she used it to slice his head off. Then she went back to Bethulia, carrying the head of Holofernes, and was received in triumph by her people.

3 thoughts on “Judith And Holofernes”