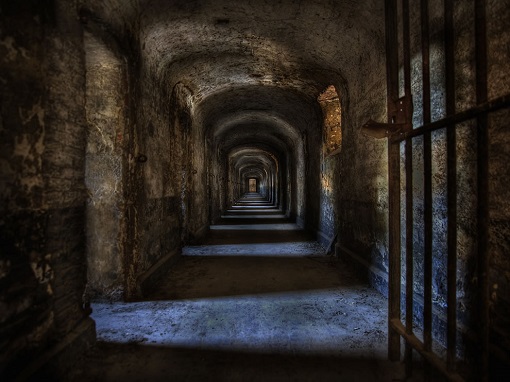 A very spooky tale for Friday the thirteenth…

Listen, tiny ones. It is Friday the thirteenth, so if you are good I will take you on an outing. I will take you to the old balsa wood factory on the edge of the big blue lake. Every Friday the thirteenth at two o clock in the afternoon, there is a tour of the factory especially for tots. The hooters sound and everyone lines up at a kiosk in the car park, and Mister Verdigris appears in his towering hat, with bells on his sleeves, and ribbons and bunting, and hamsters nestling in his pockets, and he takes the lucky children, the ones with tickets, on a tour of the factory.

I was sent some tickets in the post yesterday, as a special treat. I know that Tim the radio meteorologist says that Friday would be a day of driving rain and howling gales, and I know that it is the fourth day of our fast, and we will be famished, but I am determined that we go. The alternative is that we spend yet another afternoon trying to tether the wild goats, and I am not sure I can take much more of that, so the balsa wood factory it will be.

First there was the grass verge of the car park, and then a lawn, some derelict outbuildings, including a shed wherein rotted the remains of the hanged janitor, and then the factory itself, its cavernous interior lit by thousands of gas jets, and eerily silent save for the occasional buzzing of a saw or the distant, insistent pounding of a pulveriser from the annexe over beyond the railway tracks, a sound borne in on the wind.

After that, up the metal stairway to the offices, always deserted on Friday afternoons, even tiny footsteps making the floorboards creak, and shelves upon shelves stacked with higgledy-piggledy piles of files and papers and dockets, and Mister Verdigris took the hamsters from his pockets and placed them on a bed of straw next to an important-looking desk, its surface polished to such a gleam as left the children dumbfounded, and resting on it nothing but a fat, new fountain pen and the biggest bottle of ink you could imagine, and the pen had never been used and the bottle never opened, for the cap of the one and the lid of the other were both jammed tight by dint of mischievous sprites that scampered in the rafters overhead.

And it was up to the rafters now, up to the attic, past boxes and crates filled with rusty and inexplicable machines, redundant cash registers and forgotten magnetic recording devices, through a narrow corridor littered with broken brooms, and host to a mysterious gurgling noise, until we reached the chamber at the end, and our tour guide in his towering hat kicked open the door, so violently!, and we entered a room lit in a blue, blue glow, like heaven, and there in the corner, sprawled on a divan, we saw Pinocchio, dexterously plucking flies out of the blue air with his tiny wooden fingers, and biting the tiny head off each tiny fly with his tiny wooden teeth.