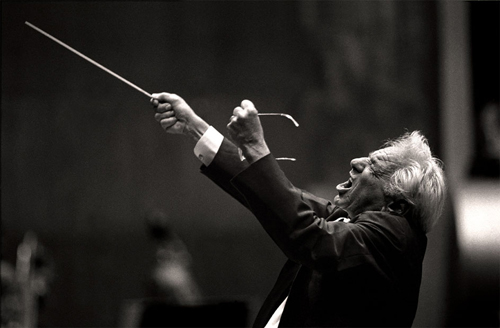 ‘His need to be appreciated, admired and loved was borderline paranoid,’ says Mahlerman, as he asks: ‘Who was Leonard Bernstein?’…

Rummaging through a shortlist of Ukrainian musicians for my post a couple of weeks ago, I briefly considered the inclusion of the great musical polymath Leonard Bernstein, as both his parents were Ukrainian Jewish immigrants to the USA, and technically he qualified – but I quickly realised that this titan, this musical monarch, was just too big to be slotted in among relative pygmies ( even if one of them was Tchaikovsky ). Lenushka needed a post of his own.

Born in Massachusetts as the Great War was ending in Europe, his father Sam hoped that his son would eventually join him in the wig & beauty products business ( ‘In Boston, It’s Bernstein’ was inscribed on the vans ) he was building, but young Lenny had other ideas when he discovered the power of music –  I struggle to imagine Bernstein selling beauty products!  His spectacular musical career and complicated sex life, were pored-over even before his death in 1990, and the tide of smut has continued, unabated, in the quarter-century since.

So who was Leonard Bernstein? Well for me, if he leaves any kind of profound legacy of lasting value, it is the patrimony of teaching. His grandfather was a rabbi, his father considered the discipline, and Lenny himself, remembering that Judaism is based upon communal experience, was almost seduced – but in fact he was an ecumenical lover of the world, and well before middle-age the world loved him back, in all his avatars. He was just forty years old when he took over as principal conductor of the New York Philharmonic and he immediately re-started the tradition of Young People’s Concerts, all of which were televised, at first in scratchy black & white, later in rather garish colour. Here is part of one of the earlier programmes where he explains, without condescension, how ‘I want it’ (let’s call it yearning) is expressed musically, employing the useful tool of Tchaikovsky’s F minor Symphony.

Bernstein had inscribed on his passport ‘musician’ but, of course, he was much more than that. His appetite for life, in all its frenzied manifestations, was insatiable (‘I want it’). He understood how self-centred he was. His need to be appreciated, admired and loved was borderline paranoid, particularly when you consider his film-star looks, intelligence, and personal magnetism. Also in the debit column, he could be boorish, pompous, theatrical, hammy and, almost always, over-the-top in his hydra-headed success. Questioned about the coda of the last movement of the first symphony of Jean Sibelius he said “Two chords – that’s it – as if to say ‘fuck you’, if you don’t like it, go home”.  Did his reach exceed his grasp?  Quite often – but he was wise enough, far sighted enough, to catch the wave of television and make it his own. Here he is in a short clip from one of the half-dozen Norton Lectures at Harvard. Delivered under the title, borrowed from composer Charles Ives, ‘The Unanswered Question’, they range far and wide over the cultural landscape of the 20th Century, but are best known as beautiful examples of how to make complicated material (musical syntax, musical semantics) accessible – and they do.

Half of Bernstein’s achievements in the biblical ‘allotted span’ would be more than enough for most of us; but for Lenny ‘enough’ was always just out of reach. He craved the respectability accorded to his musical idols, particularly Gustav Mahler; and he feared that he would be forgotten as a musician, and only remembered as a composer of ‘show tunes’. Well, even the hardest heart has been known to melt in front of the imperishable masterpiece that is the quasi-opera West Side Story and, for me, Candide runs it pretty close. And both these great works and many others, are packed with perhaps the lodestone for this complex composer – melody. He idolised Gershwin and Berlin, but as a tunesmith was he really standing in their shadow? He was still in his twenties when the musical On The Town made his name, almost overnight. From the second act of this great score, a typical piece of simple Bernstein magic in the plaintive Some Other Time, sung here by the late Monica Zetterlund, supported by the remarkable, classically-trained Bill Evans, in turn underpinned by bassist Chuck Israel and drummer Larry Bunker. How proud Mahler would have been to have coined such a little meisterstuck.

Was Lenny a born teacher, or a born student? Was he a composer, or a conductor? Was he a genius, or a narcissist? Was he emotional, or just sentimental? Was he a devoted family man, husband and father, or a promiscuous homosexual who got married? Well, in each case it seems quite clear that he was both. After the death of his wife he sank into a deep depression, fuelled by guilt (she knew), six packs of Kent a day, and plenty of Scotch – but he looked into the abyss, and turned back. By 1970 his homosexuality was no longer hidden, but was well accommodated within his vast fame (and fortune – only the ‘Nazi’ Karajan earned more). His long-time friend Paul Bowles became estranged at this time, reporting that Lenny had become ‘smarmy and false’, but this may have been a reaction to the gay world that Bernstein now inhabited. About to visit The Pope in Rome, a friend quipped ‘Remember, the ring, not the lips’.  And when considering whether to conduct the Cooke version of Mahler’s unfinished tenth symphony (he never did), he turned to a colleague and said ‘ I have one question – will it give me an orgasm?’. Can you imagine Karajan asking such a question? 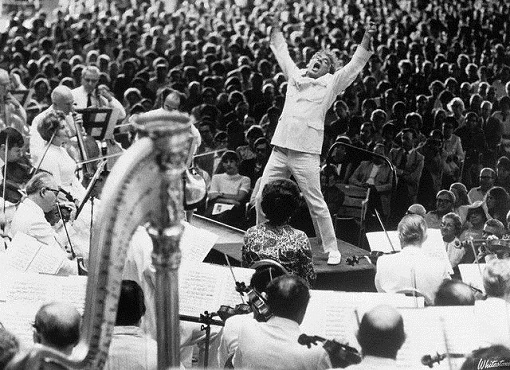 His boorishness can be seen in this short clip from the BBC Symphony Orchestra in 1982 rehearsing Elgar Enigma Variations in London. By this time he was living the life of a Roman emperor, and obviously found any sort of humility difficult or impossible. He spoke not of Elgar, but of ‘Eddy’, and fast speeds (as here) were cranked-up to the point where they became unplayable, a fact made clear here by Rodney Friend, the virtuoso concertmaster – who was, of course, ignored.

Slow movements were extended wilfully to often twice their normal length, most memorably in the famous Adagietto from Mahler’s Fifth Symphony, where Lenny ‘lingers’ to a point where forward motion almost ceases to exist. Although there are those for whom he can do no wrong, when I listen to this version of Nimrod from the Enigma Variations by ‘Eddy’, my heart goes out again to Rodney Friend, manfully trying to keep things going when the movement seems set in aspic.

And yet… descended from rabbis, he was a rabbi at heart.  Everything he did was a form of teaching, and he taught in the Talmudic style for my generation, in a way that nobody has since, nor did before. And why, when he had such respect for the Hebrew/Jewish culture, should we dismiss his proselytiser’s zeal? That zeal was never more evident than when he was on the podium – a podium he fell from a couple of times in his later years. Nodding, swaying, sweating, grimacing, and jumping into the air, I saw him conduct a routine Schumann 3, and a coruscating Shostakovitch 5 in New York in the mid 70’s; let’s just say that economy of motion was not his strong suit at that time. Seeing him again in the last year of his life, conducting Candide at the Barbican, the love he retained for that troubled but marvellous work was clear for all to see. And I have to pinch myself when I think that I saw Jerry Hadley, June Anderson, Christa Ludwig, Adolf Green, Della Jones, Kurt Ollmann and Nicolai Gedda on the same stage. What larks, Pip!

To end, a vid that shows the love that this great musician carried around the world, donating from his store wherever and whenever he might be welcomed, as here in Vienna’s Musikverein. The Wiener Philharmoniker have this music in their blood, of course, but the perpetuum mobile buzz and humour of this con spirito final movement of the Symphony No 88 in G major by Joseph Haydn is set in motion by the little man standing in front of them doing very little – save the winning smile and the darting eyes; for once he did not let light in on the magic.  And did you notice at the end that all those stuffy, bourgeois Viennese were smiling? That was Lenny – a real mensch.