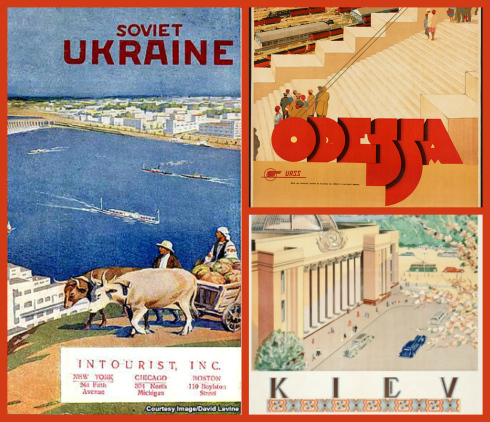 With the world’s eyes on the Ukraine, Mahlerman considers the musical history of that troubled region…

Unlike the 85% of Americans that apparently cannot locate Ukraine on the map, I know where it is and what it means to me, and it is rather more than ‘a country in South Eastern Europe with borders on the Black Sea’. At the time of writing, the fate of this ‘global breadbasket’ of 50 million souls is uncertain, but it is quite possible that during the whole of its roiling history, nothing has been learned, and there is no mistake that will not be repeated, by both aggressors and defenders. Perhaps a thousand years of Russian influence is going to be difficult to break.

Sitting on the edge (the name literally means edge or border) of its vast neighbour, it does look like Malorossiya or Little Russia but it is worth remembering that it is bigger than France and, for the purposes of this post worth remembering also that as well as feeding much of the world, it has a distinct and illustrious cultural heritage, particularly in music.

The puzzle, for me at least, is why the country has and continues to produce a constant stream of world class re-creative musicians, but relatively few great composers – Sergei Prokofiev and the still living Valentyn Sylvestrov (both featuring in these pages over the years) are the only two titans I can bring to mind, along with some second division talents (Gliere, Roslavets, Lyatoshynsky)?

Pyotr Ilyich Tchaikovsky, though not Ukrainian, certainly had Cossack lineage, and drew upon these roots throughout his life – and though not thought of as a Nationalist composer, his great knowledge of Ukrainian folklore, and the melodiousness and lyricism of its music, liberated him to ‘borrow’ from the dozens of tunes he heard during extended periods in the country. In 1872 the composer was thirty-two and just beginning to make a name for himself, when he started work on his Second Symphony in C minor (Little Russian) whilst staying at the Ukrainian estate of his friends the Davidovs near Sumy. We think of Tchaikovsky, with some justification, as the master of melancholy, but this work, borrowing in movements 1, 2 and 4 from Ukrainian folk tunes, is full of uncharacteristic joie de vivre, and was a huge success at its first performance, and after. However, the composer’s habit of expressing enormous faith in a piece during composition, and following this with a period of disenchantment, soon cast a shadow, and several years later he produced an extensive revision of the score. From that revision, here is the fleet, diaphanous, balletic third movement Scherzo conducted by the Muscovite Yevgeny Svetlanov who, a quarter of a century ago, made the London Symphony Orchestra sound completely ‘Russian’ in repertoire such as this. The ABA form was used often by the composer, with here the outer sections in triple time, and the trio in duple time – a magical sleight of hand packed into just five minutes. Like so much of Tchaikovsky, this could be ballet music.

The Ukrainian-born American violinist Issac Stern, when questioned at the height of the Cold War about tensions between the US and USSR, and in particular the lack of political freedom of (then) Soviet Jewry, put cultural diplomacy in the simplest terms he could by saying ‘They send us their Jews from Odessa and we send them our Jews from Odessa’. What is it about this city, that produced so many musical giants in the last century? Pianists Emil Gilels, Benno Moiseiwitsch, Vladimir Pachmann and Shura Cherkassky were all born there, as were violinists Nathan Spivakovsky, David Oistrakh and his son Igor, and Nathan Milstein. Move out of Odessa to Kiev and other cities and the story is much the same: the conductor Jascha Horenstein, pianists Vladimir Horowitz, Sviatoslav Richter, Heinrich Neuhaus, Alex Brailowsky, Emanuel Ax, Valentina Lisitsa, and string players Leonid Kogan, Mischa Elman, Gregor Piatigorsky and Emanuel Feuermann – all took their first breath in Ukraine. Could there be something in the water?

Jascha Heifetz (Lithuania) was often called ‘The King of Violinists’, but it was the Polish virtuoso Henryk Szeryng who called David Oistrakh ‘The Emperor’, for his seemingly faultless technique and burnished tone that made him the violinist’s violinist. Everything he touched turned to gold, and he could bring weight and beauty to even the slightest pieces. Here he is in 1972, in the Great Hall of Moscow Conservatory with his regular accompanist Frida Bauer, playing as an encore the Prelude A girl with flaxen hair by Claude Debussy, the difficult harmonics played with complete assurance.

The Estonian Arvo Part has said that ‘Valentin Silvestrov is one of the greatest composers of our time’ and, somewhat belatedly, the rest of the world is beginning to realise that Part was right. The amazing Bagatellen have, under their deceptively simple exterior, an exceptional, improvisatory inner-life which the composer calls, enigmatically, the ‘materialisation of the immaterial’. Other commentators have struggled to put into simple language quite what this often painfully beautiful music means to them: ‘a dialogue with silence’ – ‘time, in Silvestrov’s music, is a black lake’ – ‘constantly ending, only to begin again’ – and, much the same as many of the films of Tarkovsky, who called filming ‘…sculpting in time’, so Silvestrov regards himself as a messenger, bringing tidings from a half-forgotten world, for which all human beings yearn – and there is a sense that this is music for the end of time, the end of music, in fact ‘stopped time’. For Dabblers who prefer music on a large canvas can I suggest the composer’s single movement, 40 minute Fifth Symphony. For those who respond to the Schubertian sound-world, I would say listen to the extraordinary Silent Songs, played on Lazy Sunday last year. The Bagatellen 1 & 2 are played in the Rachmaninov Hall of the Moscow Conservatory by Alexey Chernov.

For many years the moribund classical music industry, feeling threatened by the advance of the internet, illegal downloading, the death of the CD et al, retreated into a shrinking world. It took a brilliant pianist in her mid-30’s to show the industry that it may indeed have a future if it embraced the medium, with enthusiasm. Valentina Lisitsa was born in Kiev, Ukraine in 1969, studying at the Conservatory before embarking on a career as a concert pianist, a career that foundered after a few years. She then, without realising what might happen next, became the symbol of a new business model for classical music, by posting a modest piece of Rachmaninov on to YouTube. That was seven years ago, and the uneven version of Etude Opus 39 No. 6 has currently scored approaching two million hits, and been joined by 250 further videos on the pianist’s own channel, all totalling close to 80 million hits. Valentina has become, in her mid 40’s, a web sensation – nobody else in classical music comes close. But the best news is that she is not a circus act; she really can play – and her spiky-quirky personality, her thickly accented Russo-English and, above all, her staggering pianism will, I believe, very soon turn her into a soloist of world renown.

I my last post the film clip from L’Eclisse was linked with the idiomatic middle movement from the Piano Sonata No 7 by Valentina’s fellow Ukrainian Sergei Prokofiev. Equally idiomatic, and explosive, is the three minute third movement, marked Precipitato – think ant-hill with petrol poured on top, and lit. Richter had no equal in this work, but Lisitsa runs him very close.

2 thoughts on “Little Russia – Music of the Ukraine”