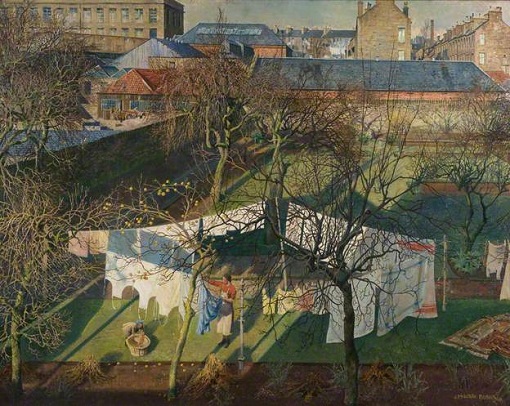 In today’s Dabbler Verse feature, two poems about hanging out the washing…

Ivor Gurney was extremely sensitive to changes in the world around him, be it the weather or the seasons. Of course, one could argue that any “nature poet” (e.g., Edward Thomas, Andrew Young, John Clare, William Wordsworth) necessarily possesses such a sensitivity. But in Gurney this sensitivity was particularly acute.

I am reluctant to attribute Gurney’s qualities as a poet to his sometimes precarious mental condition. It would be unfair to him to suggest that his sensitivity was a product of that condition. At the risk of sounding romantic, I think that Gurney can be likened to Vincent van Gogh: the sensuous presence of the world — everything in it — was so deeply felt by both of them that they were constantly at risk of being overwhelmed (both physically and mentally). It would be a disservice to them to describe their sensitivity as a pathology. Perhaps we are the ones who need to catch up with them.

When March blows, and Monday’s linen is shown
On the goose berry bushes, and the worried washer alone
Fights at the soaked stuff, meres and the rutted pools
Mirror the wool-pack clouds, and shine clearer than jewels

And the children throw stones in them, spoil mirrors and clouds
The worry of washing over; the worry of foods,
Brings tea-time; March quietens as the trouble dies.
The washing is brought in under wind-swept clear skies.

The subject of the washing drying in the wind brings to mind a lovely poem by Andrew Young.

The smear of blue peat smoke
That staggered on the wind and broke,
The only sign of life,
Where was the shepherd’s wife,
Who left those flapping clothes to dry,
Taking no thought for her family?
For, as they bellied out
And limbs took shape and waved about,
I thought, She little knows
That ghosts are trying on her children’s clothes.

4 thoughts on “When March blows”