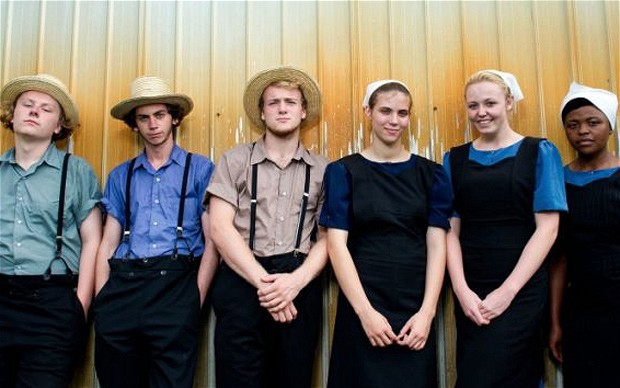 Rumspringa is a term for an adolescent right of passage observed in some Amish communities. Rumspringa is a Pennsylvania German noun derived from the verb rumspringen (“to jump around”.) Not all Amish use this term, but in sects that do, Amish elders generally view it as a time for courtship and finding a spouse. A popular view exists by which the period is institutionalised, and the usual behavioral restrictions are relaxed, so that Amish youth can acquire some experience and knowledge of the non-Amish world.

The Rumspringa normally begins around the age of 14 to 16 and ends when a youth chooses baptism within the Amish church, or instead leaves the community. It is the period when the young person is regarded as having reached maturity, and is permitted to attend the Sunday night “sings” that are the focus of courtship among the Amish; according to Amish sources, a youth who dares to attend one of these events before reaching the age of sixteen might be forcefed warm milk from a spoon, as a good-natured reminder to observe the lines of status.

Not all youth diverge from custom during this period; approximately half in the larger communities and the majority in smaller Amish communities remain within the norms of Amish dress or behavior during adolescence. Almost ninety percent of Amish teenagers choose to be baptized and join the Amish church.

Some Amish youth do indeed separate themselves from the community, even going to live among the “English”, or non-Amish North Americans, experiencing modern technology and perhaps even experimenting with sex, alcohol and illegal drugs. Their behavior during this time represents no necessary bar to returning for adult baptism into the Amish church.

In some cases, patience and forbearance prevail, and in others, vigorous discipline. Far from an open separation from parental ways, the misbehavior of young people during the rumspringa is usually furtive, though often collective (this is especially true in smaller and more isolated populations). Groups of Amish adolescents may meet in town and change into “English” clothing, and share tobacco, alcohol and marijuana; girls may put on jewelry and cosmetics. They may or may not mingle with non-Amish in these excursions. The age is marked normatively in some Amish communities by allowing the young man to purchase a small “courting buggy,” or — in some communities — by painting the yard-gate blue (traditionally meaning “daughter of marriageable age living here”. There is some opinion that adolescent rebellion tends to be more radical, more institutionalized (and therefore in a sense more accepted) in the more restrictive communities.

In 2010, the Channel 4 broadcast a television documentary series entitled The Amish: World’s Squarest Teenagers, focusing on five young Amish who traveled to the United Kingdom during their Rumspringa in order to participate in an arranged cultural exchange. In each episode the group stayed with British families of different socio-economic levels, living in turn on a South London council estate, the Kent countryside and even staying at a Scottish hunting estate. During their visit, they were introduced to diverse and unfamiliar things, including sex shops, street dance, single mothers, stabbing and street violence, rock music, beach parties, game shooting and polo.